Guerrilla Games, known most famously for their work developing the PlayStation exclusive Killzone series has once again brought their forte for crafting first-person experiences to the likes of virtual reality. As one of the launch titles for Sony's ambitious PlayStation VR, RIGS Mechanized Combat League brings together FPS gunplay with smaller squads and tactical sports action. So, how does it feel to strap into a virtual cockpit and play the bloodsport of the future?

To break down RIGS into its simplest form, the Mechanized Combat League is focused on three-versus-three gameplay with the FPS mechanics focusing not on the players themselves, but having the players instead pilot hulking power suits known as RIGS in arena combat. This helps propel the narrative of why the player at home has to stay seated with their VR headset on but are free to run around the battlefield at their own pace.

The various RIGS themselves are separated into four distant core classes, each with varying movement abilities and sizes. From there, they’re sorted into categories based upon an automatic ability. These abilities give each class a unique role on the battlefield. Whether you’re like me and prefer to be a supporting healer class or the kind to rush into battle and drop a nuke once your Rig is destroyed (which CAN damage teammates if not used tactically), these classes each have a strong ability that can easily be put to use by those who know how to handle their machine.

No two RIGS are created equal in terms of raw firepower. Each class and ability of rig have their own set of dual-wielded weaponry that’s locked to that particular frame. If there’s a specific weapon you want to take into battle, chances are you’re going to only find it on one or two models and not necessarily on the class that’s suited for your playstyle. Without the option to freely customize a Rig to one’s liking, there might be times when you want to bring along something like a rocket launcher but not be able to fully utilize the class you’ve selected because you’re not a fan of a particular chassis. It feels like an oversight on Guerrilla’s part but I can begin to understand the tactical reasoning behind such a design choice. If every member on both teams brought along dual rocket launchers and the Nuke ability, that might not be very fun right..? Who am I kidding? That’d be a BLAST! 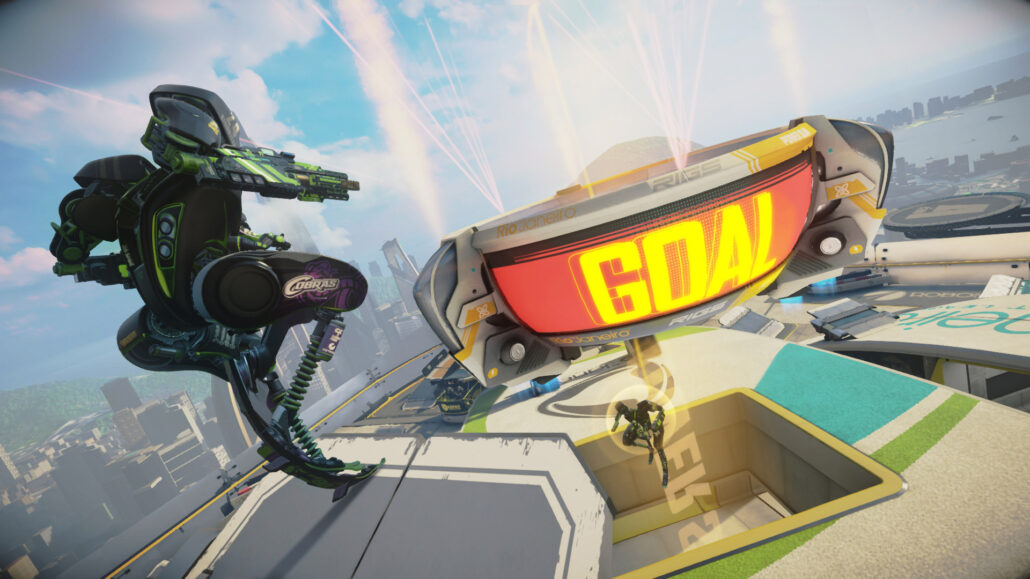 To incentivize players to step outside of their comfort zone and try out some new rigs, sponsor endorsements help shake things up and give a little carrot-on-a-stick love to the type of players that enjoy tasks such as earning diamond camo on their weapons in Call of Duty. These challenges are separated into online and offline tiers, each offering a different pool of rewards. For completing each sponsorship, various customization items such as new uniforms or post match MVP dances are unlocked the first time a sponsorship is completed with repeated accomplishments netting some extra cash for purchasing a new rig. Usually, these challenges were fairly straightforward, from earning a number of new followers or getting a sizeable killstreak in a particular mode. For whatever reason, scoring a touchdown assist in Endzone proved to be one of the trickier endorsement deals for me.

While RIGS thrives in terms of challenges and leagues to play through, the framework for the actual game is a little starved. RIGS offers three different modes to play around with across just four maps. Team Takedown is your standard TDM affair, with victory going to the team that can coordinate best and bag the highest number of kills. EndZone is a take on American Football where teams vie for control of a ball and rush to bring it back to the opponent’s goal area. Lastly, PowerSlam is the mode that most players are familiar with if they’ve attended events with PSVR on demo before. In this mode, players have to jump through a hoop in a form of mechanized basketball to score points; the caveat here is that the only way to score points is by being in Overdrive Mode.

RIGS’ power suits offer three different power modes at the press of a button. Depending on the situation, a bit of extra movement speed or added damage to the suits’ dual weapons might be more important than the other. Since I usually play the healer type in competitive team games, I gravitated towards the repair mode most often. This restored my RIGS’ damage at a quicker pace and with the type of rig I usually opted for, had the added ability to restore my teammates’ health just by looking in their direction. Overdrive mode turns all three of these modes on simultaneously and is easily filled either by scoring kills or collecting power orbs scattered across the map.

RIGS is one of the most fun and pure multiplayer experiences I’ve had on the PlayStation VR when you can get a group of people together for 3v3 action. That being said, it’s also a game that’s better suited for shorter play sessions of only a couple matches at a time. The head tracking is spot-on and is bound to give some players neck cramps in the more frantic firefights. Guerrilla Games took the consideration of comfort into account when designing some of RIGS’ core systems. By giving players a narrower field of view (which can be disabled for more screen real estate), it forces players to keep their eyes closer to the center of the headset. Wandering around and watching the edges of the screen might give some players some discomfort.

Another feature that’s recommended to be disabled is being able to view the playing field while ejecting. While this gives a nice tactical advantage to see the world overhead, many players (including myself) might feel uneasy with the sudden vertical launch. By toggling this off, players are instead left with a black screen ahead of their HUD overlay and a map that’ll allow them to toggle where to respawn back in the action. The map still allows players to see where their teammates are on the field and adjust their spawn point accordingly but there’s a little bit of information that’s lost with this comfort setting.

Whether you’re looking for a first-person shooter fix on PlayStation VR or want to play a few matches with your friends, RIGS is the multiplayer sport I’ve been waiting for on Playstation VR. While the lineup of maps and modes is a little on the light side, I kept coming back day after day, one match at a time, always gunning for the league’s Top Gun award.

While the lineup of maps and modes is a little on the thin side, RIGS Mechanized Combat League was a multiplayer experience I kept coming back to day after day. It's easily the best one available on PlayStation VR right now.