Racing games can be some of the most fun games to play, letting you try driving maneuvers that you wouldn’t dare to even think about attempting in real life. J-turns, drifting, you name it. But Carmageddon Reincarnation isn’t a racing game, this is a driving murder simulator. And you know what? That in your face violence is exactly what draws you in. If you aren’t squeamish, then read on, you might find a video game that suits you more than you think.

Carmageddon Reincarnation is Exciting and Hilarious

Hilarious might not be the description everyone is going to give the newest installment, Carmageddon Reincarnation, but I think it’s fitting if you bring a light-hearted look at quite possibly one of the most comically violent games ever. If you don’t have a sense of humor, then this game certainly isn’t for you.

Very few games have had the kind of history that the Carmageddon franchise has had. Banned in Brazil, and condemned by the Pope himself, it wasn’t an easy battle to become the prominent name it has. Because of the negative media, however, it gained a cult-like following that’s been partly responsible for the reincarnation we see today.

Carmageddon Reincarnation is bold, it’s bloody and it’s beautiful. There are 36 different characters, each with unique vehicles that handle differently and offer different ways of slaying those helpless pedestrians. But instead of just racing, you get rewarded for destroying your opponents, the environment and, of course, running over as many pedestrians as you can. I ended up playing as Max Damage with his car, Eagle R, most of my time. He’s one of the originals and is still my favorite out of all of them.

This is a remake, certainly, but it’s more than just slapping a new coat of paint over an old concept. No, instead the good folks at Stainless Games added a lot of things that make it very much worth your while. Free-roam is actually a lot of fun, now. The maps are large enough to be interesting for some time, with a lot of things to destroy. The AI is incredibly smart and very challenging. Tricking them into hitting a wall or going off of a jump while racing around is incredibly satisfying, if only because it’s hard. And of course, the soundtrack is classic Carmageddon, though not from Fear Factory it still accurately represents the carnage about to take place.

I couldn’t help but grin ear to ear as I did donuts in the stadium trying to hit all the football players while skidding. It was a blast, and I didn’t even care about the race itself, which I was 4 laps into. It’s easy to get lost in the carnage, no matter how clear and in your face it is. The gore, which is certainly bloody and detailed enough, was actually priceless. So enjoyable gunning down the various denizens. Mind you, I’d never drive like this in real life, but it’s so entertaining here.

It is definitely and precisely what it says it is, a 3D destruction derby filled with murderous violence. But that’s why people play it, and why it has such a devout following. It’s atrociously good.

Not all is well in paradise, however

Even though it was just released, there are definitely a few issues to be had. Performance is absolutely atrocious. Beyond atrocious. At 1440P with everything on high, I only get a maximum of 47 FPS and a lot of stuttering. 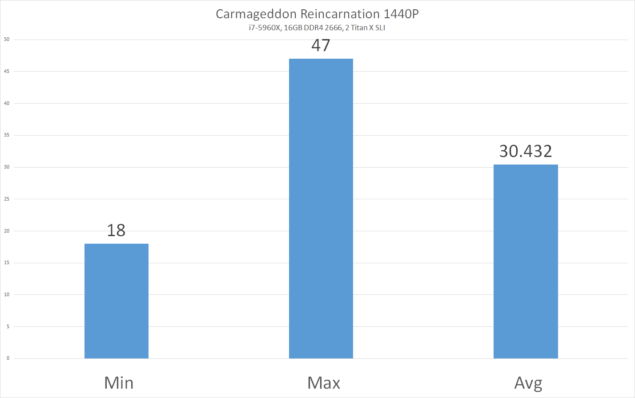 I also came across a few graphical glitches, with textures bending in ways that they probably shouldn’t be, and it also crashed a few times. And just as it’s been reported elsewhere, loading times are incredibly long, even with a PCIE base M.2 drive.

If you can get past those few niggling negatives, then you’re in for a wild ride. A great ride. The destruction models and advanced AI make for one hell of a game. Hopefully the multiplayer will pick up, however, so that more online destructive fun can be had.

So yeah, it’s a murder simulator, but it’s a fun murder simulator. And, after all, it’s a game. So enjoy running over grandma and her dog, or cow, and don’t forget to throw an anvil at people every now and then, it’s the gracious thing to do. Sharing is caring.

This is indeed the Carmageddon you've been waiting for. It's not the prettiest looking game, and it's only singular in its purpose. But it succeeds far greater than they probably could have imagined. This really is the cure for racing games.