Regalia: Of Men And Monarchs Review – Reclaiming What Was Lost

Regalia: Of Men And Monarchs

Following the days of Tactics Ogre: Let Us Cling Together and Final Fantasy Tactics: The War of the Lions, tactical role-playing games have been out of the spotlight, with only a few games, like the latest Fire Emblem games and The Banner Saga, managing to get some well-deserved recognition. Traditional Japanese role-playing games haven't had it easy as well, with only big games like Final Fantasy XV and the recently released Persona 5 getting recognition. With the genre as a whole struggling a bit, at least compared to 15/20 years ago, would the situation change if one was to take the best features of both tactical and traditional JRPG and mix them together while adding elements of other types of strategy games?  We cannot know for sure know, but we did get a game like Regalia: Of Men And Monarchs, a fun role playing game that manages to properly tribute JRPGs despite being derivative.

Regalia: Of Men And Monarchs was funded via Kickstarter in 2015. The game stars Kay Loren, a young man who finds out right before his father's death that he is actually the rightful ruler of the Kingdom of Ascalia, a kingdom that has fallen on hard times following a series of circumstances. Not one to give up on adventure, Kay sets out for Ascania together with his sisters and his bodyguard Griffith only to find out that not only the kingdom is in a very sorry state, but also that he has a huge debt to pay back, as some of his ancestors were way too happy to spend money. With the help of the ghost of his grandfather, Kay accepts his role as Ascalia's ruler, hoping that his efforts will be enough to restore the Kingdom to its former glory. 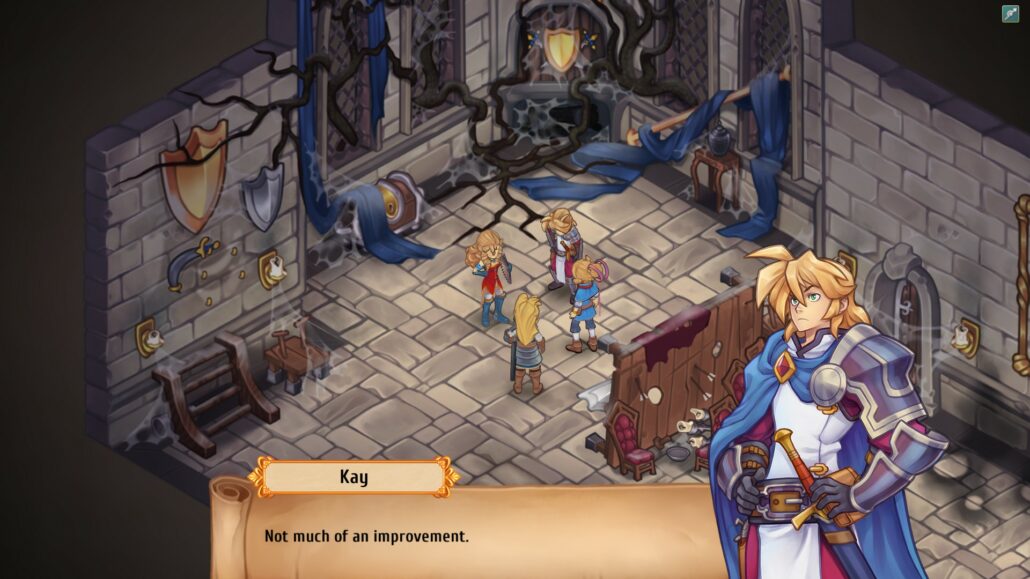 The story is not exactly the most original you'll find in the genre, but it's made quite enjoyable by the plethora of charming characters players will meet during the adventure. From the loyal Griffith to Signy and the living armor Levant, all characters have their quirks that make them recognizable and enjoyable. All NPCs also come with their own unique personalities, making the whole restoration ordeal feel very personable and involving. Making things even better is the Persona influenced relationship mechanics, which allow players to get better acquainted with both party members and NPCs, unlocking a variety of bonuses in the process such as new perks and more. Meanwhile, the humorous writing gives a charming light-hearted feel to the whole adventure.

The relationship mechanics isn't the only Regalia: Of Men And Monarchs feature that's been influenced by other RPGs: almost all of the game's experience has been inspired in various ways by other titles in the genre. The game's basic structure has also been influenced by recent Persona games, with players having to complete certain tasks by a deadline. Interacting with characters, adventuring, building structures all require time, so wise time management is key, as engaging in a single type of activity over and over will lead to issues later on.

As already mentioned, Kay's final objective is the final restoration of Ascalia, and to do so, the Kingdom itself requires people and the right structures. At any time while in the castle, players can decide to build and enhance facilities, which require money (hilariously called DLC) and resources that can be obtained by exploring dungeons. Dungeon exploration is done in a very interesting way: all dungeons require a set amount of days to explore. Those days will be consumed even if the players decides to escape from it without checking out all the nodes. Nodes in dungeons may include battles, camps, where players can heal characters and save, and text adventures, where players can make a variety of choices to solve issues and obtain rewards. This unique way of exploring dungeons makes them quite interesting, as players must plan ahead on when to use the camp depending on the number of battles in the dungeon: if a character is KO'ed, he or she won't be able to take part in battles until healed at camp or at the castle. 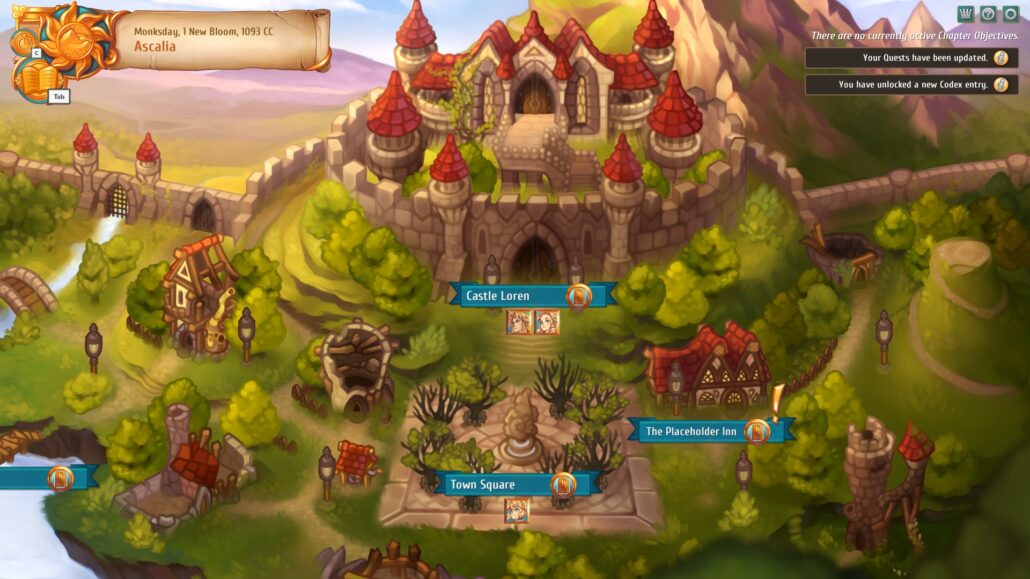 Planning carefully isn't a requirement for just dungeon exploration, but also for battles, as Regalia: Of Men And Monarchs can be quite challenging. At its heart, the game uses a tactical turn-based battle system where players and enemies take turns to move characters on the battlefield and execute actions. Each playable character comes with a set number of skills, some of them with a cooldown timer in place of MPs or similar mechanics. One special, powerful skill can be used by spending Authority Points, which can also be used to unleash Blitz, granting a second turn once the first has ended. As one single Authority Point is earned at the beginning of each turn, players have to be careful in managing them, since Blitz and special skills can turn the tide of battle when things go wrong. And it's easy for them to go wrong, as the enemy's AI is quite smart and will do everything in its power to go after vulnerable characters. Another interesting mechanic which makes battles involving and challenging is the complete lack of in-battle healing: the only way to keep HPs from depleting is by increasing Shield Points, which aptly act as a real shield, getting depleted first in case of attack. With maps, skills, objectives and enemy formations being quite varied, additional Challenges which grant bonuses on completion and more, battles in Regalia: Of Men And Monarchs never feel dull. 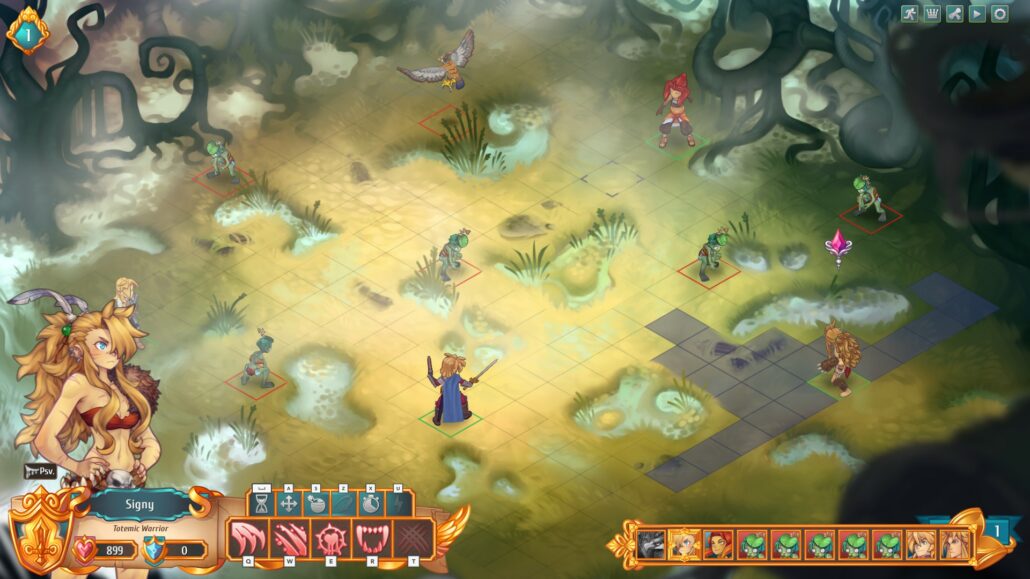 Like for the rest of the experience, Regalia: Of Men And Monarchs' presentation isn't very original but it definitely helps in conveying the light-hearted feel of the whole adventure, with 2D sprites and backgrounds looking colorful and lively. The soundtrack is also a callback to the soundtrack of JRPGs from the 90s and early 2000s, with soothing orchestral tracks and more rocking battle tunes alternating at the right time. Sadly, voice acting is not up to par, with most characters sounding weird, with only a few exceptions. The team has to be commended for adding voice acting to most story sequences, but the end result is definitely not what most expected.

At the end of the day, I have thoroughly enjoyed my time with Regalia: Of Men And Monarchs, and will definitely come back to it at some point. The game developed by Pixelated Milk manages to properly do what it set out to do, tributing JRPGs in the best possible way. The lack of any real innovation is a clear issue, but do not let this put you off, especially if you're looking for a challenging tactical role-playing game that doesn't pull any punches.

PC version tested (review code provided by the publisher). You can buy the game's full soundtrack via Amazon.

Regalia: Of Men And Monarchs does quite well what it sets out to do, tributing classic JRPGs by mixing a variety of features and mechanics. While not overly original, the game developed by Pixelated Milk manages to be quite entertaining thanks to the charming characters, lighthearted tone, and challenging battles. If you loved JRPGs back in the 90s, early 2000s, you will find plenty to like in Regalia: Of Men And Monarchs.