Offworld Trading Company is all about running a business whilst in the depths of space. Unlike many other strategy games of its kind, Offworld gives the player more direct control over resources, which can also affect your neighbors in a number of interesting ways. For example, decide to sell large amounts of your Silicon and the price for it will be driven down. Bad news for your neighbors if it’s their main money maker. Similarly, buying large amounts of any resource drives the price up. This simple back-and-forth allows you to make to make cunning and malicious plans, with help from The Black Market. 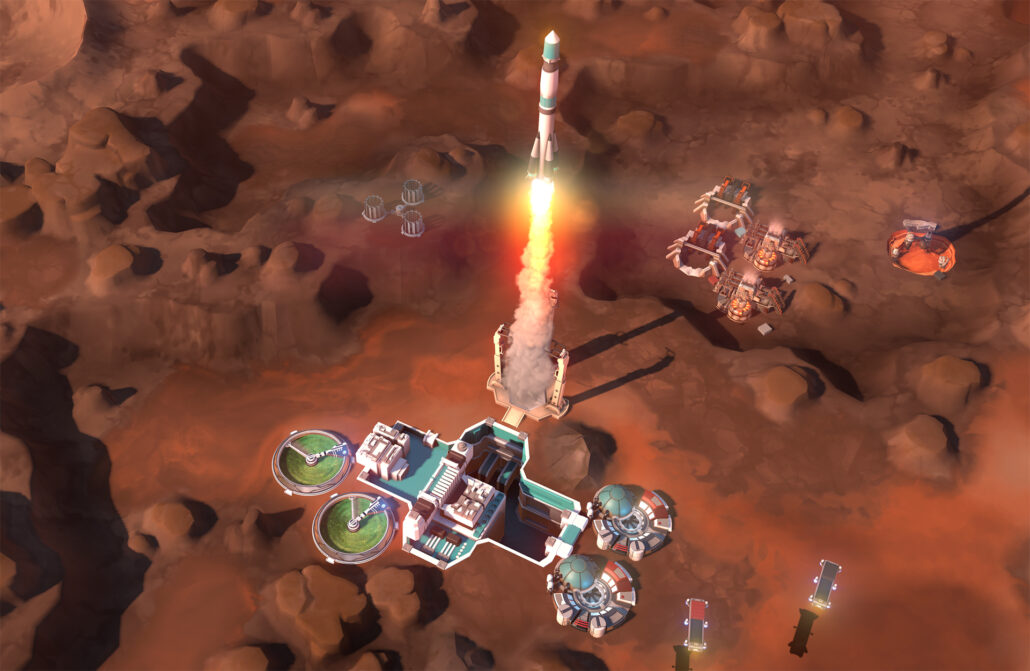 The Black Market in space is a bit weird – for one, every time you buy something you need to wait just under a minute to be able to work with them again. Also, they don’t sell anything interesting like drugs or guns, instead they seem to specialize in pseudo-militaristic espionage, with tools such as EMPs and “Mutinies” available to purchase. Using these, you can disable large sections of a neighbor’s base, driving up prices of resources they cannot attain by themselves, and, as you might’ve guessed by now, go to war.

This is where Offworld Trading Company breaks down for me. Long, drawn-out battles in Civilization V are a treat to me, a vast game of chess played over a huge game board lasting for hours at a time. Offworld very clearly takes heavy inspiration from games like Civilization, and the attempt of turning that style of game into a space-based RTS where you overwhelm enemies with your wits is indeed a clever one – shame it’s not one I can particularly enjoy.

I’ve already mentioned the resource system, and I have to say I adore it. The ability to change the market trends and capitalize on shortages of particular resources to make money is genius, and few other games give you this hands-on control. Building up your base and creating buildings to craft and source more resources is a straightforward exercise. The early minutes of the game are immediately rewarding – and then the neighbors get involved.

As I’ve mentioned, you’re not alone on this new planet, and that’s going to be the source of some frustration. Offworld isn’t a world-building strategy game like Civilization, Offworld is an RTS where you outplay other players – AI or CPU – by using underhanded tactics. Essentially, you should be running the best business. You have no surplus of unnecessary materials, you are in profit, you are creating high-value resources and you are able to upgrade your home base. So once you’re financially secure, it’s time to take down everyone else. 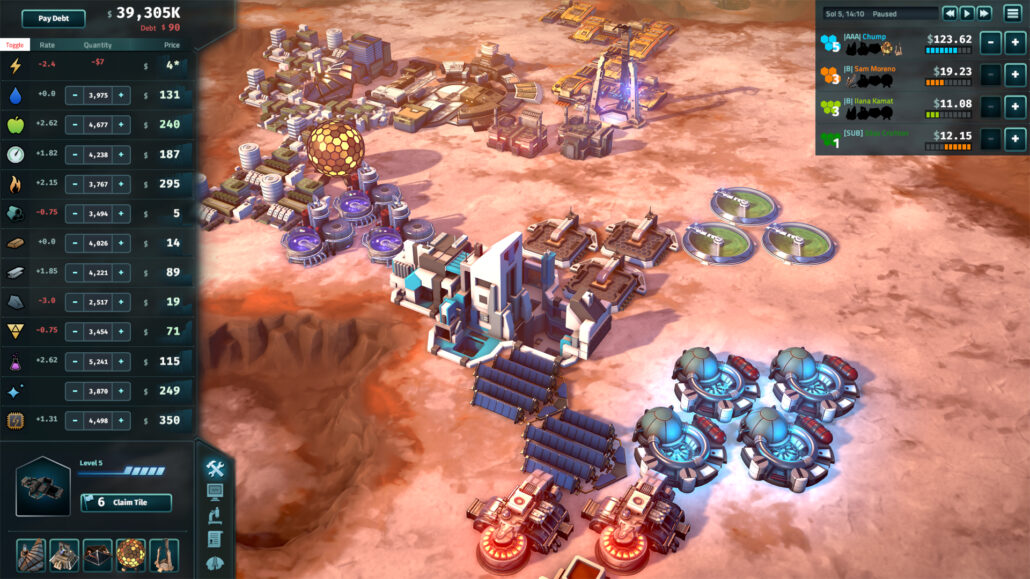 EMPs are a good bet – use the large area-of-effect it has to shut down multiple buildings, potentially getting your opponents into hot water without their necessary resources. Mutinies are more directly effective, making the employees present at any one building go AWOL and potentially even begin sending the resources they’re creating to you instead. The Black Market offers a range of services that revolve around ruining other people’s lives, so get used to it.

Unfortunately, Offworld makes it clear very early on that this is a game about going to war with the others on the planet. When you first begin the game, you are required to win a single Skirmish game before starting the campaign. This. Is. Awful. It pains me that I’ve referred back to my experience with the Civilization series multiple times, but each time I find a frustration with Offworld I can’t help but remember how it’s already been done elsewhere and better. In Civilization, a standard campaign ends when you achieve one of a myriad of win conditions, whereas in Offworld you can’t even play a campaign without already having waged and won a war. It forces me into a style of play that I don’t necessarily play these type of strategy games for, and if I wanted an RTS where fighting was a focus I’d probably have picked up Starcraft II or perhaps even a MOBA by now. As a result, Offworld feels like it doesn’t know where the focus is – is this a game about Cold War-style espionage, or gathering resources and managing a business in space? As it turns out, it’s both, but it doesn’t do either particularly well.

I struggle to recommend Offworld, because everything it does has been, and will continue to be done better elsewhere. Unfortunately, I can’t even recommend it over Sid Meier’s maligned Civilization: Beyond Earth, his own space-age adventure – as disappointing as many players found it to be, it’s still sharper and more polished than Offworld.

Offworld Trading Company is by no means a bad game, it’s just difficult to recommend against the existing titans of the genres it borrows from. Still, if you really like the premise you could pick it up during a sale.