If the name Oceanhorn: Monster of Uncharted Seas sounds familiar, chances are you might have heard of this Zelda-like back in 2013. Originally an iOS exclusive, this mobile experience had made the transition onto PC in 2015 and now graces the likes of Xbox One and Playstation 4. In a world where players are still awaiting the release of a new console Zelda since Skyward Sword, how does Oceanhorn hold up after three years?

To call Oceanhorn a playful tribute to The Legend of Zelda series would be putting it lightly. It’s undoubtedly the closest players can get on a non-NIntendo platform without getting a slap on the wrist from Nintendo’s lawyers. From bombs, arrows, magical spells, and even a health meter comprised of hearts, the only thing Oceanhorn is missing is a green tunic for the hero to don. Along the world map, players travel from one island to the next via boat that calls back to a certain game featuring The King of Red Lions.

Oceanhorn is filled with enough secrets that can make any Zelda veteran giddy with excitement. Heart pieces and special collectible bloodstones are scattered across the ocean’s numerous islands and have some creative solutions to gather them all beyond just bombing every wall in sight. Each island has a number of collectibles that all have uses to improve the hero’s arsenal in one way or another and frequent return trips will be necessary as new tools are acquired. Only forty of the bloodstones are required to earn Oceanhorn’s most powerful spell, although there is a special achievement for collecting all fifty-five of the gems.

While Oceanhorn: Monster of Uncharted Seas is no graphical powerhouse, there’s a certain charm to the game’s simpler 3D graphics. Some of the rough character animations, faces in particular, are much more prominent on the big screen and can be a bit awkward. The various islands to explore each have their own unique style to them and the bright color designs help to highlight Oceanhorn’s whimsical nature when needed and dark, drab environments when the story shifts to a more serious tone. Oceanhorn also showcases an original score by Nobuo Uematsu (Final Fantasy series) and Kenji Ito (Mana and SaGa series) that helps set the seafaring mood. 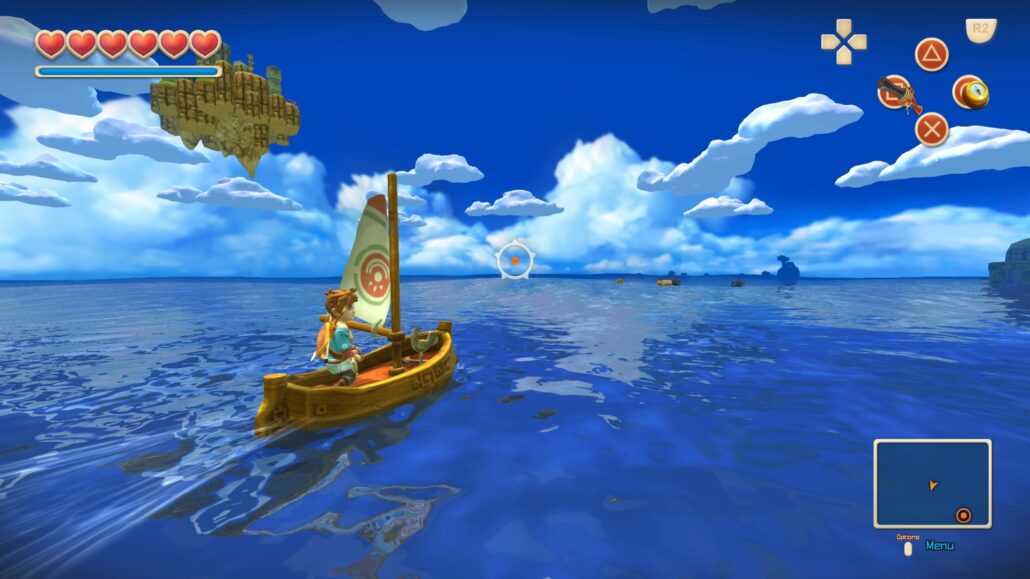 In development, making the transition from mobile onto consoles can often be a difficult endeavor when it comes to the controller. Swapping from liberal motion control to the use of a proper gamepad can often leave a game feeling somewhat loose in nature. Oceanhorn makes a decent attempt to fix those issues with the generous use of aim assisting for some of the game’s more common tasks. Actions such as light platforming segments or using bombs and arrows to solve puzzles are fairly automated with the game being generous with aiming towards the right target. Blocking enemy projectiles to hurl them back at the foe (a common tactic from battling Deku Shrubs in Zelda’s Ocarina of Time) doesn’t quite use the aiming properly and it was awkward to line up a return volley most of the time.

If there was one single thing to change about the complete Oceanhorn experience, it would be to take out the fishing minigame. Developed for a mobile platform where swiping can be the most common motion, transitioning that to the analog sticks is an experience that simply wasn’t fun to play. Each fishing attempt is a tug of war that consists solely of tilting the sticks against the fish’s choice of direction as its stamina drains until it’s caught. These fishing battles are simply not enjoyable when fighting against a fish that decides it wants to change direction every few seconds and makes it a hassle to drain any amount of stamina before the fish starts recovering. The final fish one can capture is electric in nature and constantly drains the player’s health. If you’re unlucky enough to try to reel in a feisty fish that won’t keep to one direction, more often than not you’ll lose all heart before the fish gives up.

The team at Cornfox & Bros have put together a piece that fits comfortably into that Zelda mold and doesn't do too much to innovate itself from its inspiration. If you're looking for a comfortable experience that can bring back childhood memories of playing Zelda, Oceanhorn: Monster of Uncharted Seas fits quite neatly into that role and won't take more than a few afternoons to finish.

As a homage to the likes of A Link to the Past and The Wind Waker, Oceanhorn is a brief comfortable experience that can now be enjoyed on the big screen.