Nights of Azure was the first game developed by Gust where the developer of the Atelier series tried branching out with a different setting and a story that promised to be extremely touching. The game didn't deliver in full, despite good character development and interaction and some interesting ideas, and it was up to the sequel to make Nights of Azure a franchise that could stand up to other established JRPG series. Sadly. Nights of Azure 2 doesn't improve much what was wrong with the original game, taking a few step backs in the process which make the experience slightly worse.

Nights of Azure 2's premise is very similar to its predecessor's. Following Arnice and Lilysse's adventure from the original game, the world is still in danger due to the Moon Queen, an extremely powerful being who aims to bring yet another endless night to the world. To prevent this from happening, the Curia's' Holy Knight Aluche will have to defend her childhood friend Liliana, also known as the Bride of Time, and bring her to the Moon Queen so that she may sacrifice herself to banish the fiend from the world forever. During the journey, however, Aluche is killed by the Moon Queen herself and later revived using very special Blood, the blood of Arnice, which grants her extraordinary powers. With them, Aluche has to find Lylisse again and defeat the Moon Queen.

While the overall premise is pretty similar, Nights of Azure 2's story is not as good as the one of the original game. Character interaction, for starters, is not on the same level: Liliana is absent for a good portion of the story, and her relationship with Aluche is not well developed. Other main characters aren't sufficiently developed as well during the course of the main story, forcing players to complete sidequests to learn more about them and their involvement in the plot. The fact that only a few of them matter in the grand scheme of things also doesn't help. The most baffling thing about the matter is that there was plenty of time to develop these characters during the course of the game, but fanservice took precedence, with numerous jokes about outfits, eating and so on. Aluche and Ruenheid's relationship, where the latter falls in love with the now half-demon, could have created a very interesting dynamic between the two and Liliana main, but it's just yet another reason to throw in some more fanservice. A shame, considering the lore upon which the story is based is quite interesting.

The gameplay structure hasn't changed much in this sequel, not counting a few new features that make it feel closer to other Gust games. Once again, players will have to traverse a variety of fields and dungeons battling enemies in real time, remove obstacles using special abilities and so on. The battle system is quite reminiscent of its predecessor's, with Aluche having a few different weapons with specific combo strings at her disposal as well as block, jumping, and evasive maneuvers. Controls and movement are responsive enough, and there's plenty of new options to make battles feel fun, such as special combination attacks with Lilies, the human companion that can be brought into battle, called Lyli Burst and abilities which grant a variety of boosts and special effects, such as a temporary defense increase and so on. Servans from the first game also make a comeback, but they have been changed considerably and the system definitely feels limited. In Nights of Azure 2, Servans are either of the Striker type, which allows them to be transformed into weapons, or of the Tricker Type, which allows them to unleash a special magic attack. While the new Servan system gives additional battle options, it provides less control over the creature than before, so some players will definitely be disappointed.

Even with all these new options, it sadly doesn't take too long for battles to become repetitive. Even at the highest difficulty level, regular enemies don't pose much of a threat. Bosses are tougher and require a bit more focus, but Lily Bursts make even these battles almost trivial due to how powerful they are. The low challenge level ends up making many of the game's other features, such as the sub-quest system, somewhat pointless. Why go back to previously visited areas and clear tedious tasks to level up characters when you can just brute force your way through battles? The fact that dungeons are a series of corridors with little to no variation doesn't help.

While not in battle, players will spend some time in the game's main hub, which works in the same way it did in the original game, sporting several facilities such as an item shop and more, and in the aforementioned dungeons. Like in the Atelier series, Nights of Azure 2 comes with a time limit which should force players to pick their activities carefully. I did not have any trouble in this regard, so there's plenty of room to undertake side-activities.

Even character design seems to have taken a step back in Nights of Azure 2, compared to its predecessor. This is mostly due to personal preference, but I found Arnice and Lylisse better designed that Aluche, Liliana, and Rue. For the rest of the presentation, Nights of Azure 2 is not the best looking game of the year, but it looks decent enough, not counting the cutscenes, which run at a lower than 1080p resolution and 30 FPS, and some occasional glitches. Additionally, the PC port is quite lacking in regards to graphics options, allowing players to just change resolution and enable depth of field. Performance is stable, maintaining 60 FPS during the most hectic of battles, but in this day and age, it's not acceptable to not be able to tweak the experience further.

Despite all of its issues, Nights of Azure 2 can still be an enjoyable experience, depending on how much tolerance the player has for tropes, fanservice and an experience that eventually become repetitive. The setting is as interesting as before and battles can be fun for a while, but if you're looking for a deep, meaningful JRPG, you better start looking elsewhere.

PC version tested (review code provided by the publisher). You can buy the game for PlayStation 4 or Nintendo Switch via Amazon. 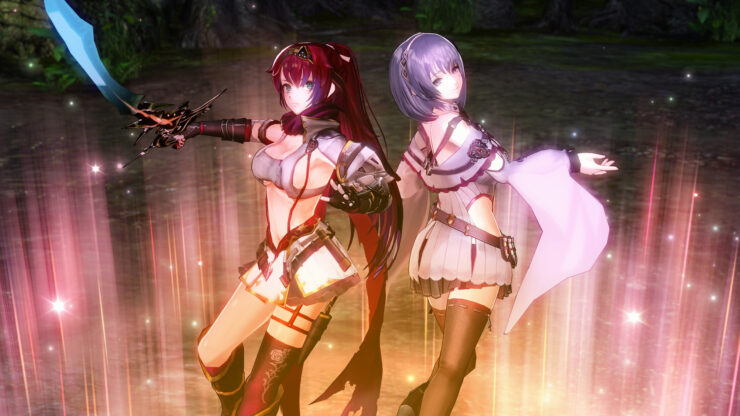 Nights of Azure 2 had the potential of being much better than the original game, but it fails to build upon some of its best features, such as the character development and interaction. The experience offered is thus slightly worse. The game can still be enjoyable with its fast-paced battle system, humorous interactions, and plenty of fanservice, but the low challenge level, bad dungeon design, and underwhelming story make it difficult to stay engaged for a long time. A missed opportunity.