Gust has managed, over the course of the years, to establish itself as one of the most consistent JRPG developers, bringing their Atelier series to some very good heights. Last year, Gust branched out from its cutesy landmark series with Nights of Azure, an action role-playing game that distances itself from the Atelier series with a darker premise and atmosphere. With a second entry in the series currently in the works, Nights of Azure has finally reached PC, with all its unique features and flaws that ultimately damage the experience and prevent it from reaching its full potential.

Nights of Azure is set years after the defeat of the Nightlord, a demon that wanted to shroud the world in an eternal night. Upon its death, however, the Nightlord managed to touch the word deeply through its blue blood which showered the world and brought forth evil creatures that plague the entire land. The only shield protecting humanity is the Curia, which sends forth its knights to banish these creatures. One of these knights is the powerful half human, half demon Arnice, who is sent on Ruswall Island on a mission. Assisting Arnice is her close friend Lilysse, who will end up being pivotal in the battle against the Nightlord's spawns.

Nights of Azure's premise is quite interesting, and the story is made enjoyable by the development of Arnice and Lilysse's relationship, which eventually surpasses the bonds of friendship to become something more. This development makes a twist happening later in the story even more heartbreaking, a twist that actually challenges players' morals in a deep and meaningful way. Sadly, these excellent moments are made somewhat less by the development of the story itself, which is filled with excessive comedy relief that takes something away from the darker atmosphere of the game. This approach works in the Atelier series, but definitely not in Nights of Azure. It's a shame because the setting is really interesting and the relationship between the two main characters very well developed.

Sadly, the story isn't the only area where Nights of Azure disappoints, as the experience becomes repetitive very quickly. The game is an action role-playing game with dungeon crawling elements, with players controlling Arnice and exploring a variety of dungeons filled with enemies, traps, and treasures. Arnice controls very smoothly, with players being able to perform quick and heavy attacks, special attacks which require SP, dodge, and guard. Making combat deeper are Selvans, familiar-like creatures that can be summoned on the battlefield. Selvans fight independently most of the time, but players can issue some generic commands and make them perform their special skills called Selvan Burst. Additional Selvans are unlocked by obtaining special items and performing a ritual at the main hub, so players often have the chance to update their battle roster and experiment with them. Sadly, there's very little reason to do so, as the general difficulty level is too low and there's no incentive in utilizing all of the game's sub-systems fully. Arnice's attacks don't change that much during the course of the game either, and even her ability to transform into different demons, depending on the active Selvans, is nothing more than a way to make combat less stale, something that happens way too soon.

Combat isn't the only thing that quickly gets stale in Nights of Azure, as the whole flow of the game gets repetitive very soon, with little variation. Dungeons, even with their different gimmicks, all feel samey and slightly empty, and not even the exploration time limit makes them challenging. Subquests, which can be undertaken at the Ende Hotel, the game's main hub, are just as repetitive, with many of them being simple fetch quests that reward players with yet another comic relief scene or some underwhelming rewards. Some do provide some character development, but after so many fetch quests, it's very tempting to just skip most of them to move the story forward. Even daytime activities aren't as interesting as they could have been, as players are presented with text explaining what Arnice did between one hunt and the other.

One area where the game doesn't disappoint is character and world design, which are both extremely detailed and help paint the picture of a world that tries to survive the demons of the night. At the same time, sadly, it's also a reminder of the wasted potential of the premise and setting. The PC version of the game, unfortunately, doesn't look much better than last year's PS4 release, with a very limited number of graphics options: resolution, anti-aliasing, and depth of field. Performance is also unstable during cutscenes, but thankfully everything moves smoothly during battles. The fact that the PC port hasn't received enough care is highlighted by the fact that there's no quit game option, something that is, frankly, baffling in this day and age. Like in the PS4 version, the soundtrack is more than passable, but the lack of an English dub may be an issue for some players.

Nights of Azure is, at the end of the day, a collection of missed opportunities. The game has a lot of potential, but fails to realize it due to repetitive combat and game flow, and the excessive use of comic relief which ruins the game's darker premise. Arnice and Lilysse's relationship and the very good character and world design are the true saving graces of an action role-playing game that could have been so much more. 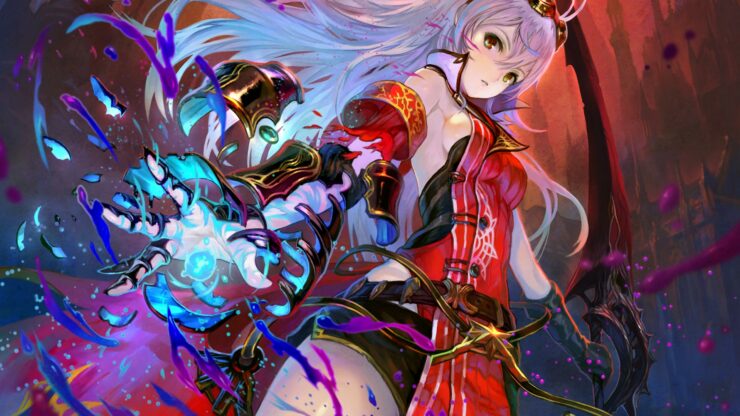 Nights of Azure is a game of wasted potential. The game's dark tone and setting is ultimately ruined by the excessive presence of comic relief, which takes a lot of the tension out of the terrible choice Arnice has to take to save the world. With an experience that gets stale way too quickly, Nights of Azure true saving grace are the game's two main characters and the development of their relationship, which takes some interesting turns. A shame, as the game could have been so much more.