Moto Racer 4 fits a category of games that I like to call ‘filler PlayStation Plus games’. You know what I’m talking about, the random titles in the Instant Game Collection that you’ve never heard of and almost certainly don't want to play. Unfortunately, this game is not featured on PlayStation Plus, and even if it was technically free I still wouldn't recommend spending time playing it. Unlike the previous games in the series (created by Delphine Software International), Moto Racer 4 has been developed by Artefacts Studios, the team behind Moto Racer DS.

Most of the promotional material for Moto Racer 4 is accurate to how the game actually plays. You can drive at high-speed on a motorcycle and occasionally you are able to do tricks for some style points. Featuring fourteen different tracks to race on as well as a Progression mode that allows you to unlock content, there’s a decent amount in the game to keep you occupied if you choose to spend your time with it.

The Progression mode is likely the only mode you will ever play in Moto Racer 4, and if you aren’t amazing at racing games then you’ll be playing it for quite a long time. Progression mode features ten blocks of missions, each one ending in a Championship that spans three to five races. Remember, there are only fourteen tracks in the game, so you’d better get used to playing all of them because you’ll be racing on them frequently. The missions in the game come in a few varieties: Last Man Standing, the last person at set intervals is eliminated; Survival, drive through checkpoints to lengthen your time on the track; King of the Road, stay in first for as long as you can to win the race… you get the idea. Stay in first and win the race. There is one challenge that is genuinely cool and that is Slalom. In the Slalom challenges, players have to pass the cars in a certain direction in order to race for a certain amount of time. It would have been nice to play other unique challenges like this as opposed to the ‘come in first or lose’ missions. The Slalom challenges were definitely not perfect, but they brought something slightly different to the table and were easily the highlights of the Progression mode. 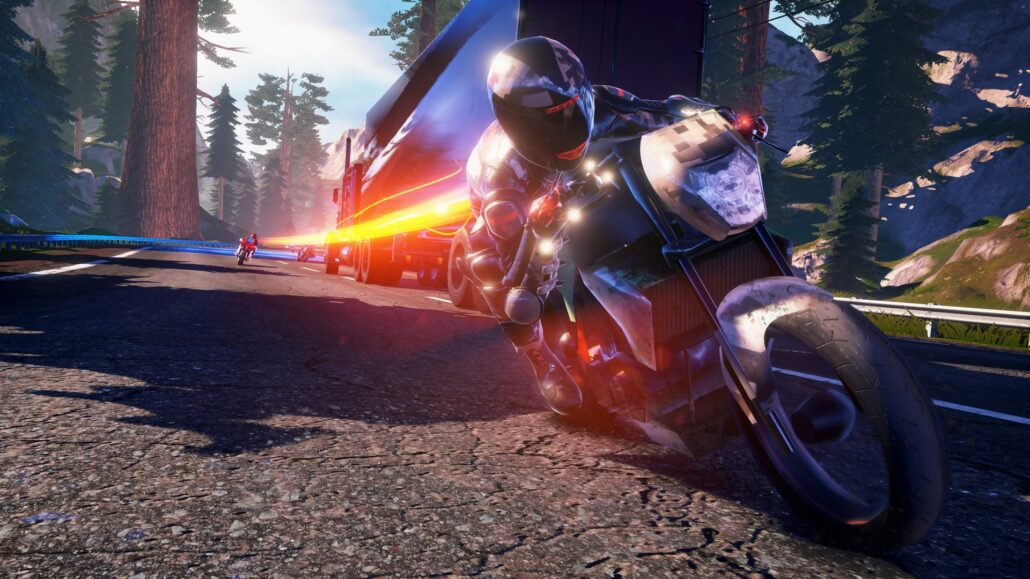 For a game that focuses on racing, you’d think the developers would try to make it fun. During the dirt bike races, players can perform tricks in the air in order to gain a sweet boost for about a second or so. I mean, it’s alright but it just feels a bit boring. Whether you do a simple trick of holding up your hands for a few seconds or doing a super-man backflip, ultimately you still receive the same amount of boost despite the larger risk. If there is a chance that I am wrong about the boost reward you get, then that in itself is a problem. You never feel like you are going at insane speeds because you are practically at the same speed throughout the entire race. You can eventually gain the ability to perform turbo boosts from wheelies, but that only adds to the monotonous task of racing. If the racing was fun then maybe the game would’ve been redeemable for the local multiplayer (if you can get it to work), but even then I couldn’t recommend it, especially not at the launch price of £22.

One thing that is incredibly annoying in games is when you lose a mission and the first thing you want to do is retry immediately. Moto Racer 4 is the type of game that, if anything, it wants you to boil with anger after spending ages racing just so you can see a breakdown of your style points. I’m not sure why anyone would want to do this, but Artefacts Studios makes you wait at least fifteen seconds before retrying the same race again. Speaking of annoying, how would you like to predict where you might end up in a race before actually trying it? Moto Racer 4 features a system I’ve never seen before in a racing game, where you guess where you might end up in a race in order to earn stars (you can earn up to three stars per challenge). Just finished first in a Championship containing five tracks but you only thought you’d finish in third place? Great! You’ve earned one star when you really should’ve earned three stars. I can somewhat understand this system if it increased the difficulty depending on what you picked, but I could barely tell the difference between the AI on the hardest difficulty versus the easiest difficulty.

Oh, and the difficulty in Moto Racer 4 is silly too. You start off with your basic character and asphalt/dirt bikes, both of which haven’t been upgraded. As you begin the game, you may feel inclined to go for the most difficult challenges that earn you three stars. If you fancy yourself to be halfway decent at racing games, I can imagine this would be a normal thing for veterans to do. Moto Racer 4 decides to knock all you veterans down a peg by handicapping you initially. Players will have to progress through the game in order to truly compete in the three-star challenges, essentially forcing you to backtrack after you’ve scraped by in the easiest missions available. In order to make your way through the Progression mode, you’ll have to unlock each of the characters. Those characters are locked behind the Championship missions where you will have to earn three stars, and the only way you can reliably earn three stars is to have your fully upgraded biker as well as all of the available abilities. That might not sound too bad, but when you factor in starting with three individual bikers, each with two bikes that all need to be upgraded, it can end up being a huge time sink for no real reason.

To continue with this rant, the music in the game is hot trash. One of the songs sounds like a metal guitarist who has just learned to do pinch harmonics, only to celebrate by releasing a song that pretty much only contains pinch harmonics. It’s a bit like someone left the radio station on where the hosts decided to play the worst songs available, you’ll probably want to turn off the music as soon as you start the game. 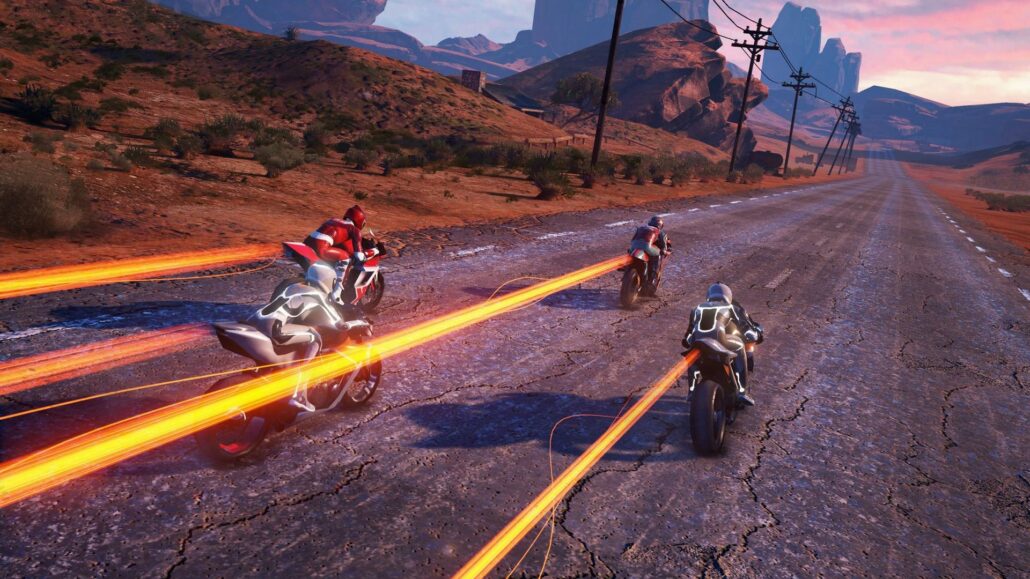 You’ll need a powerful PC to run Moto Racer 4 as the game runs on Unreal Engine 4. The game has also been released for PlayStation 4 and Xbox One, so if you haven’t got a high spec PC I wouldn’t recommend picking up this version. My machine has a GTX 1080 GPU and an i7 6700K CPU, despite this I still ran into a few stuttering problems that ending up ruining some of the longer Championships. There were plenty of glitches and bugs that also threatened to ruin my progress, mainly collision detection issues with ramps.

There is a big chance players won’t enjoy the Progression mode and those people have the option of playing against the AI in the Quick Race mode. I tried to play online several times but, after waiting several minutes, I could not find anyone to play with. To top it off, when I tried to play the versus mode locally, it would not work on my Steam Link set-up at all. Both players either controlled the same biker, or the second controller would not respond at all. Other players may experience something different, but I seemed to have problems that could not be fixed (I don't have any issues in other games).

Players can customize their Power Ranger bikers (and their bikes) in a range of different colors. You can totally reflect your unique style by performing handstands on your handlebars while sporting a sweet neon-coloured get-up. Why look like a generic biker from Road Rash when you could look like a biker who also moonlights as a clown?

Reviewed on PC (code provided by the publisher). Also available on PlayStation 4 and Xbox One.

Moto Racer 4 is not a great game, and even at the budget price of £22 it is still not worth buying. If you have your heart set on a motorbike game for whatever reason, surely you can find something better than this. Despite some of the bugs, Moto Racer 4 is a competent game that just manages to be a disappointment, even when compared to mobile games. I’ve never been bored while playing a game involving high-speed motorcycles and bikers doing radical stunts, but I suppose there’s a first time for everything. Fans of the original games should steer clear of this game, as it will only disappoint you.