MeiQ: Labyrinth of Death might not be as cool sounding as its Japanese counterpart (A Maze to Eradicate Them All) but it certainly drives the point across. This second game to come from the newly established team of ex-Disgaea veterans at Makai Ichiban Kan, the first being Trillion: God of Destruction, also for Playstation Vita.

For those that have played similar titles across the Vita such as Operation Abyss or the Nintendo-exclusive Etrian Odyssey series, MeiQ fits into that neat little genre of dungeon crawling RPG’s. With no proper world map to explore, the exploration phase is segmented across a hub city that offers the world’s sole shop and place to save as well as a growing list of dungeons that expands with each chapter of play.

The five elements of Wu Xing play a huge part in the effectiveness of MeiQ’s heroines and guardians. Split up across Metal, Wood, Earth, Water and Fire, each mage’s elemental affinity is directly tied to the form (ie: costume) they wear into battle and the guardian they’re affiliated with. MeiQ’s heroine Estra is the only party member capable of swapping their outfit for a different element; every other girl is locked to their respective element.
Once inside each dungeon, the view shifts to a first person view in the same vein of Etrian Odyssey. As players navigate each labyrinthine maze, a map is automatically constructed and fast travel posts are unlocked across nearly every floor. These maps can be larger than any other title I’ve played, but bigger is not always necessarily better. Trying to fill out a map to 100% completion is a fixation of mine and walking about to map every individual space can be a time consuming chore. Couple this with having to grind out levels to be effective on the harder difficulties (this can be sped up by equipping a guardian with a stone that boosts encounter rates to an insanely high amount) and traveling even a single floor might take the better part of half an hour to fully explore.

Some may view having larger maps as a positive for a dungeon crawler, and typically I would agree with that point. However, when so many of the maps feature uninteresting designs and few traps or gimmicks to alleviate the monotony (and don’t get me started on one-way doors), this is something where showing some restraint in the size of dungeons could’ve worked in MeiQ’s favor. MeiQ’s third dungeon is especially bad with a giant first floor that thankfully becomes much more compact and straightforward the deeper the player explores. 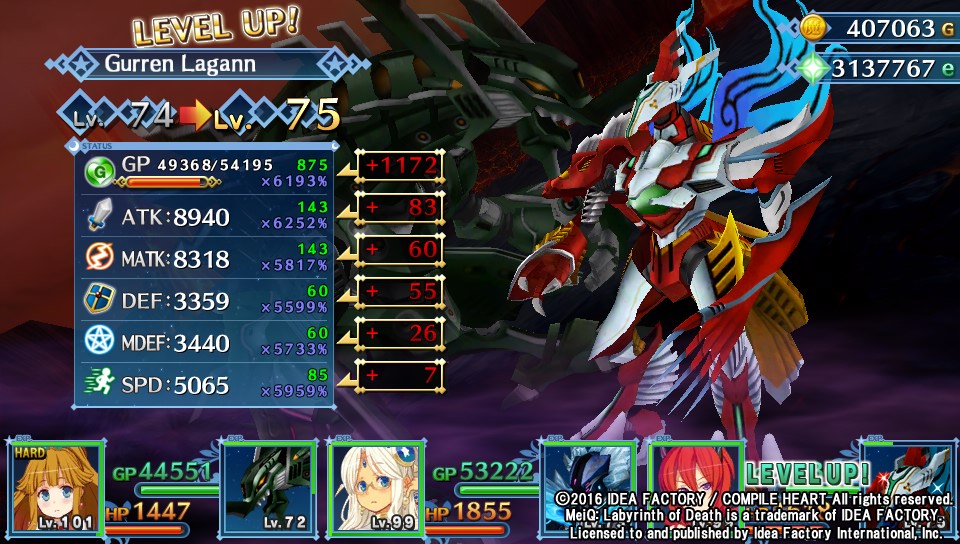 As party members grind away and level up their respective form (this attribute is tied to battles fought rather than experience gained), their elemental affinity grows. Equippable magical stones known as seeds are the only form of equipment for Estra’s crew and can augment their affinities in substantial ways. As characters grow in strength, those affinities directly affect their guardian teammate with how stats are allocated. A guardian’s basic stats are taken entirely from the equipment they wear. After that, these stats are boosted with a percentage increase based upon the guardian’s level and mage’s elemental affinity. Sure, that Wood guardian you’re using might only have 165 base attack, but when he’s rocking a multiplier of 4,000%, that’s at least 6,600 raw attack power. Higher levels see a much bigger percentage boost and it’s essential for tackling the game on its more challenging difficulties.

With any rudimentary amount of grinding, the normal difficulty to MeiQ is almost a laughable joke. Strategy can be disregarded and all three party members can be set to auto battle if any time is spent leveling up Estra and her crew. This became quite apparent when I sought to challenge the Hard mode early on and got wrecked by the very first boss. After a little while of slowly grinding away at some of the fodder enemies and taking the difficulty back down to Normal, that very same boss became a joke. In fact, once I had those extra levels under my belt, much of the challenge was far removed and I continued to breeze through the experience, swapping between Normal and Hard modes whenever I was aching for a slightly more promising challenge. 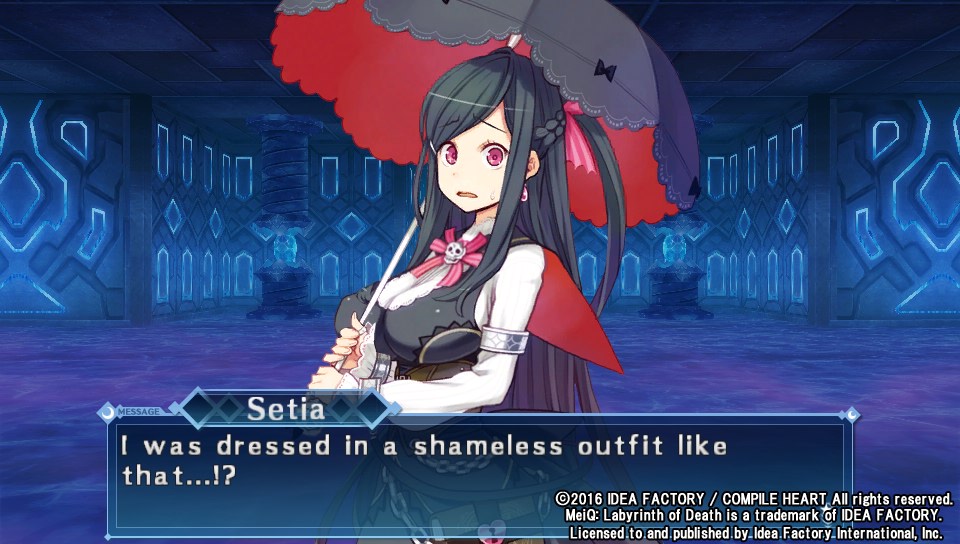 MeiQ does offer a bit of freedom in terms of party creation if the player ever hits a challenging spot during the later stages. A party of three characters can be brought into battle, forcing players to choose which of the five elemental heroines to bring along (Estra filling whichever role one desires) and which of the ten guardians to bring along. Naturally, these options won’t be all available to the player at once. It takes a few hours before a second teammate even joins Estra’s party.

MeiQ: Labyrinth of Death may have been refused certification in the Australian markets, leading to some speculation on just how adult-themed this dungeon crawler might have been. Apart from dialogue that frequently toes the line of being lascivious in nature, there’s nothing outright perverse that’s any worse than the other titles that grace the Vita’s open platform. The costumes, however, are somewhat scandalous and serve little function as proper battle attire. Perhaps it’s a sign that I’ve covered too many of these role playing games that racy costume designs don’t impress me one way or another.
Fan service isn’t enough to save a game from sliding into mediocrity these days. If titillating dialogue and revealing costumes are all one’s looking for in a game, players can do far worse than MeiQ. While there are moments in the exploration that shine and strike that perfect balance of difficulty, there are many more times where struggling to make it past the boring stretches takes away from the enjoyment.

MeiQ hits all of the right marks of a dungeon crawling RPG but fails to capture that sense of challenge, instead opting for light fan service as a substitute.