A lot of things can happen in the game industry in the space of a year now. It wasn’t that long ago we were lamenting the death of the Marvel vs. Capcom series entirely, convinced that Disney’s acquisition of Marvel had put a stake in the heart of one of the fastest fighters there was - and then, suddenly, like a beam of light from the heavens, Capcom confirmed Marvel vs. Capcom Infinite. Everything since has been a bit chaotic, mind - the series has its dedicated fanbase, but even some of them were wary when they saw Infinite for the first time. But now the full game is finally in our hands, and we have one question to answer: is Marvel vs. Capcom: Infinite the crossover comeback we all wanted?

Well, let’s address the immediate disappointments first, like the lack of X-Men. Yes, it seems the folks at Disney aren’t willing to give any promotion whatsoever to characters it can’t place in its own cinematic universe, as such X-Men, Deadpool and the Fantastic 4 are long gone - but in their place are a handful of brand new characters; Captain Marvel, Ultron, Gamora, Black Panther, Jedah Dohma, Sigma and Mega Man X. No, none of them are quite the replacement for series staple Wolverine, but even without Logan it’s easy to find a pair of characters for your tag team that you’ll love. 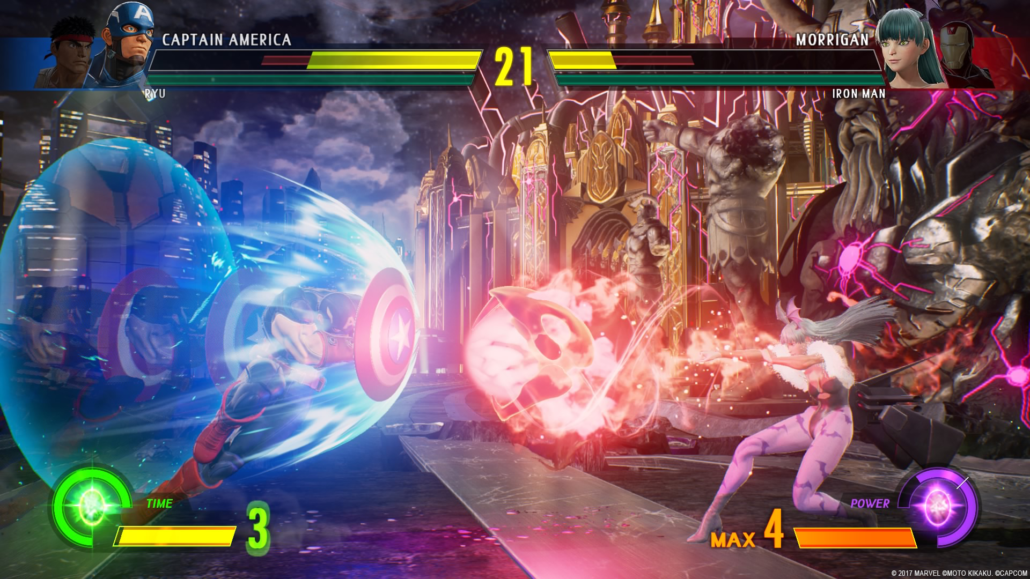 Luckily even if you’re not sure on your duo, you can swap between characters and learn them easy thanks to the Magic Combo - that’s a four button combo that works with every character; Light Punch, Light Kick, Heavy Punch, Heavy Kick. In that order, you’re guaranteed to always combo your opponent, making it easy to pick up any character, but difficult to learn their eccentricities. For less skilled players there is an auto-combo option - a combo performed by mashing Light Punch, that will always launch and combo the opponent but won’t impart much damage. This can be disabled in settings - along with an auto-jump that follows your launches - for players who like to do things manually.

Unlike Marvel vs. Capcom 3, you won’t find as many infinite combos (despite the name of the game) and easy to-deaths either. Instead, combos have been dialled back slightly - there are, of course, team-specific and character-specific combos that can be enhanced even further with the Infinity Stones, and some of those combos really can feel infinite when you’re stuck on the receiving end, but the game has been rebalanced slightly so players won’t find their character dead as soon as the round has begun. 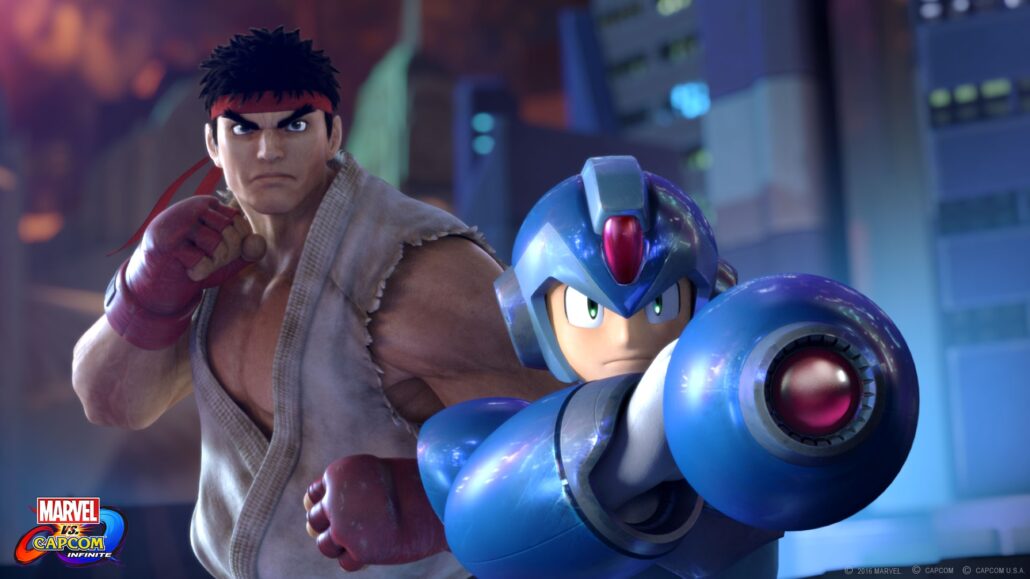 Infinity Stones are a good addition to Marvel vs. Capcom Infinite, introducing six unique stones that each give two abilities top the player, the Infinity Surge and the Infinity Storm. Infinity Surge is usually a small attack - projectile, long-range health leech, command grab, or even a set dash that moves through projectiles. These abilities can really help make up for some weaker characters - the Time Stone, which is the one which bestows a dash - can make slower, less agile characters much more viable. Infinity Storm, on the other hand, acts as a big activation that comes with a special ability - the Soul Stone can even revive your fallen partner, while the Reality Stone adds massive elemental attacks to each of your moves. All of these can get you out of a nasty pinch against your opponent.

It’s a shame that hits tend to feel light, though. This isn’t exactly unusual for the Marvel vs. Capcom series, but after playing Street Fighter V, Tekken 7 and other fighters, it took me aback how little impact it felt like hits had, possibly due to the sound design. This is made up for, mind you - Marvel is a fast paced game, and the light impacts of the hits aren’t really a concern when you’re stringing together long combos, active switching to your partner and comboing supers into the mix. 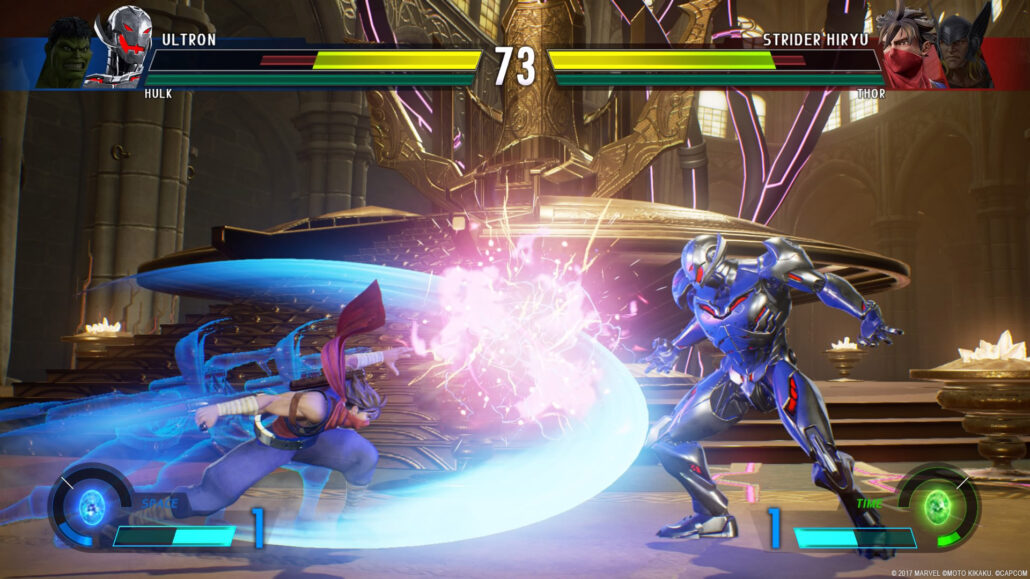 The sound design on hits is obviously an aesthetic choice that won’t bother everyone, just like the art style. I’m definitely not offended by Infinite’s art style in any way, but it has certainly lost some charm since the days of Marvel vs. Capcom 3. The unique cartoon/comic book style with bright colors feels really toned down and muted in this game, with slightly more realistic proportions and colors making it all look a bit more… Bland. The character models which fans were unhappy with were changed, at least - Chun Li and Dante both look fine, despite their earlier appearances being… Suspect.

Marvel vs. Capcom Infinite isn’t too shabby when it comes to the amount of content it offers either; Arcade mode is here, as is a new cinematic story which is a bit of a letdown. The cutscenes are nice, as are some of the character interactions, highlighting some key philosophical (and just plain entertaining) differences between the cast - but the fights in the story mode are the definition of boring. Too many repeated fights against nameless Ultron drones, and not enough Galactus-style set pieces. It’s not terrible, but it’s still far behind the quality you see from the likes of Injustice 2. 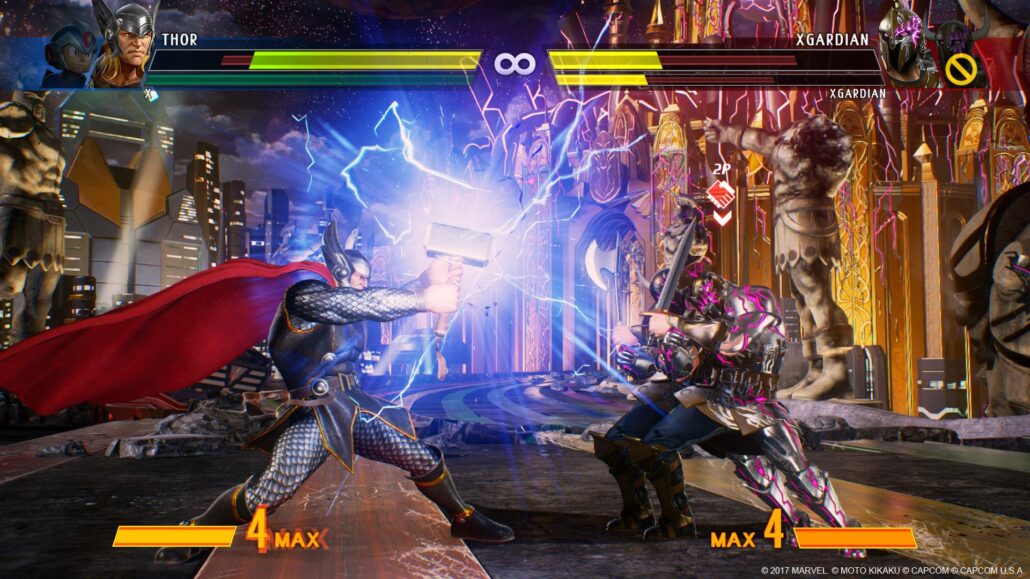 Once you’ve finished off Story mode, most of your time with Marvel vs. Capcom Infinite will likely be spent mopping up the challenges in Mission mode - mostly character-specific combos to help familiarise you with some more high-level play - or playing in either Training or Arcade mode while waiting to match up against people online. The netcode is really good, on that note - I had only a few examples of mild slowdown, and these were most definitely with players outside of my own region.

Marvel vs. Capcom Infinite is a hard one to pin down. In a lot of ways, it’s the return of the Marvel franchise we all know and love, but on the other hand, it feels like too much has been stripped away. The art style, combo potential, and even character roster all feel as if they’ve had elements stripped away, perhaps in the attempt to make it fit more in with mainstream fighting games as they attempt to become the next big FGC hit. It feels almost as if it’s heading slowly towards this homogeneous fighting game archetype, instead of being its own unique beast - which Ultimate Marvel vs. Capcom 3 most certainly is.

Even with all my complaints, I couldn’t help but enjoy my time with Marvel vs. Capcom Infinite. I really, really enjoy playing the game and playing with the variety of characters - it’s just a shame that when combining two amazing universes such as Capcom and Marvel so much feels restrained or held back. Infinite might be the next big esports fighter, but this feels like a rough launch.