We've all seen the story of a person leaving the bunker, hundreds of years after the nuclear weapons have landed, laying the world to waste. That story is well covered, even showing you what bunkers were like when the vaults were designed to act as one giant social experiment. What if you ran the bunker with the sole intentions of keeping people alive and happy until the world was habitable again? Now you have the chance with Life In Bunker.

Comparisons to Dungeon Keeper were made a lot in the early news of Life in Bunker and while not completely accurate, the game could best be described as an uneven blend of Dungeon Keeper, Fallout Shelter with an overwhelming amount of Banished to add the requisite level of cruelty that comes with survival games, with the added joy of making your life hell. 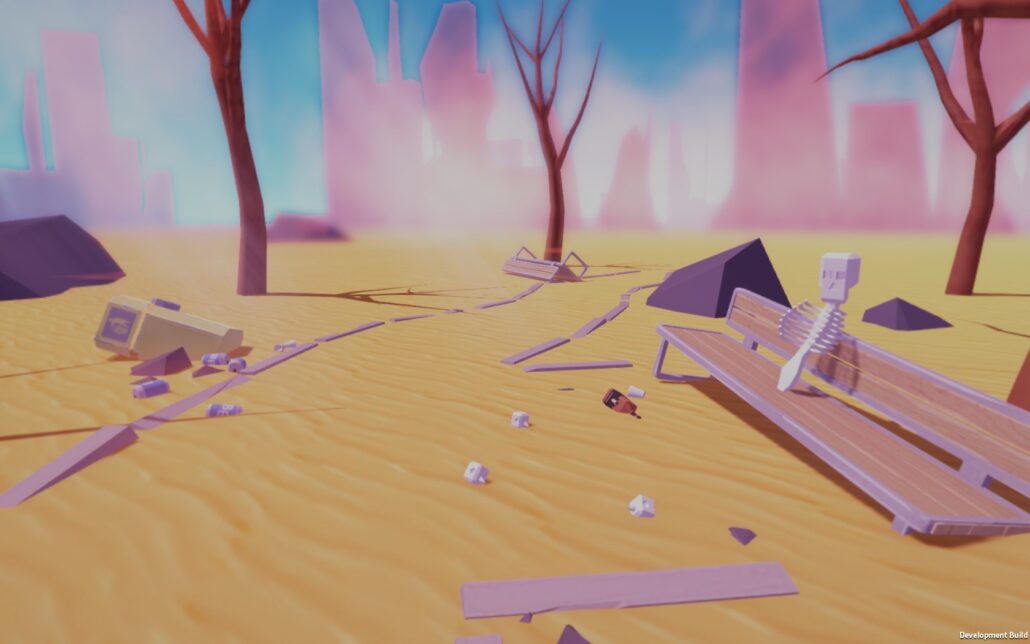 Initially, when jumping in, you'll be in for a surprise as the game can be unintuitive to say the least. Where the average game now will be trying to smooth your introduction with a tutorial that is both fun and seamless, either by creating a tutorial level or merging the tutorial with the first level. Life in Bunker took this idea, ran with it and dumped it in a pool of radioactive sludge, opting instead for a tutorial level containing a huge amount of information dumped on you in text form, clunky menus and difficult to follow objectives.

Like with any settlement, your people have their needs and it's your job to meet them, because damned if they do anything to help themselves. The list of their needs is quite extensive to say the least, ranging from the obvious food, water, air, sleep, leisure and cleanliness of the bunker itself, to almost The Sims level of requirements in hygiene (length of time between showers) and needing toilet breaks. Would that it were as simple as keeping on top of this list of requirements.

In addition to these requirements you have resource management to contend with. Your resources are the people themselves, building materials, ore, power, water, garbage, oxygen, food (multiple types), research and the most difficult to manage, space. There's an abundance of space on any of the game maps, you can dig through a multitude of blocks, but there are also blocks that require you to have researched advanced digging methods. To research these you need to gain points from the lab, but to build this lab you need the building materials, which are gained through first expanding to an ore deposit and having a processor convert that to materials. It all feels too much like a house of cards, ready to collapse should everything not be ideal. 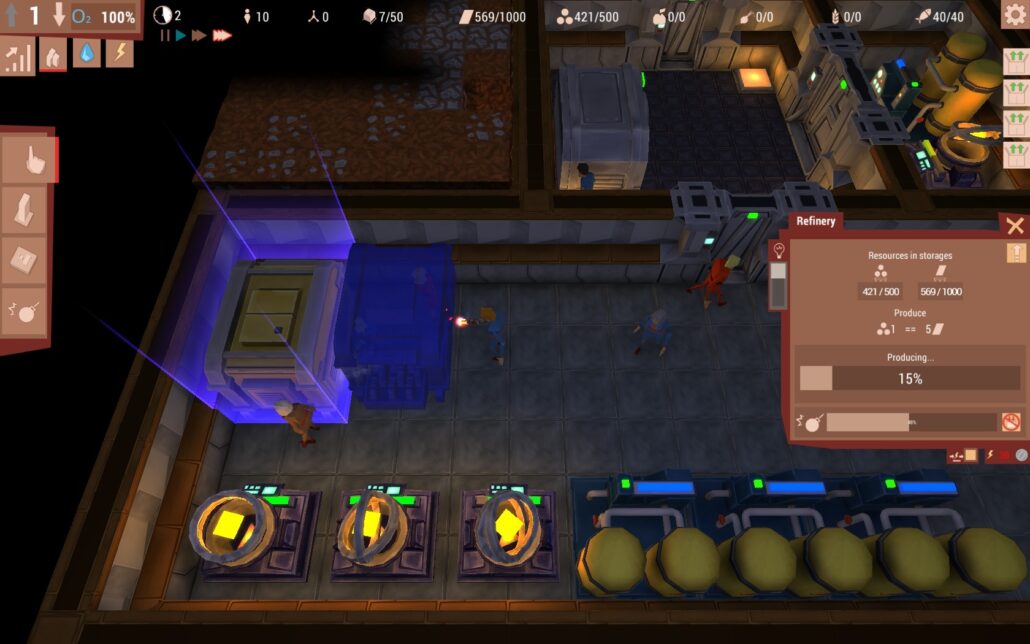 As of now there's only a simple survival mode on offer, where your goal is to survive for 'fifty cycles' when the outside world becomes habitable again. This is the victory scenario, but there's no limitation on stopping you from carrying on indefinitely after that. As a result of this being the only way of playing on offer, the game is anemic at best, offering repeated games if you enjoy the vault building, but there's no real variety on offer with the only surprises coming from randomized events like cave-ins and attacks from giant mole-people.

Even the feature of adding extra levels to your vault, when you uncover a shaft that you can build a lift on, feels pointless. Beyond expanding downwards, once your ore deposits run out on a higher level, there's zero reasons to make that trip. It uses a lot of your materials up, the power and water you generate on the higher level doesn't carry downwards for some inexplicable reason and nothing extra is gained, other than space.

Possibly the most interesting aspect of Life in Bunker so far is the people management. You're starting with a group of people with mixed abilities, of which there are six in total, and you have to assign a job based on the skills a person has. More people are gained not through the ones you have procreated in the dorms, but genetically grown inside an incubator with the desired abilities you want them to have, provided you have enough research points to select the abilities. 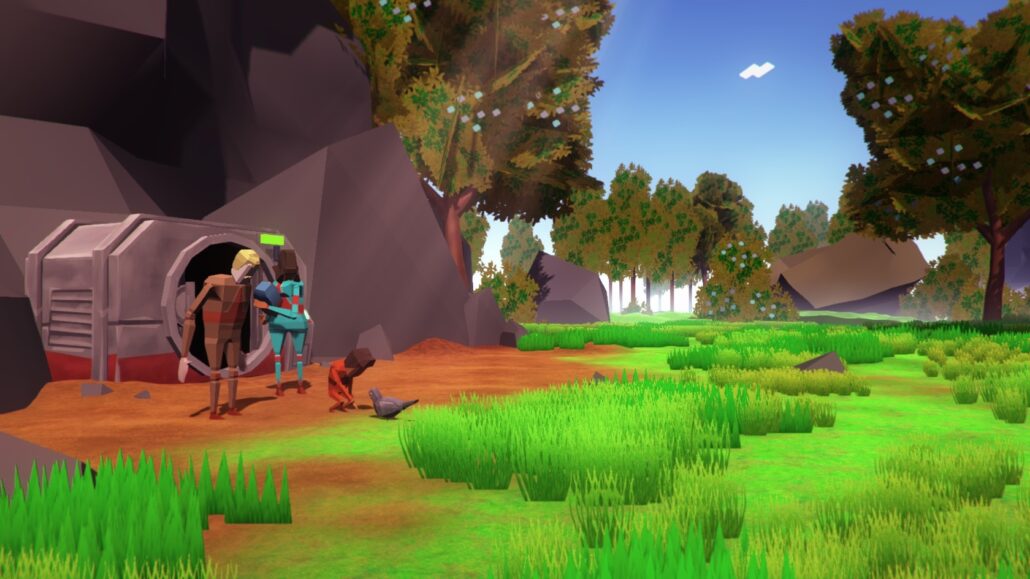 There are a number of core problems with Life in Bunker that, until fixed, will prevent it from becoming a great game. The first that comes to mind can be linked to the tutorial. The clunky menus are carried on throughout the game, with a difficult to manage UI that makes building your bunker and managing your people more of a challenge than it need be. Opening up an informational alert will result in one of the clunky text boxes that I so dread from the tutorial. When you make a mistake, it's never as simple as deleting a misplaced item that your people haven't yet started building, you have to actively go into the item and select to demolish it. Other inconveniences come from the fact that keys aren't rebindable, which means that so much relies on the mouse.

What happens to be the major problem is the outrageous AI, combined with how shallow the game reveals itself to be as you go ahead. The needs of your people have to be met, that's understandable, but when you've created a number of vegetable patches and have a large variety of food stored, you then have to rely on a kitchen to cook those vegetables in. However, should you have difficulty in expanding - which you will - and lack a kitchen, the game refuses to believe that people can do something as absurd as eat a carrot raw. Bugs Bunny be damned.

Countless times I've had my people starve because I either didn't have the room to create both a suitable food cultivation area, storage area, kitchen and living quarters. If I did have the room, I rarely found the required ore deposits, which you have to build a mining rig over, which drills for ore that then has to be set to a processor to create building materials. It's a vicious cycle where the game simply doesn't offer enough materials to give you even a reasonable chance, unless you move the settings to the most favorable options. One thing, which does happen to be a saving grace at parts, the people don't care where things are put. Feel free to having a toilet right next to the cooker, if that's what you want. 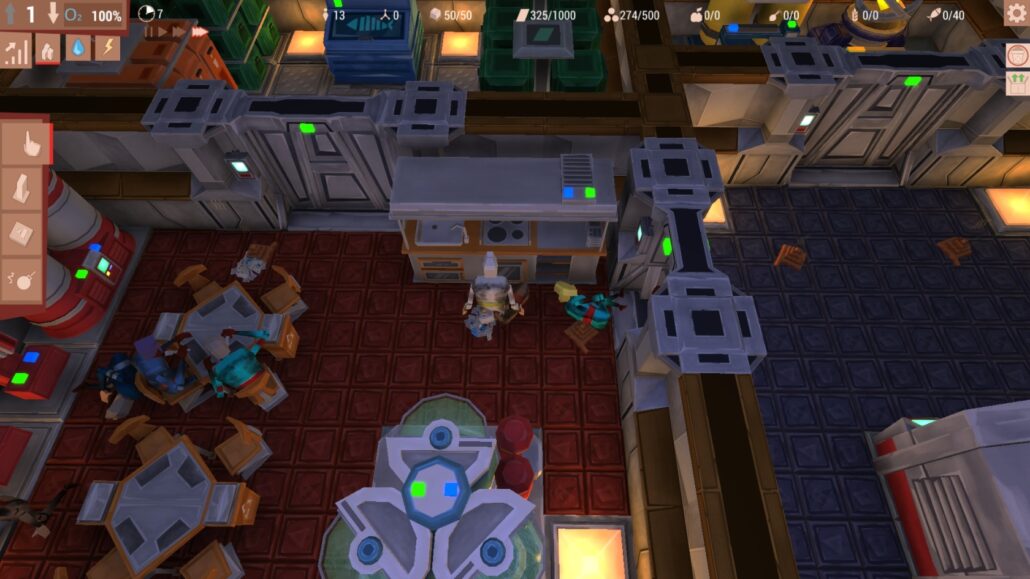 Life in Bunker has something about it that makes me want to like it. Be it my fondness for this sort of game, building a self-sufficient settlement, its similarity to such as Dungeon Keeper or Evil Genius in ways. However, for any similarities it has, there are others it falls down. The lack of content, the user-unfriendly UI, the AI and the prohibitive difficulty due to the randomness of maps, or difficulty in gathering resources, means that the game isn't the easiest to get into.

Wait for a few updates and planned content to be released and there's certainly a  chance this will be a good way to pass your time. For now, Life in Bunker is best if you're a fan of the genre, willing to work around or ignore the problems and you simply want to build your own vault.

With the clunky interface and gameplay, combined with the price and lack of content, it's impossible to recommend Life in Bunker now. Does it have potential? Most certainly, but for now, it's unrealised potential.