When LEGO finally announced they were creating a blocking building video game, the entire community wondered where they had been for the past six years. Minecraft, in case you hadn't heard, is a hugely popular block building game. It released about six years ago, and since then made literally all the money.

Children who do nothing but play and consume the game would describe it to their bewildered parents as like playing with LEGO but in a video game. This is not a new concept, but with the eventual release of LEGO Worlds, we can see what the trademarked bricks can add to the open world construction genre.

Maybe not all that surprisingly, LEGO Worlds focuses on standing out as much as it does on building. While Minecraft infamously starts the player with a vast world and not much else, LEGO Worlds takes a more substantial approach. And it becomes apparent early on just how much LEGO Worlds has to offer. Rather than having a huge uninterrupted world to ramble over, LEGO Worlds creates pocket worlds to explore, rebuild in your glorious image, and eventually leave behind. What’s more, LEGO Worlds removes the expectation of time from construction. While Minecraft and other games force players to invest time and effort in gathering resources and organizing the build, LEGO Worlds is quicker, letting players build bigger, weirder and more sophisticated creations much quicker.

The fundamental difference between LEGO Worlds and other games is that LEGO doesn’t try and feed the oh-so-familiar hypnotic repetition of other building games. To everyone that has played other games, and lost countless hours meticulously excavating a mine, or flattening some unruly topography, LEGO Worlds takes that away. LEGO Worlds gives you a surprising amount of tools to alter the world. You can flatten the landscape to any level you, you can build block by block or quickly pile up bricks in quick succession. You can even copy whatever you want to quickly paste, or save for later.

Players that want to painstakingly create an entire world can do just that, but for those that want to quickly throw a structure together and move on can do that too. This becomes even more apparent when you stumble across the quests scattered through each little world. The lands of LEGO Worlds aren’t barren, and you’ll find all sorts, from cavemen to merry men on your travels, and some of them need help. Mostly its more of the same, they need a specific item or structure completed. The items can’t be built, they’re scattered through the world and available at to buy from the merchant. Sometimes you won’t be able to find the item you need in the world you need it, so backtracking might be necessary. Building gives you the opportunity to stretch your imagination and experiment a little. Perhaps they want a horse stable built, so of course a multitiered nightclub is the obvious choice. The conditions to complete the quests are always fairly vague letting the player choice how much effort to put into each quest.

Your reward for quests is unlocking bigger and bigger worlds as well as getting access you more building tools down the line. It might feel a little contrived but LEGO Worlds makes sure you are always involved in the game. This is something that lets you turn off, and to really enjoy the game you’ll have to stay switched on.

Luckily the game has a few tricks to make sure you’re still engaged, like zombie cheerleaders. Occasionally, unusual situations present themselves. Most commonly you’ll spot strange little goblins crawl out of the ground. They’re carrying LEGO bricks and if you can catch them you can use the brick in the future.

With vehicles, NPCs and quests, LEGO Worlds has its own stamp on the incredibly popular genre. There are thousands of unique LEGO sets the game draws inspiration from and I can honestly say that tens of hours players and I’m still discovering new things. LEGO Worlds' biggest letdown, at least on console, are the awkward controls. With most projects requiring multiple tools, swapping in and out of what you need can be a hassle, and trying to be precise is nearly always fiddly. The team behind the game have clearly tried to balance the issue, letting you overlap blocks and a few other tricks, but it was clearly designed to work better with a mouse. That is probably true of most building games, and unfortunately the more varied nature of LEGO makes it all the more obvious.

LEGO Worlds is the biggest departure for the LEGO series to date. While the graphics still look familiar, with bright exaggerated colors and distinct blocks, this game moves away from nearly everything you expect from the series. It doesn’t have any licensed products, so don’t expect to stumble across a Millennium Falcon or school of Witchcraft and Wizardry, it doesn’t have a particular story. But it does what LEGO was always meant to do. It lets you build detailed and expansive nonsense.

When I was young, my dad and I used to play with LEGO together, building a little village up the side of the staircase. It wasn’t much but little huts connected by LEGO walkways and staircases, but it was one of my most vivid childhood memories. Being twenty-something and having responsibilities meant that I’ve never had the chance to try and recreate that. But now, in the corner of a massive farm world is a giant terraced mountain side, with a little village slowly being built up each massive step. LEGO Worlds lets you create what you want, with every LEGO piece you can think of.

Reviewed on PlayStation 4 (copy provided by the publisher). You can buy the game for PlayStation 4, for Xbox One (Physical or Digital) and for PC (digital only) via Amazon. 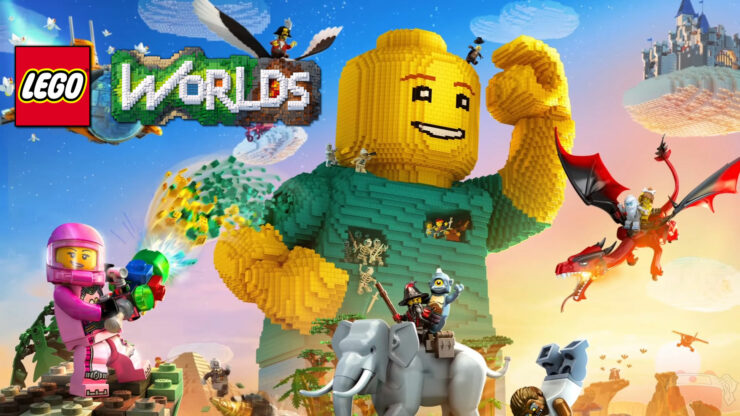 LEGO Worlds does an interesting job in standing out from the competition. It has had years to develop its own brand of digital block building, and for the most part it succeeds. Although its controls are a little fiddly, its freedom to build and explore are amazingly detailed.