The Homefront IP had a troubled history since its very inception. The original developer, Kaos Studios, was closed in June 2011 (just three months after the release of the game); Homefront's sequel was then handed over to THQ Montreal before THQ dissolved and sold the rights to Crytek.

In July 2014, Crytek sold again the Homefront IP to Koch Media alongside the whole Crytek UK studio, now renamed Deep Silver Dambuster. To say that Homefront: The Revolution went through problems during its development would probably be an understatement, and the recent beta test got heavy criticism from testers. But I still hoped that the game would turn out to be at least fairly good, mainly because I loved the premise.

I wish that I could confirm this to be true after playing the game, I really do. Unfortunately, I just can't. Homefront: The Revolution is a mess in so many ways that it's hard to understand how the studio could think this product would do well enough, starting with the performance.

I've read some reports about frame rate issues on PlayStation 4 from early owners of the game. I can't comment on that, as I've reviewed the game on PC, but I can tell you that Homefront: The Revolution is poorly optimized for this platform. That's even after NVIDIA released a dedicated GeForce Ready Driver (365.19).

With an i7 3770, 16GB of RAM and a GTX 980Ti (the game doesn't support SLI in any way, so you're better off disabling it), playing at 1440P with most settings on Very High is an experience full of stutters and slowdowns as you can see in the gameplay footage below.

What surprised me even more, though, is that dropping the resolution to a meager 1080P - a resolution that the GTX 980Ti eats for breakfast - didn't completely eliminate the issues despite the much smaller (and therefore much less crisp visuals) amount of pixels rendered. At any rate, you would be mistaken if you thought that all these performance issues could be explained with a new benchmark in videogame graphics - far from it.

Even though Homefront: The Revolution is powered by Crytek's CRYENGINE, this might just be one of the worst showcases of CRYENGINE ever produced by a triple A studio. While the game can look quite good at times when the stars align, that is to say during nighttime and a powerful rainstorm, generally its graphics are brought down by a bland and uninspiring art direction.

During my playthrough, I also encountered a number of visual bugs such as objects/bodies floating midair and one particular area near the docks that wasn't properly rendered. 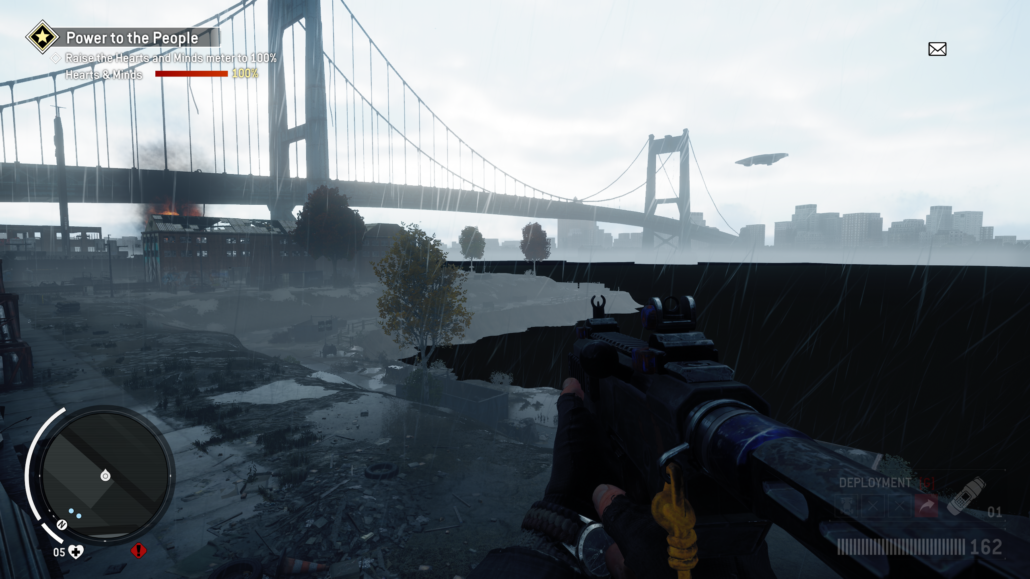 But how does Homefront: The Revolution play? Like a standard, cookie-cutter open world FPS. Far Cry is a clear inspiration, though this is a pale imitation for the most part.

The basic premise is that the player character (Ethan Brady) is a newly appointed member of the resistance movement in Philadelphia. His goals are to help the resistance by completing different objectives in each map. Philadelphia isn't a seamless game world: each zone is separated from another, with tunnels being the most common way of moving between them.

The zones are divided into Red, Yellow and Green. The main difference is that Red zones are suburban areas where it's all out war between the Korean People's Army (KPA) and the resistance, with no civilians to be found anywhere; these maps are also a bit larger and can be explored with bikes. This is perhaps one of the coolest aspects of Homefront: The Revolution, since in Red zones you can always find skirmishes between AI controlled KPA and resistance soldiers, with lots of radio chatter that makes it feel somewhat real.

Gameplay is quite a bit different in the Yellow zones, for instance, where civilians still live a somewhat decent life with fewer KPA soldiers on patrol - in this case, it will be more about stealth and avoiding patrols/cameras, though eventually you'll have to shoot someone. About that, shooting feels just barely decent without being a standout while the enemy AI proves to be a decent challenge even on Normal difficulty: even with the 25% damage reduction vest on, you can go down with just a few bullets. You can "recruit" fellow members of the resistance, which basically consists of walking up to them and pressing a button. Their icons will change on the minimap and they'll follow you for a while, but they're not very useful and you can't command them in any way, which could have been nice.

In all zone types, Brady will have to raise the morale of Philadelphia's population by completing small tasks such as turning radios on "resistance channel" and, of course, by assaulting enemy strongholds. These are called Strike Points and once taken over, they become resistance bases. 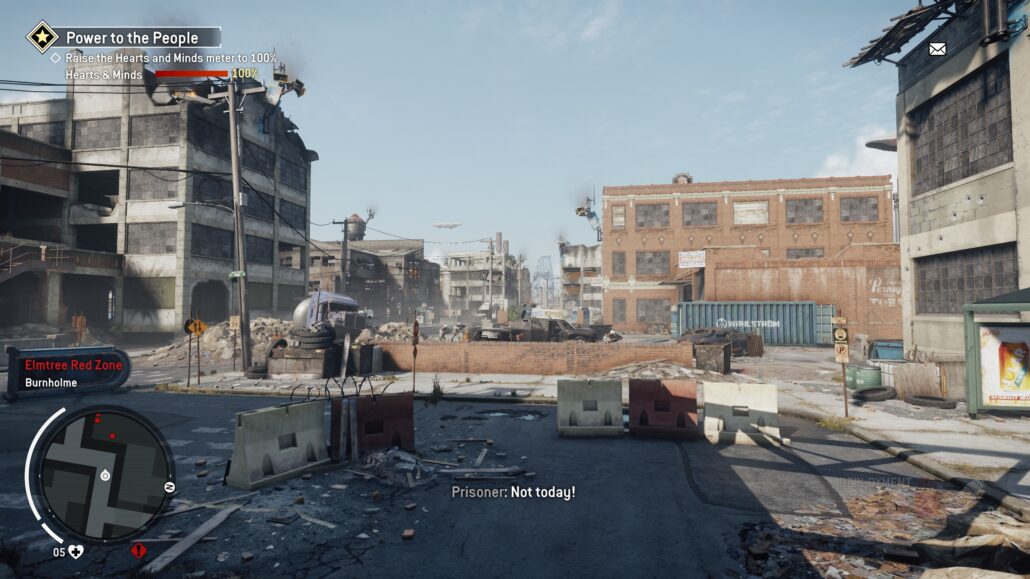 Taking them over should be the most engrossing task outside of story missions, but it isn't. For starters, they're not varied enough to be interesting for a while, but that's just the tip of the iceberg. Unlike most open world FPS titles, you don't need to actually eliminate your enemies before conquering their base.

You just have to run to the objective, be it a wheel to turn or a radio to switch on, and no matter how many enemies you'll have on the heels a short cutscene will ensue and they will all magically disappear, with the resistance conquering the base. I'm completely baffled as to how anyone could think this would be a good idea.

Other than Strike Points there are also Jobs, which are minor tasks that can be found on bulletin boards, and Flashpoints. These are situations where the resistance needs Brady's help at once, and they will disappear unless taken care of immediately. Once again, though, the missions end up being too similar to each other to entice the player.

The story suffers from a similar fate. Some of the main missions are more interesting than others, but overall the characters are just too plain and obvious: there's the disgruntled doctor who needs help with his clinic, the practical chief, the punk girl who makes snarky comments. None of these are quite memorable.

I was halted in my progress by a game breaking bug, sadly. Once I got to the Ashgate Yellow zone, the story eventually required to win over the "hearts and minds" of the district's people in order to assault a police station. However, for some reason none of the activities registered progress anymore and the bar was stuck at 0% even after I liberated the map's Strike Points (which for some reason didn't show up on the map as they used to). I'm pretty sure that the developers will fix this bug, maybe even with the Day One patch, but nonetheless this is the first time that I was unable to complete a game I had to review due to a bug.

Still, I feel confident in saying that the plot isn't Homefront: The Revolution's worst offender. Let's face it, few first person shooter games have provided a captivating story in the past years. If the gameplay and performance had been up to snuff, it wouldn't have been a huge problem.

Setting aside the single-player campaign, the game also allows up to four players to band together in a cooperative Resistance Mode. Unfortunately, there was no player to be found before release but I've launched a private game and played for a while in solo. As expected the core game is still the same, with all of the aforementioned issues.

That's not to say I didn't have any fun while playing Homefront: The Revolution. There are some nice moments, glimpses of what could have been a great game, but they're just too few and far between to be able to save the experience.

Reviewed on PC (code provided by the publisher). Game also available for PlayStation 4 and Xbox One.

Homefront: The Revolution is a disappointment no matter how you slice it. Maybe Deep Silver Dambuster can improve it over time and when that happens, the game could be worth a purchase in a sale; as it is, though, it simply cannot be recommended with many better options available for gamers.