August 31st marks Hatsune Miku’s ninth birthday. In that short period of time, this synth pop maiden has become somewhat of a pop culture diva, bridging the gap between music and various forms of media that changed the landscape forever. With her auto-tuned charm, Miku’s charm comes alive with only the use of a vocal synth engine known as Vocaloid and the creator’s dreams. With an undoubtedly unique style of singing, Hatsune Miku has been seen in ten different rhythm games and the newly released Project Diva X marks the fourth title to reach a global audience on both the Playstation 4 and Playstation Vita.

Hatsune Miku: Project Diva X retains the same rhythm-based gameplay that made the series famous with 2012’s Project Diva F release. Rather than having notes come in across a static chart in the likes of Rock Band or Dance Dance Revolution, Miku’s notes come streaming in from all corners of the screen while the digital Vocaloid sings and dances her heart out on a live concert backdrop. With so much happening on screen, it can be difficult to keep track of notes by a visual standpoint but they do a fine job of timing notes along with the more toe-tapping rhythms of Miku’s tunes. Not much is new in terms of note styles, with some of the trickier moves taken out of X’s experience and instead replaced with Rush notes, where players have to hammer down on a particular button as quickly as possible for the highest score bonus.

Project Diva’s X tracklist can easily be the title’s weakest attribute. While it may be unfair to try and compare X’s setlist to something like the robust 200+ tracks on the Japan-exclusive Future Tone release, it still falls short compared to the previous two titles release in North America. Both Project Diva F and F 2nd featured at least 40 tracks with some being additional DLC whereas X’s selection tops out at a meager 30 songs. Thankfully, nearly all of these tracks are new additions to the series with only a couple tracks making a repeat appearance this time around (as well as in brief medleys for each of the game’s five zones).

If you’re looking to spend some quality time with the other Vocaloids besides Miku, you might find yourself disappointed with how few appearances Miku’s friends join in to sing. Kaito, a personal favorite from previous titles, only makes an appearance in two songs across the entire title. However, each of the Vocaloids have a great number of accessories and modules to customize their appearances to the player’s liking. This is truly a case of where some Vocaloids are better seen and not heard. 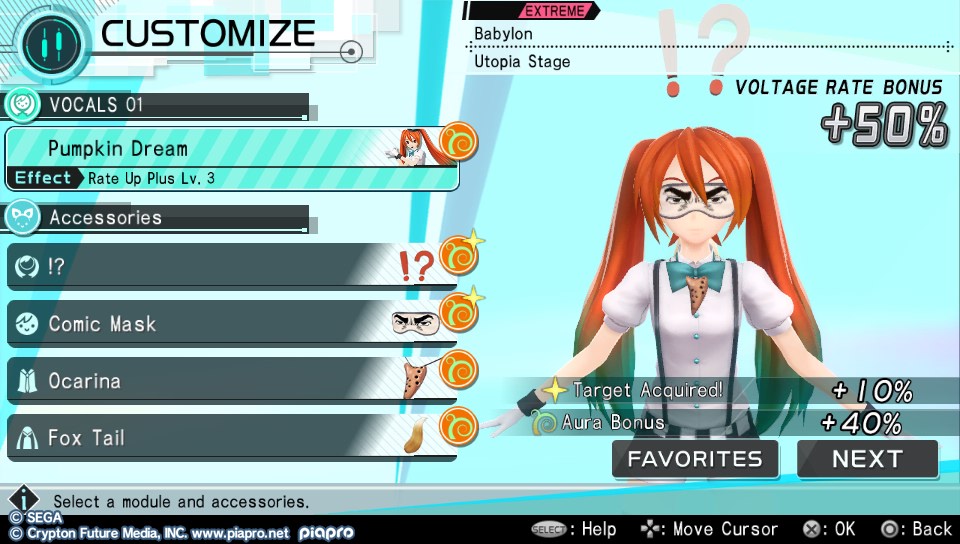 Playing through each of Diva X’s thirty songs is only the beginning of the activities available in Miku’s portable world. After clearing through the meager setlist the first time around, Miku opens up and expands what modes are available with a slew of additional challenges and difficulties (I might argue that the game doesn’t get fun until Extreme Mode is unlocked). With the traditional Free Play mode removed from the experience, in its place are special Requests that the Vocaloid crew issue to the player with special goals and requirements to unlock additional Modules (Project Diva’s term for costumes) and accessories to customize the Vocaloid crew. 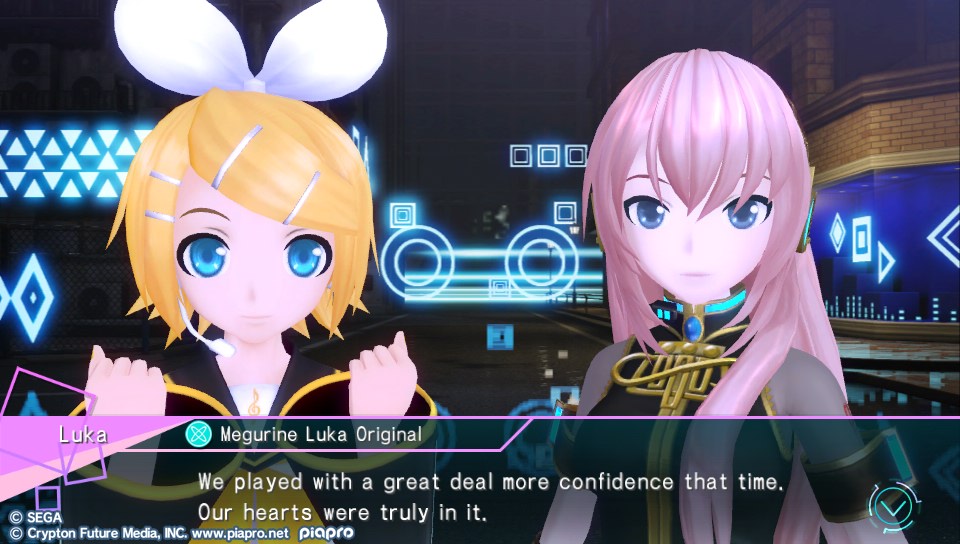 Miku and friend’s Modules do more than just give the Vocaloids a fresh pair of duds. The primary Modules each offer up their own skills, ranging from score bonuses and making certain sections of songs easier in terms of timing. Each Module (and accessory) is also tied to one of X’s five style zones, so depending on which song you’re playing, that sundress you put in Meiko might actually give a substantial score bonus. Playing dress up might not just be something to do to help draw some extra life into X’s gameplay loop; you might get handsomely rewarded with a higher score for doing so.

While the staggering amount of costumes (over 300 split between the six Vocaloids) and accessories give a heavy amount of creative freedom in the Vocaloid’s appearances, not every player will get the same longevity out of the experience. The amount of time sent together with Miku and her friends rests wholly on just how many times the player can enjoy listening to Urotander: Underhanded Rangers with different challenges.

Hatsune Miku: Project Diva X is another fine handheld entry into the rhythm game series, but in the end I was left wanting more. Miku definitely offered more in terms of style and costume customization than her other onstage appearances but without more tracks to sing along with, the amount of challenges and requests to perform satisfied my rhythmic desires faster than the previous two titles I’ve enjoyed.

Hatsune Miku: Project Diva X is another fine handheld entry into the rhythm game series, but in the end I was left wanting more. Still, genre fans can't go wrong with it.