Doomed. Hard Reset Redux is a game like many others attempting to rekindle a nostalgic sense of adventure and whimsy in its players. The original title released in 2011 was already built as a throwback to the arcade days of silly, comical violence, and its HD repaint is an attempt to once again to inspire the audience of the fun of yesteryear.

Unfortunately, Hard Reset Redux is released almost immediately after Doom, another refurbished title built from older themes of video games. However, id Software decided to completely rebuild the genre from the ground up with Doom, rather than recreating an old game with better graphics and quicker loading times,.

It has completely changed the way we perceive the way older games are presented to modern audiences, and regrettably makes other titles, such as the newly restored Hard Reset Redux look a lot less interesting by comparison. 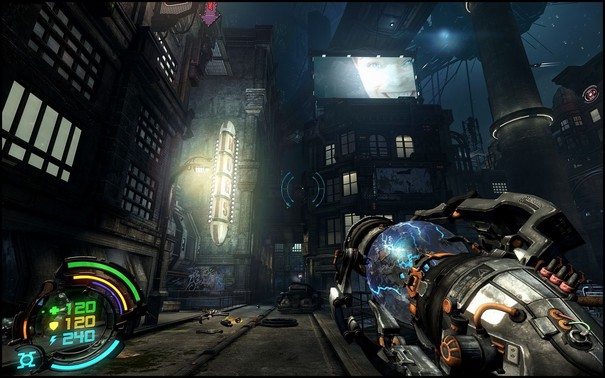 But this isn’t a review of Doom, though it’s impossible to review Hard Reset Redux in a vacuum. This is a game about killer robots attacking the last bastion of humanity, in an attempt to steal the digitalized consciousness of humans. You player as an agent of the corporation assigned to protect the besieged city.

The streets of the city are deserted of life, plagued instead by the patrolling mechanical killers. Much like older titles like Red Faction and older Doom, your objective is often little more than walking forward, killing the horde of automatons that come springing from manholes, air vents and rooftops then walking forward again. Its fast paced, with most enemies, short and melee focused, forcing you to dodge and weave between foes as gun them down. The robots don’t always react to the bullets and plasma in a particularly satisfying way. Although not necessarily ‘bullet sponges’, the robots launch themselves undeterred by damage until quite suddenly falling dead.

Some of the larger enemies have specific parts of the exoskeletons that can be targeted, but this only highlights the incomprehendable damage of the other foes. Luckily the game’s gunplay is punchy and you can feel weight of the bullets you’re firing, even if the enemies don’t.

But what really sets Hard Reset apart from Doom, and the reason it feels so dated, is the familiar, dreary setting. The city streets are soaked with darkness and ambiguity. As you crawl from level to level the same clichéd dystopian structures will jut out of the darkness, interrupting your extremely linear path down streets, alleys and weirdly barren buildings.

The whole thing seems a bit lacking, both in detail and style. This bleak picture of humanity is one that has been painted many times before, and much better. Clearly inspired by Blade Runner, the city lacks all the imagination and built-upon-decay style that makes the film so iconic. Instead, we are given a bland vision of a lifeless city plastered with electronics and neon. The level design feels equally artificial. Bridges, blockades and force-fields prohibit your exploration of the city, and poor signposting has you unsure which way you’re meant to go. Doors, and pathways look accessible until you find yourself bouncing off them in an impotent attempt to progress. This repeated time and time again through the relatively short campaign, becoming no more charming than it originally was.

Enemies somewhat suffer under the plague of uninspired design. When confronting by a swarm of enemies picking out the variations is almost impossible, yet vital to your continued existence. Some enemies attempt to cut you apart with bloody chainsaws, while others detonate when within range. Despite the spinning blades, both look remarkably similar when meshed into a horde. 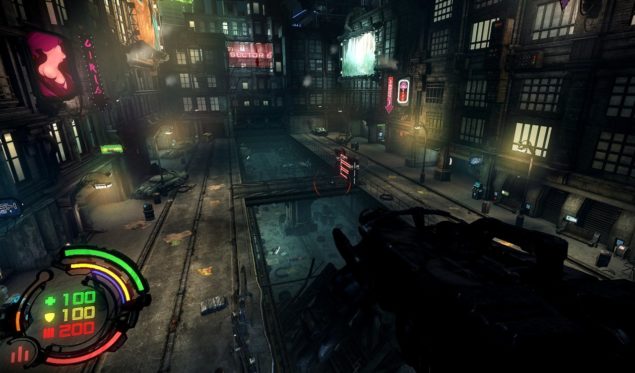 These encounters are frequent and kinetic. You’ll be bouncing around from explosions while the scenery erupts into deadly sparks. It's all fun and pleasant enough, but you’ll never be lost in the game world like other titles. You’ll never marvel at the landscape or graphics like other games. Although there is some variety to the weapons, none offer you any new way of playing the game.

The issue with Hard Reset Redux, and why I’m struggling to find the positive in the title is Doom. While the latter brought the game world in a modern era, building the product on a blend of current and classic gaming conventions, Hard Reset relies entirely on the sense of nostalgia.

Our memories often betray us, and we’ll often think of old games with rose tinted glasses. Doom was built to meet those superior expectations while Hard Reset was a realistic depiction of the original game. All the old problems we had with the shooter genre before its more cinematic make over are clear to see. Hard Reset Redux isn’t a bad game if you know what you’re getting, but compared to other remakes just hitting the market, there’s something profoundly lacking.