There’s something about Gundam Versus I really want to love. A soundtrack from across years of Gundam history, Gundam Mobile Suits both new and old, a variety of stages, big 3v3 battles with robots sliding and dashing around in an aerobatic display… Yep. Gundam sounds right up my street.

I can’t stand to play it for even another minute.

It all starts with a three-stage tutorial that teaches you what each button does individually - yes, the thing you could do by standing on a stage and trying out each button is the entire tutorial. And it teaches you nothing else. Here’s what you need to know about how Gundam Versus plays; you’re in a large area, and your camera automatically locks onto the nearest enemy - you can switch targets with Circle. X is a jump, double tapping becomes a dash, Square is a ranged gun and Triangle is an up-close melee option. Your shoulder/trigger buttons can all be different, depending on your choice of Mobile Suit and supports.

The problem is, the tutorial doesn’t actually teach you how to play - it teaches you what the buttons do, and those two things are a world away from one another, as jumping into any online game will soon teach you. But of course that’s no reason to give up, you can just hammer away at some single player content until you understand what’s happening.

The single player content is quite possibly the dullest and most insulting I’ve seen in a game in recent memory. You thought Street Fighter V was bad, well I would absolutely adore some crappy voice-acted cutscenes that give me some semblance of a story or events happening, Gundam Versus really doesn’t care. You get Ultimate Battle, which is a wave-based survival affair. That’s your single player content. All of it. 15 waves, 30 waves or 50 waves.

Of course, you could always hop into a training room. Which, in reality, you could just use the 15 wave Ultimate Battle instead because it’s not like they fight back. The meat of Gundam Versus is in its online battles, where you can play 1v1, 2v2 or 3v3 against people from around the world. Good luck finding anyone playing those larger games though - the matchmaking in Gundam Versus varied from finding games instantly, to having the connection time out. But regardless of how many players are in your room, it’s still the same game.

Of course, there’s more to battles than just going up to enemy Gundam and smacking away at Triangle until they die. Double tapping directions on the D-Pad will have you Quick Dash, which cancels melee attacks, opening up a world of fake-outs and new combo opportunities. And just like in a fighting game, each Mobile Suit’s unique abilities come into play here; you can mix your Support and other abilities into your combos, and luckily you’ll be able to know if you’re in range by the lock-on reticule at all times. A Yellow reticule means they’re out of range, while a Red is in range, and a thicker Red will mean they’re in range for melee combat.

But no matter how much I love the idea of robots flying around a battle arena, and no matter how much I adore Iron Blood Orphan’s emphatic opening playing while I do battle, I can’t stand Gundam Versus. The Gundam mechs never feel like they’re doing what you want them to, controls just feel so incredibly messy. Not to mention to put your Guard it requires you to press down, and then up. They dedicated a button to switching which character you lock onto, but not to blocking. It doesn’t help that even though these are supposed to be several-tonne monstrosities, they all have the same bloody hit stun animation where it looks like they have a cramp in their leg and can’t stretch it out.

Gundam Versus feels cheap. It feels like a Gundam game because Gundam fans haven’t had one in a while and will buy anything. Sure, there’s loads to enjoy if you want to go over every generation of Gundam and play with them against people online, but here’s the thing; there are much better games available for you to spend your time in, and you should demand better than this from a franchise you love. 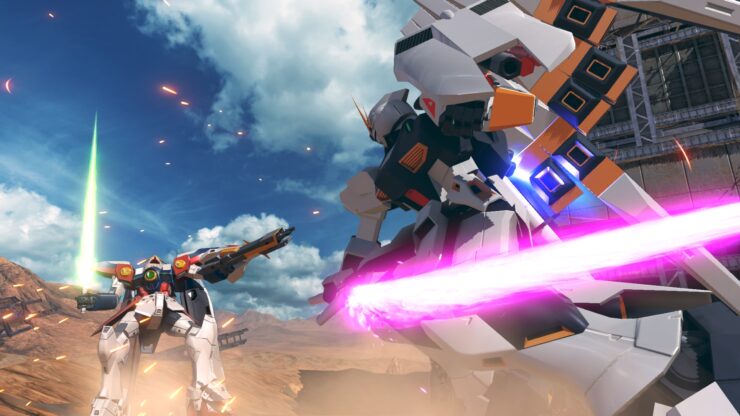 Gundam Versus takes inspiration from across the Gundam universe and just throws it all unceremoniously into a bucket. What could've been, and should've been, a celebration of Gundam history comes across as a cheap cash-grab. I can't recommend this in good faith to anyone but the most mecha obsessed.