God Eater 2: Rage Burst Review – Not Bad, but Quite Boring

What do you call a mission based action JRPG where you kill large monsters with larger health bars (visible or otherwise)? Well, you’d probably call it Monster Hunter. Sure, God Eater 2: Rage Burst sounds like Monster Hunter on the outside, but is actually a different beast – but whether or not that’s a good thing is a different thing entirely…

God Eater 2: Rage Burst is a cute anime-styled JRPG where you fill the shoes of our favorite hero, Silent Protagonist, while trying to rid the world of the Aragami – those being the weird demon-monster-God things you’ll be killing. Anyone who’s familiar with the original God Eater, or the short anime series, will know exactly what’s going on, as God Eater 2 picks up where those left off.

Despite comparisons to Monster Hunter, God Eater 2 is most definitely its own beast. While Monster Hunter lets you tell your own story of Hunter VS World, with perhaps the motivation of saving/helping a village, in God Eater 2 the narrative is in place and you are a cog in that machine. Our Silent Protagonist becomes a God Eater, one of the few warriors that can wield weapons to eat and absorb the strength of the Aragami, for this is the only way to save the world. It’s a heavy plot, and honestly, it’s rather unwieldy.

As a post-apocalyptic game where fight against evil Gods, there’s a fair bit of lore to sink your teeth in to. But unfortunately, so much of it feels so very… Boring. Laced with esoteric terms and generic anime nonsense, God Eater 2’s story is hardly the most endearing or interesting. The only time God Eater could get me interested in the game’s dialogue was when characters were interacting with one another, discussing missions, one another, anything. It’s a shame then that they’re generic anime archetypes with little else to offer. There’s cute barely-dressed girl with cat ears, goofy but friendly boy, uptight man, moody-but-good-at-heart man, etc. Generic isn’t the word when these characters feel plucked directly from a list of anime tropes. 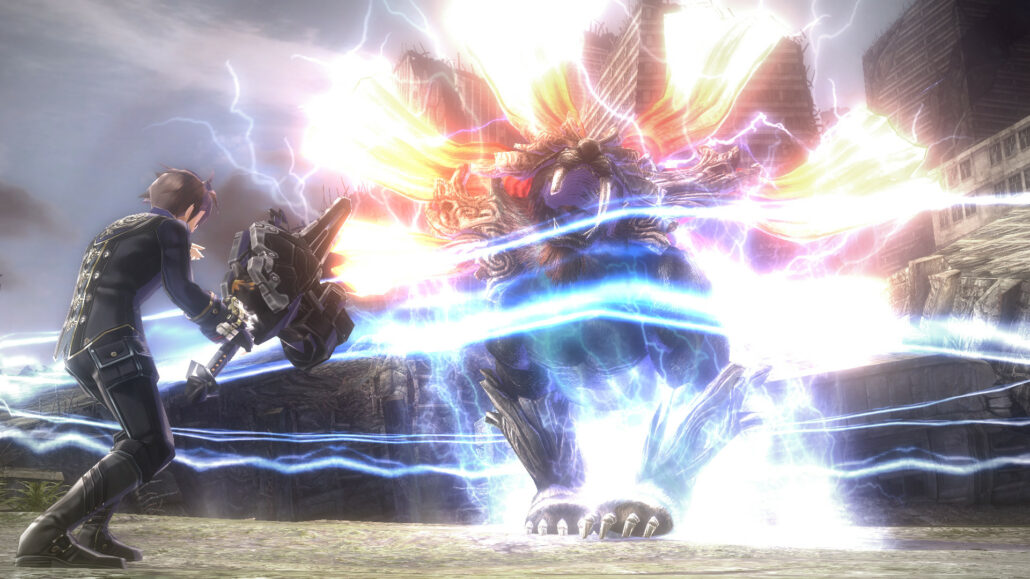 Missions are picked up from a desk in the Friar Lobby, a section at homebase where you can organize items and prepare loadouts for your next mission. Again, here there’s so much to sink your teeth in to, but why would you? In the shop you can fill your inventory with consumable items, but outside of HP and Stamina buffs and restores, why need anything else? It all feels superfluous. And it doesn’t help that the various menus are hardly the most user friendly.

More than anything else, God Eater 2: Rage Burst makes sure you know it was built for online play. Yes indeed, in God Eater 2 you can make an online lobby with a few friends and go about slaying monsters together, and the rest of the game is marred with mechanics that feel built around this system. You’ve finished a mission? Great, now wait 40 seconds while the rest of your party finishes what they’re doing. You’re playing alone? Doesn’t matter, you still have to wait. The design of the Friar Lobby is built around this too – a nice central location to fill up on items, change equipment, chat with your real life pals, all while waiting to get into the next mission. Not necessarily a complaint, but these aspects make me feel that playing alone is somehow a lesser experience.

And after all of that, we get down to the gameplay. The generic, unimaginative, gameplay. Press one button for a fast attack, press another for a heavier attack. That’s it. In all fairness, there’s more – you can change your weapon between a melee mode or a gun mode for long-range and aerial enemies. You can dash about the battlefield at a decent speed too, getting out of the way of oncoming hitboxes nice and swiftly. It all comes together smoothly enough, but the monsters are also boring as hell. Too many missions devolve into chipping away at a monster’s health for what feels like an eternity when all you can do is dole out the same combos ad infinitum. Sure, you can move back, fire off some shots from your ranged weapon, but then the ammo will run low and it’s not worth either the wait to recharge nor the items you can use to recharge it. So it just becomes you, and your CPU/real life pals, just mashing away at the attack button, dodging attacks, and repeat.

To be clear, this isn’t Monster Hunter combat, where you’re pitted against a huge beast and slowly wear it down, clinging to its hide, stabbing weak points, narrowly rolling away from sweeping attacks, no, this is God Eater combat. You have a massive dodge, health that refills on death with minimal punishment, a very boring combo attack and a variety of other skills and moves that, honestly, aren’t that varied.

I don’t want to be too harsh to God Eater, as I actually quite like it, but it’s just so darn boring. Characters are generic, combat is uninspired, enemies and their designs are dull, battles can become long and drawn out way before they’re half way to finishing… It’s just not worth your time, especially when you can already play Monster Hunter, or even Dark Souls, to get a similar combat experience which just feels better to play.

Unfortunately God Eater 2: Rage Burst just drips of mundanity. Boring combat, characters, environments... It is not a bad game, just not a particularly good one.