Heroes - that amazing series that was cut down in its prime after only a single year. Isn't it fantastic that the producers didn't bother making three awful seasons and a reboot before calling it a day? No moping, no classic characters killed off and absolutely no random lesbianism. What's not to love? The only downside is that it didn't have a proper video game adaptation, and even with the release of Gemini: Heroes Reborn, well, it still hasn't.

Like The Godfather 3, I've come to accept that Heroes went on much longer than it ought to have done, and even the recent reboot did little to turn around the poor quality. But the idea of normal people suddenly discovering they have magical powers is something that could quite easily lend itself to the digital realm. 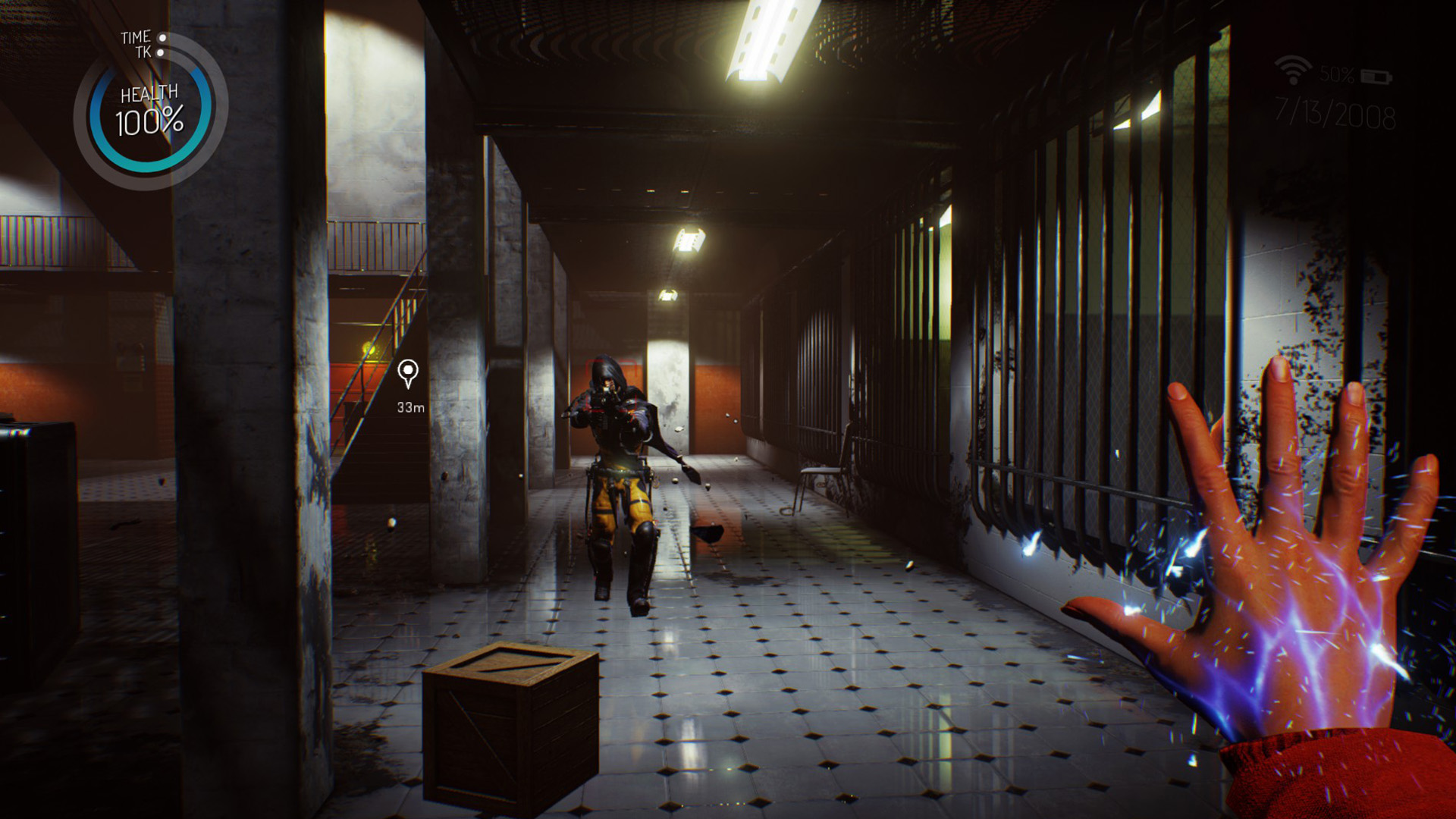 That's where Gemini: Heroes Reborn is at its strongest. You play as a normal girl who suddenly realizes she has the power to jump through time. Forget that she takes to it like she's suddenly found out she's quite good at tiddlywinks - quiet surprise as opposed to trouser-staining confusion - and you almost have a decent character introduction. It has little to do with the TV series and instead carves out its own little segment of the fictional world. It was absolutely the right decision.

Cassandra is basically a goddess. She can slow down time, jump between years and, after she decides to inject herself with a random syringe she found in an abandoned factory, stop bullets with her mind. Don't try this at home.

Granted, her time warping powers are fairly limited. During play you only get to travel between 2014 and 2008, which is fantastic if you want to relive the first time Obama sat his leopard print tights in the White House throne, but not much good for anything else.

Not unless you've got a mysterious factory to traverse and you want to zip back to a time before it burnt down, and who among us can honestly say that wouldn't come in handy?

You can scratch your temporal itch whenever you take the fancy, which can be useful when dealing with enemies or when you want to get around stuff like rubble or locked doors. If you're in a bad position and want to hang back, let your health return or your time powers charge up, hitting a button will whizz you across the ages, back to a better time when we were sure the ending of Lost would make sense.

The occasional discrepancy between the 'present' and the 'past' shouldn't worry you too much, it's an amazing feature and one that I'd love to see done more often. Sure, some mischievous little pixie came along and added doors to an abandoned factory in 2014 that weren't there, or that wouldn't have even been useful, in 2008. But that occasional lapse in detail does little to knock what is actually an awesome idea.

The potential that was there to allow you to make changes in the past that will influence the present is only touched on briefly, and in very linear areas. It often feels more like transporting to a whole other area than between times, but, again, in practice this isn't really a negative point. 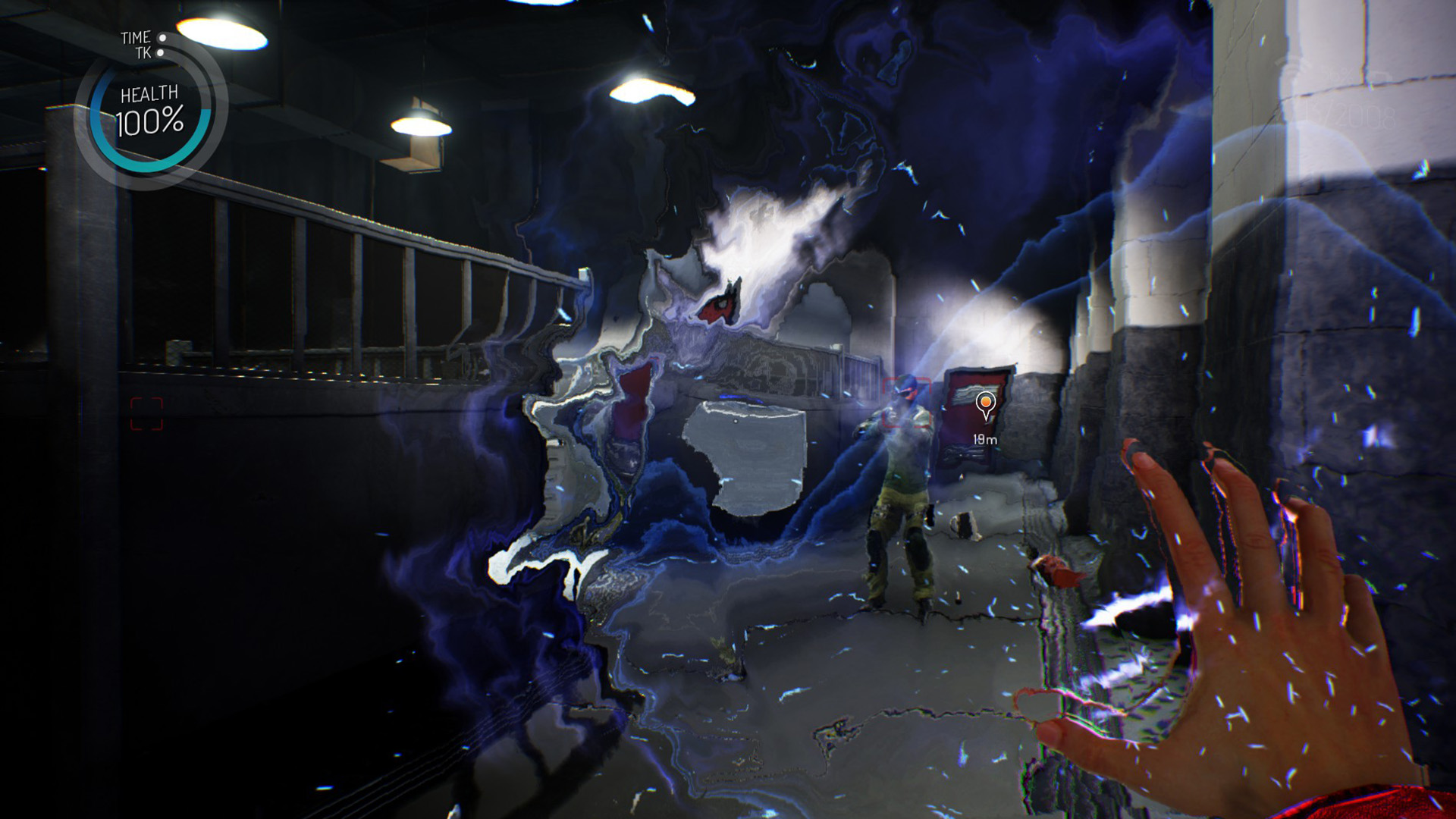 Once Cassandra decides to inject herself with that random needle, she suddenly finds herself in possession of the power to move things with her mind. Needless to say, telekinesis is pretty damn cool.

As you make your way through the factory, you'll sometimes have to use your powers creatively to find an exit. Is there rubble blocking your path in 2014? Transport back to 2008, kill some guards, take their key, open the door in 2008 and then zoom to the future beyond the rubble. Jumping puzzles and increasingly difficult enemies make the adventure more interesting, although by the time the four or five hour adventure comes to a close, it's pretty much played out.

Considering you have a host of exotic powers at your disposal, fighting must be amazing, right? The simple answer is that combat in Gemini: Heroes Reborn is rather limited at best.

For the bulk of your adventure, you have no direct means of attacking an enemy. You can pick them up and toss them apart, but for the most part this will do nothing but make them madder. Occasional environmental hazards offer a more direct means of damaging your opponents, but these are few and far between.

Instead, you can toss objects at security guards or, failing that, slow down time enough to throw their bullets back at them. Considering that she's supposed to be the hero and that until very recently she was just a normal young woman, Cassandra takes to killing almost as readily as Lara Croft - but without the tropical island pirates killing her mates as a motive.

It's a nice system in that despite your power, you're never tearing apart these guards like they're made of paper. Even when you've developed your techniques to their fullest, you must still parry attacks and bide your time, like a Man United fan visiting anywhere outside of Manchester. 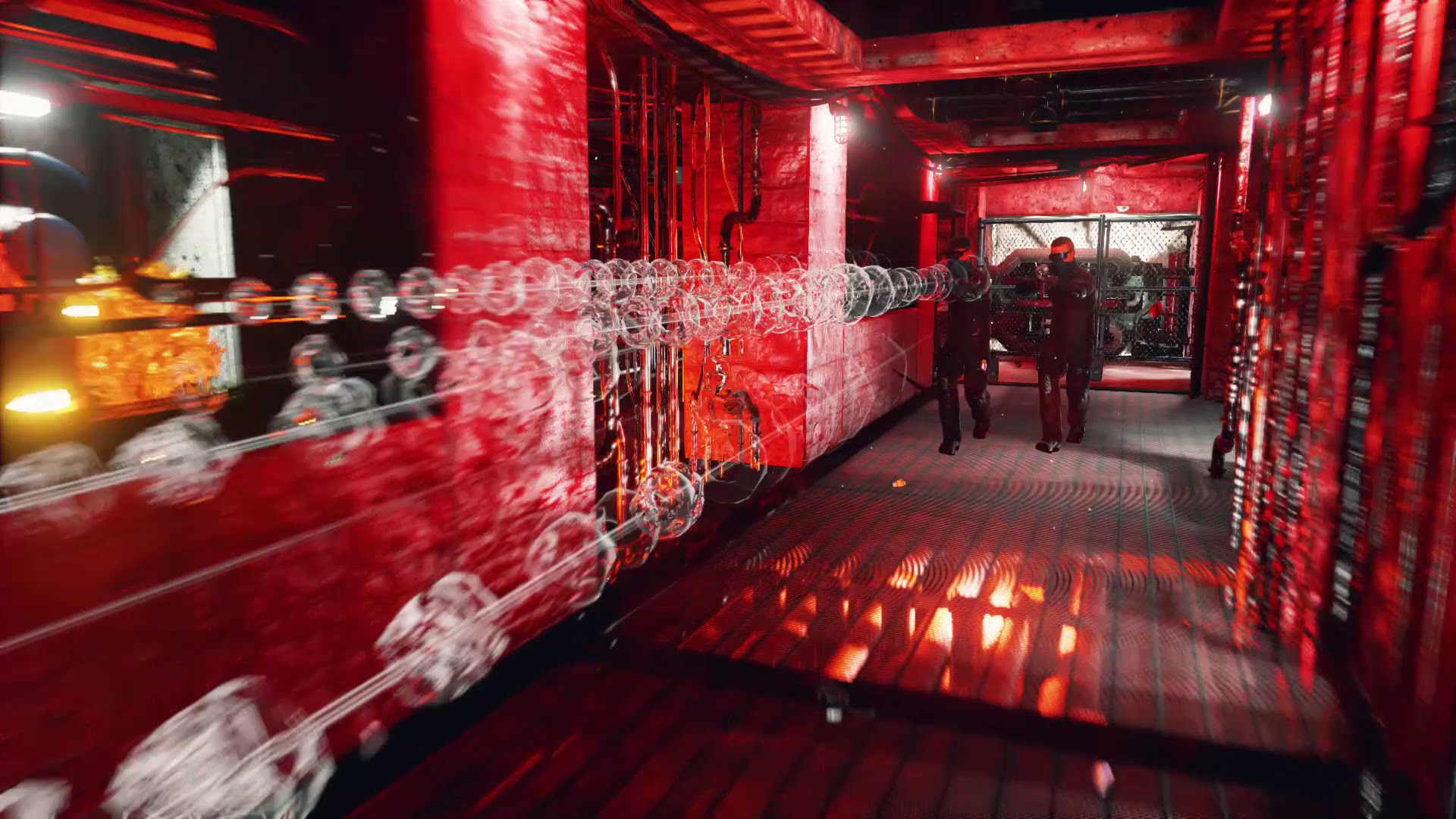 As you progress, you'll discover other kinds of enemies. Maybe they match your speed when you slow time down, or perhaps they have bigger and better guns to throw your way. Ninja ones can hop, skip and jump all over your spinal cord if you let them, but have no means of attacking you from a distance. It's like a giant game of rock, paper, scissors, but with explosions.

Here's the major problem: the enemies are stupid. Walk around a pillar or around a corner, slightly out of their sight, and it'll cause the kind of mass hysteria usually reserved for Salem teenagers and anybody who's ever used a public toilet in a city center. They just won't be able to work out the situation. Come out of 'hiding' and it'll take them a second to work out just where the hell you've come from. It's spectacular. It's just a shame you can't pretend to steal their nose - it'd be an instant kill.

Although all of them are well aware of people with super powers, they seem constantly surprised by your abilities. There's one enemy who uses a rocket launcher, who will shoot at you over and over again despite the fact you fire the rockets right back. Just a fact of it being a game, right? But after each shot, he'll obnoxiously stand there, shouting some variation of "huh?!" or "what?!"

Just as often, they'll bounce into walls or jump into death traps just for the hell of it. I held up an enemy as a shield between myself and a gang of opponents and they seemed to shoot more often if anything. Maybe he kept putting the toilet paper on the holder the wrong way around - there can be no other justification.

Considering the price - $15 or local equivalent - there's nothing especially surprising about Gemini. The gameplay has a few interesting hooks but is eventually not all that impressive, the visuals are decent but not exactly pushing the Unreal Engine 4, but you get a decent adventure for not very much money.

It could have been way more impressive if the story had been more interesting. Cassandra needs to track down her buddy who, for the purposes of needlessly stereotyping, we're going to call Whiny McFriendzone. He's taken by guards when the pair are looking for information about Cassandra's parents. There's very little more to it than that, except in the final few chapters where they try and make it more interesting by actually progressing things along slightly. Each reveal is met with the kind of atmosphere expected from the end of The Sixth Sense. 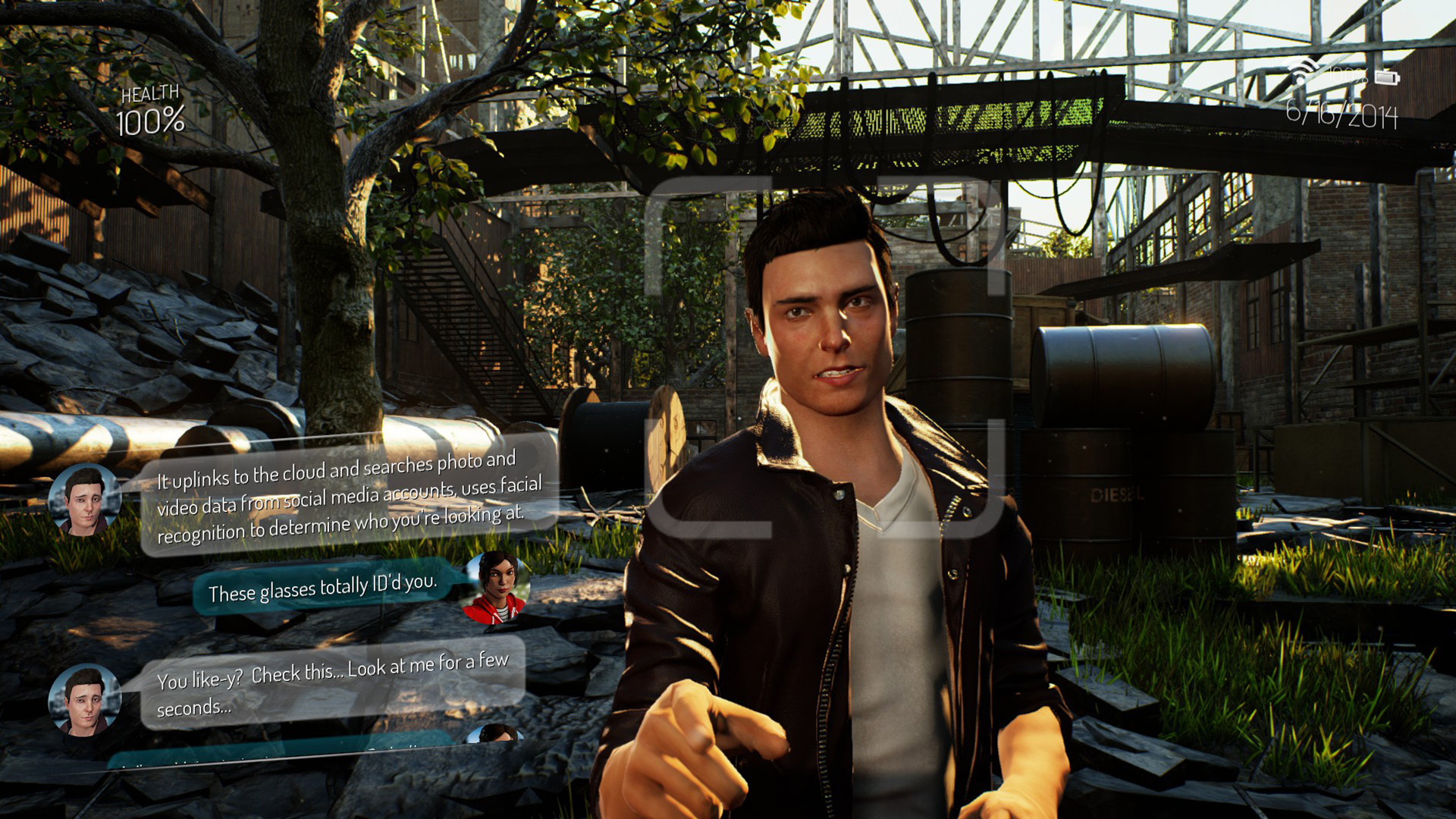 The voice acting is average, but that's probably down to the writing as much as anything. The chance to go through the emotions of someone who suddenly discovers they have a great gift is thrown away. As far as Cassandra is concerned, the ability to travel through time seems to be a neat thing to boost her CV and very little else. Like learning Latin.

That's pretty much the way the whole game is approached. Why bother having any character development when it's just as easy to throw a couple of people at you to kill? She doesn't seem to learn anything, she doesn't seem to have any moral qualms or even a second where she's not entirely comfortable with her situation. She might as well be mowing the lawn, frying a steak, or watching reruns of Heroes. She just sounds bored.

But you know before buying it that Gemini: Heroes Reborn isn't going to a Game of the Year contender. You know that it's going to be a little bit cheesy, that the gameplay is going to be a little bit underwhelming. When we were kids we all played dozens of utterly mid-tier experiences like these, and we had quite a lot of fun. Development studios popped up dedicated just to butchering licenses and it didn't do them any harm. Right up until they all shut down, anyway.

It's about having a few mindless hours of fun, where you can solve a few puzzles, use a few super powers and take advantage of a few unique hooks. If you like the TV series (or are some other kind of masochist) or if you're a fan of these kinds of linear action adventure games, you'll probably have a good time for not very much money. That's a hard deal to knock.