At CES2016 it was more than evident in the peripheral space that this would be the year of RGB.  Gamdias was not to be left out on the beach and decided to ride this wave as well.  That’s where the Gamdias Hermes RGB comes in.  Features full RGB on each key with profiles already installed on the keyboard keeping it from being overwhelming to beginners and offering rather extensive software support for those who wish to customize it further.  Lets dig in and see what all this keyboard has to offer that may help separate it from the flood of RGB keyboards that are pouring onto the market. 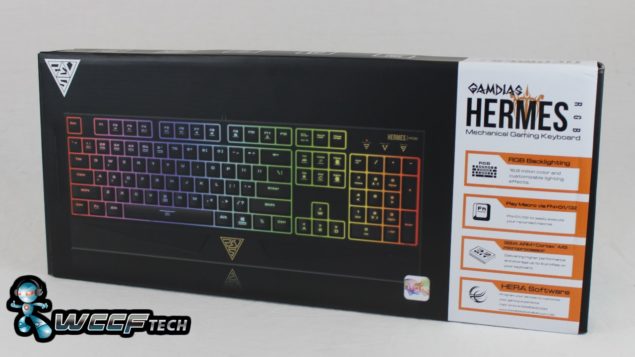 What's in the Box?

The packaging for the Hermes RGB is nicely detailed with the important specifications clearly noted on the box.  Inside the keyboard is surrounded by a thin foam sleeve that helps keep the keyboard clean and scratch free in shipping.  Along with the keyboard you get the manual, sticker set, and a plastic keycap puller

Build of the Keyboard

The body of the keyboard is plastic, but very weighty reminding me of my Steelseries 6Gv2 Cherry MX Black keyboard.  Keeping the design simple enough the keyboard sticks to the tradition 110 key design and lacks any additional macro keys.  Macro keys are limited to two keys, the ‘B’ key and Spacebar become macro keys when the FN key is pressed.  The media keys are located along the top with F2-F9 becoming media keys when the FN key is pressed.   Featuring the FN key in place of the traditional windows key allows the user to reduce the risk of hitting that windows key by accident while gaming.  If that is an issue for you, you can easily swap them in the software.  Speaking of swapping keys, the WASD and arrow keys can be easily swapped from the keyboard without the need to rebind keys in game or software.

The keycaps are typical plastic construction and can be user replaced by most Cherry compatible keycaps.  Under those caps lye the Gamdias “Certified” switches, which are clearly labeled on the key (but not the box) to be Kailh branded switches.  For those hoping for Cherry branded switches I’m sorry to report that they are not.  But, that shouldn’t discourage you as the Kailh Blue’s are almost indistinguishable from Cherry’s, to me they feel very similar but actually sound a bit quieter than their Cherry counterpart.  I must point out that with mine I had to remove the 4,7,6,9 keys and file down part of the plastic on the keycap since there were burs left from the manufacturing process that caused these keys to catch each other.

Listen below for a sound test.

The back of the keyboard features the adjustable stands that are a bit difficult to pull out without longer fingernails or assistance by some type of wedge.  There are six rubber feet, which in conjunction with the weight of the keyboard keep it firmly planted on the desk even under heavy typing and gaming sessions.  There are channels that allow you set the cable to come out of the left, right or center of the keyboard, but the cable never stayed in place so I found it useless. 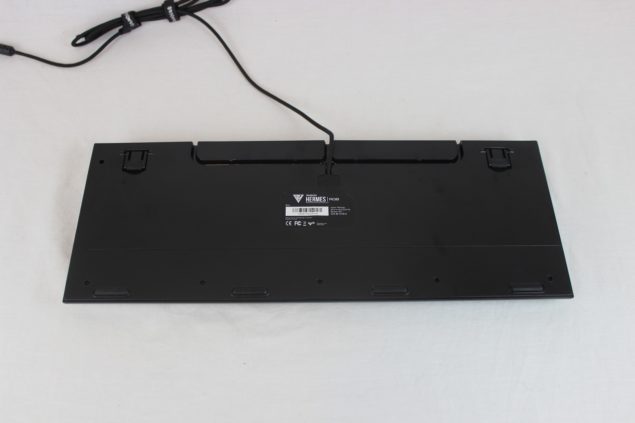 The Hera software is extremely user friendly needing very little time to have the keyboard set to my liking.  While it doesn’t carry the extensive glam style of programmability that something like the Corsair K70 RGB can do it is able to allow for you to create up to 6 profiles to the color layout and combination that you want without having to attend a class and read a textbook to setup on your own.

Check the video for a demo of the various lighting combinations that are possible with this keyboard.

I sat down to start this review not expecting to be impressed as I’m not really concerned with RGB and the flashy side of things, but after a couple weeks with this keyboard and having setup several profiles for the games that I play so that only the buttons I need light up, and seeing my cat mesmerized by the rainbow wave I have a different opinion on the matter.  It’s not the flash or the near endless color selection that has kept this keyboard on my desk after I finished taking all the notes for this review, but the comfort.  The Kailh Blue switches are very light to the touch as one would expect from blues, not nearly as hard to type on long sessions as my MX Blacks nor as light as my TTC Reds that I end up making exorbitant amounts of mistakes while plowing through a typing session.  The biggest drawback for this keyboard was the quality of a few of the keycaps, having to file down the burs off of a few keys is not something I would expect to have to do with a keyboard that broke past the $100 and lands at $129.  It’s not cheap, but for the feature set it’s right in line with what I would expect it to come in at.  A solid keyboard that’s full featured, but doesn’t go overboard on the aesthetics or tacked on extras. 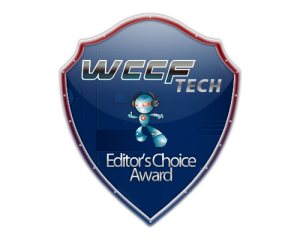