Double Peace opens up shortly after the events unfold from the first Gal*Gun title. The powers of a guardian angel that can help lonely souls find true love is treated as gossip between students, although none seem to know if it is true or not. As one of the more average students at his academy, apprentice angel Ekoro is tasked with helping the bumbling main character find true love through the use of a weapon akin to Cupid’s arrow. Unbeknownst to her, she accidentally boosts the power up to multiple times what should be humanely allowed and injects the protagonist with enough attractions that no one in town can lay their hands off of him.

As the main character, one ordinary school day turns into the creepiest form of being ‘Gods’ gift to women’. Students and teachers alike spend the school day lusting after the main character and literally throwing themselves at him to gain his affection. After dusk sets, the spell ends and so does Hodai’s charm. Hodai Kudoki expends all of his charm in that single day and will be unable to find true love for the rest of his life. So what’s a guy to do? Fend off every other overzealous (over 70 ladies stand between Hodai and true love) and settle down with the one girl he has his eyes on. 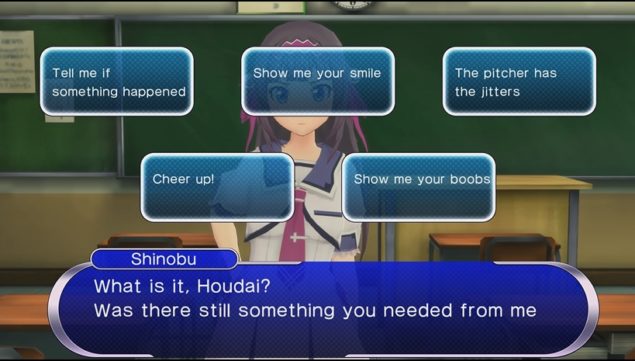 The first Gal*Gun on Playstation 3 offered the use of Playstation Move controls to treat the game as a traditional rail shooter. Sadly, Double Peace removed that functionality despite having a fully-operational gyroscope inside of the Playstation 4 controller. Without having proper motion controls and resorting to simply using the analog sticks for aiming, Double Peace’s gameplay ends up feeling much like the lackluster Rambo title that came out late into the Playstation 3’s life.

Story progression follows a similar path, regardless of which of the game’s two main ladies (sisters Maya and Shinobu) you select to chase after. After choosing between the two title characters (with more routes unlocked later on), players choose their personality type, made up of four primary stats that dictate what dialogue options are available to the player (and possibly which classmates will hunt you down). These stats are all fluid and can be raised/lowered depending on upgrades purchased at the sole store in the game or through which girls you use your special Pheromone Shot on. From there, each chapter gives the option of a few different routes to take, each with their own Requests that pop up through the in-game SMS service. These requests typically involve tracking down a specific item (and shooting it) which can be automatically turned in at the end of a level for a special currency. 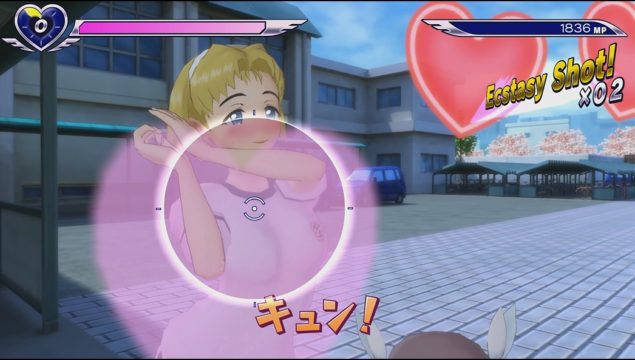 With a special Pheromone Shot, players can target multiple ladies in a single shot and subject them to a special scene where you attempt to raise their happiness through.. Various means. This is certainly as creepy as it sounds, as these scenes revolve around poking and rubbing your fellow classmates until their Doki Doki fills to full. Having trouble with reaching a certain spot? Purchase a different camera angle to get a better view. The reward for filling your classmates’ ecstasy meter is a shot of girls flashing the titular double peace sign, complete with the satisfied look of having one’s tongue hang out. Whichever classmates you initiate the Doki-Doki mode on can raise/lower the main character’s social stats accordingly.

Upgrades are handled through a school shop between levels, where the currency earned by completing requests and high score rankings can be spent on upgrading the player’s shooting prowess and other abilities. Having trouble staring at a girl’s hips long enough to get her measurements? Get an upgrade that speeds up the process. Taking too much damage when you get knocked over and a girl steps on you? There’s an upgrade for that too. These upgrades only last through the current playthrough, so there’s not a persistent upgrade that makes later routes that much easier. During my first run in Double Peace, I banked up all of the money I accumulated and kept donating them to the shop owner’s band fund, thus earning an extra ending with that particular girl. 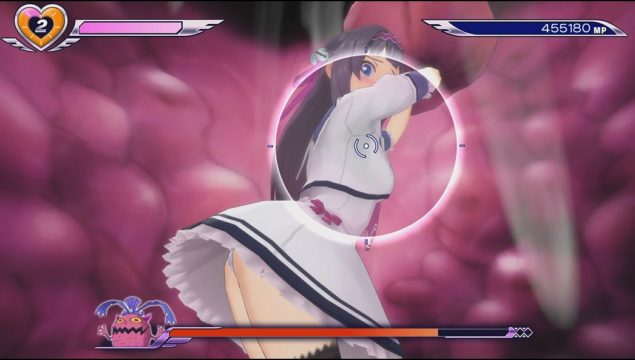 At key moments of each route mark boss encounters, each with their own signature gimmick. In one encounter, I had to aid older sister Shinobu from getting stuck in a window. This required a few sections of shooting away the negative feelings (literal angry faces) that cropped up around her body, followed by pushing/pulling/not-actually-dry-humping Shinobu by swiping up and down on the touchpad. While I would have preferred to take screenshots during some of the ‘boss fights’ to highlight the creepiness of these scenes, these were among the only moments that the PS4 share function was disabled, assuredly to prevent capturing one of the plethora of upskirt shots. 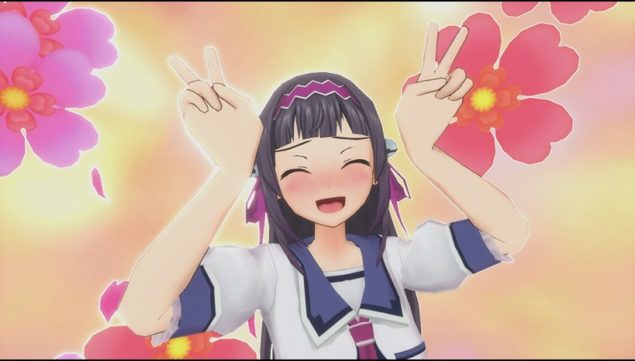 Gal*Gun Double Peace feels like a visual novel at its core with a mediocre rail shooter added in as a vehicle for the narrative. Between each encounter with a swarm of eligible schoolmates, the story is propelled through short conversations between a small number of story characters with little interaction from the player himself. The times that the game calls upon the player to give his own quips in the story are driven by whatever stats the player has built up. Without a sufficient Lewdness stat, some of the double entendre options might not be available to choose (depending on the character you’re aiming to romance, sometimes these can be the best option to choose).  Gal*Gun Double Peace is certainly a title that’s not for everyone, but if those titillating screenshots get your heart going ‘Doki-Doki,’ you’re exactly the kind of person that Double Peace was made for.

Gal*Gun Double Peace is certainly a title that’s not for everyone, but if those titulating screenshots get your heart going ‘doki-doki,’ you’re exactly the kind of person that Double Peace was made for.