Checking the map, I notice that Beta, although a strand of red rings, is quiet. I call to my team and three of us jump to our forward station while the other two hold the fort in Alpha. I strafe left, heading for the second mining station while my teammates successfully cap the first one. The fact that the sector is so eerily quiet worries me, but now is not the time for hesitation. Exiting the blue aura around the station, I head to the third, my teammates stalking confidently behind me. I glide into the station, maneuvering my ship as I set my sights on the final ring. Two red arrows suddenly flash up on my map and before I can react, a devastating array of bullets are hurtling towards me. The battle commences.

Free-to-play tactical space MOBA, Fractured Space, threw me into explosive space combat with gargantuan capital ships and a hand-picked crew that help me along the way. Although I’m not usually a fan of MOBAs, this one certainly demonstrated how much slower and strategic the genre can be and overall, I’m glad that I had the opportunity to experience it. With its large selection of attractive ships accompanied by various upgrades and skins, players will definitely struggle to choose what they want to spend their credits on. Although F2P, everything in-game can eventually be acquired by everyone and loot crates also drop daily after players complete two (bronze), four (silver) and six (gold) games, giving players more of an incentive to play regularly. 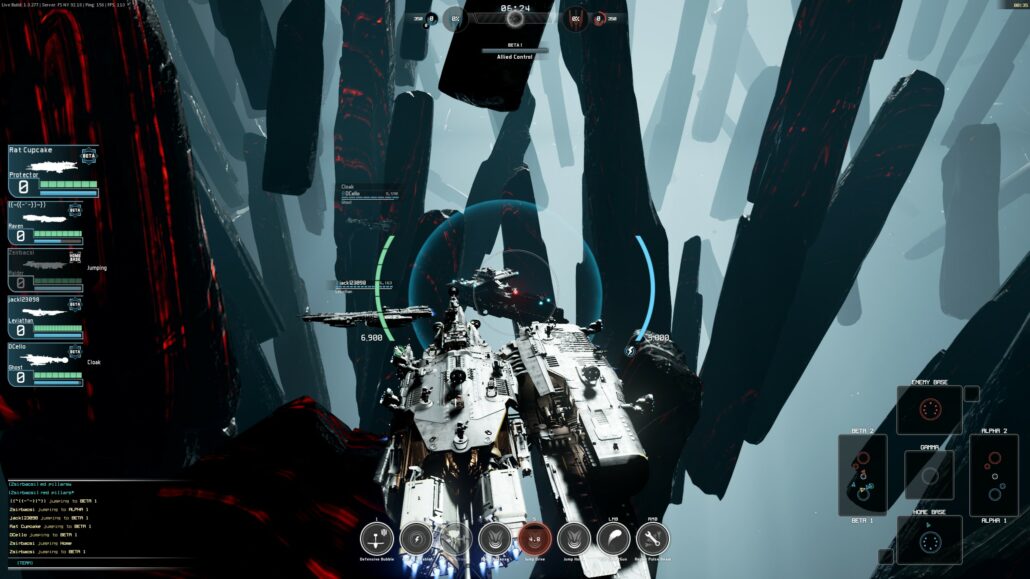 Currently sporting two modes, Fractured Space effectively offers players both a normal and short version of a match. It’s classic mode, ‘Conquest’, facilitates two teams battling across two sectors (Alpha and Beta) where they will need to capture mining stations and infiltrate the enemy base in order to win. There is also a third sector (Gamma) which becomes available periodically and rewards the team that secures it with stat buffs. These buffs are instrumental in leading your team to victory, so be sure to keep one eye on the clock as it counts down to this sector unlocking. It’s very likely that the enemy team is also preparing to pounce. The second mode, ‘Frontline’, is rumored to be a much faster version of the game, limited to one sector with a random selection of ships and a Sudden Death mode that activates after twelve minutes. I say ‘rumoured’ as I was unable to jump into this mode, despite attempting to queue for it on a number of occasions. Sadly, it appears that very few people are willing to try this mode, despite the update that has been applied to it in the recent Phase 1.5 patch. What’s more, this mode doesn’t unlock until you reach level eight so it’s a shame that more players haven’t gravitated towards it as in theory, it sounds like the perfect way to enjoy Fractured Space in quick action-packed bursts.

Whilst on the subject of long queue times, it's important to note that if you are interested in picking up Fractured Space, you’ll have to wait a while to find a game. After a substantial number of hours played, I would say that my average queue time per match hovered around two and a half minutes, with extreme cases nearing closer to double that. This is obviously through no fault of Edge Case Games or their game however, I can see how this would deter new players from wanting to climb aboard. The lack of people currently playing Fractured Space was particularly apparent when I found myself being matched with the same people a few times in a row, despite there being a considerable discrepancy in our ranks. In addition, playing casual mode feels like quite a long slog. This appears to be mainly due to the long breaks between games while searching to find other players, although I think that much like any online multiplayer game, if you have the opportunity to queue with a team the overall experience would feel far more enjoyable. 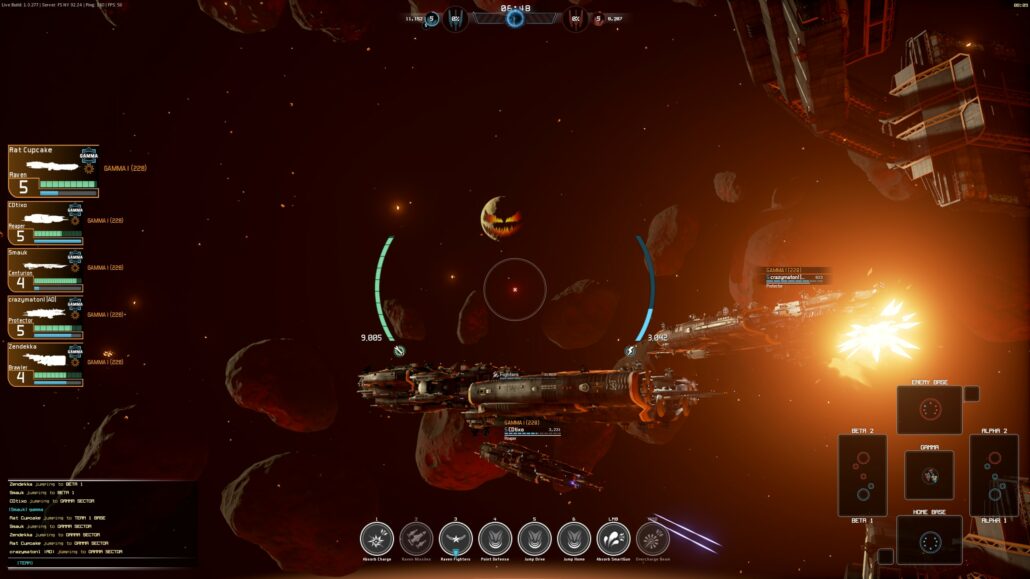 It may seem like common sense at this point, but I cannot stress how integral teamwork is in Fractured Space, with regards to both winning and actually enjoying the game. If you choose to drift around on your own, you’ll be picked off by the opposing team very quickly. It’s also important to note that captures are far more valuable than kills. Sure, racking up kills will buy your team some time to instigate an attack, but capping stations in order to access the enemy base and dominating the Gamma sector will win the game. Capturing mining stations/bases rewards your team with resource points, which are then used to upgrade your ship over the course of the match.

From my experience with the game, the community appears to be reasonably friendly albeit, quieter than I would have expected for this type of game. Many games played out in silence, with the odd request for help from a team member caught in an ambush. Although purely text-based, the team chat is sufficient for communicating with the rest of your team. Nonetheless, the option to use a microphone would be a welcome addition in the future and will be particularly useful in the ranked mode, when it eventually drops. The more memorable occurrences (although less frequent), were when I encountered the two extremes of the friendly and helpful players along with the aggressive and bitter ones. However, as I mentioned before, playing with friends or, even grouping up with other friendly players will most definitely provide you with a more fulfilling experience.

Fractured Space is a nice addition to the MOBA genre and makes a few tweaks that are much appreciated. With a vast list of ships, upgrades and customizations it creates countless opportunities and strategies for its players. Incorporating crew members that can be swapped out with ease, the game encourages its players to improve as they play, learning valuable information on the battlefield. Visually the game looks fantastic, with each ship showcasing a remarkable amount of detail as they majestically glide across attractive landscapes. Sadly, progression currently feels quite slow and this, combined with the lack of active players could deter those that have recently joined from sticking around. Although the game has the potential to be really fun for a group to play, I didn’t have as much fun as I had hoped and I have no inclination to continue playing on my own. Nonetheless, if you have some time, a lot of patience and a few friends, Fractured Space is well worth a try.