It's a well established fact that when the aliens finally invade, they'll come equipped with hub cap flying saucers, nuts and bolts robots and jars of green ooze. It'll look like something out of a failed episode of Robot Wars, and plucky mankind will beat them using a stiff upper lip and our natural born determination to survive. Personally I can't wait, if only because it'll help sales of my massively underrated theremin Queen cover album. Before The Blob and his mates attack, though, we have games like Fortified.

Fortified is a third person action tower defense game. Like almost all games in the genre, it excels as neither. The tower defense doesn't get a chance to become especially in-depth, because it's nearly impossible to command your structures from a third person perspective, while the action is as much ruled by health bars and blanket shots than any specific skill on the part of the player. 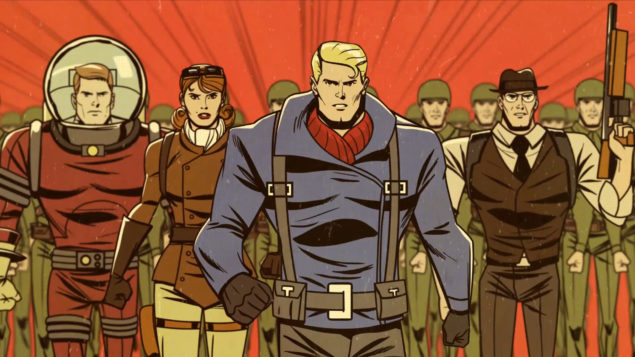 But despite the shortcoming attached with forcing any two styles of gameplay together, Fortified is still good fun. That's because what it does, it does very, very well. This is a title that's seeping in atmosphere. While it's a shallow in terms of plot, the creatures, soundtrack and characters are an absolute joy to see.

Your goal is to defend your rocket. Simple, right?

Playing as one of four characters - each with their own unique skills, placements and weaponry - you'll take on the might of the Martians, from tiny metal spiders to deadly UFOs. Place your soldiers, structures or traps and then start the wave, taking out as many opponents as you can while they head towards your tower.

This starts out relatively simple. One rocket, one direction from which the enemies will come. There won't be much in the way of speed, just a march of metal zombies walking relatively slowly towards you. What's surprising is how quickly you can lose control, even on these earlier levels, and you have to learn quickly where your priorities should lie.

As you progress, things become far more complicated. Enemies get more powerful or can roll right past your defenses. Maps become like mazes, with shortcuts and multiple rockets to defend. Even the levels themselves become longer, as more and more waves line-up to attack.

It's not packed with originality and in fact, if you've ever played any other game in this genre before, it'll feel very familiar with little to no time played. 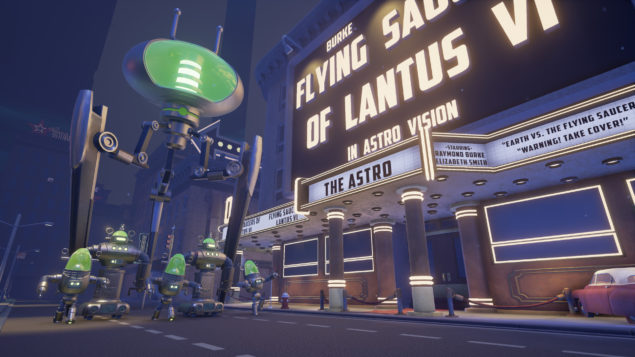 What it lacks in freshness, Fortified makes up for in good design. This game is so likable because it successfully recreates a certain B-movie feel, something which I guess is considered too cheesy to really visit in games and films elsewhere. If you've ever seen Tim Burton's Mars Attacks, that's the sort of thing we have going on here. The creatures and robots that attack could easily be out of some vague horror sci-fi classic, seen by three men and a dog in 1962. It's like the results of the design team for classic Doctor Who going on a shopping spree through B&Q.

This stretches to every other area of the art as well. Buildings are right out of a 50s comic book, right down to the oversized neon signs. Oddly nostalgic cars litter the street, abandoned by people no doubt wearing trilby hats and using gee whizz as an expression of surprise.

The music does its job, but never really seems to fit the sci-fi theme. It feels more like a modern genre score than the full cheesy X-Files theme style, synthesizer led tunes you might expect. It's wrong to criticize something based wholly on your expectations, but this is the one area of the design that feels less than you'd expect.

There are more than 10 levels, available to each of the different types of character. That's a relatively large amount of playtime and quite clever considering the fact that, although you'll be replaying different levels, your strategy will vary depending who you use. From the rocket scientist to the marine captain, the differences really are enough to make you shift your play style.

As you play, you'll level up the character you're playing as, unlocking more weapons and equipment. I found that these reward you for not experimenting. I found that an upgraded shotgun - the first weapon you unlock as the captain, was more or less way better than anything else you get as you play on. It was only when I looked back at the armory that I realized how little I'd used his alternatives. They just didn't pack the same punch. 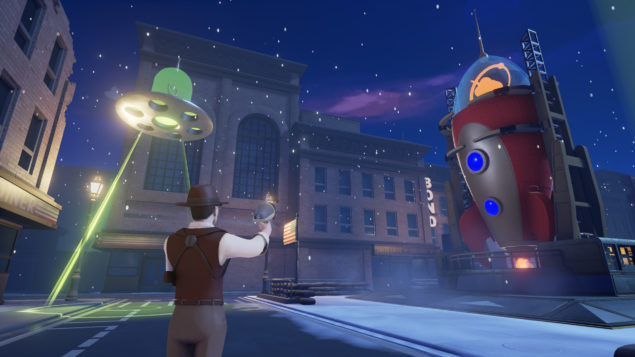 While not all weapons are created equally, the same can be said for soldiers/structures. You'll definitely fall into the habit of trying to use the same sort of thing in each level and for the most part it'll succeed or fail based on how well you play your cards. Of course, better structures and soldiers cost more, and you only have a limited amount of money per round, which at least provides a certain amount of balance.

Why play alone when you can team up with friends? Fortified boasts a four player co-op mode, and the ability to join public games online. I've had no luck with it, but then I don't have people to play with. Playing with friends, online, with microphones, makes almost every experience better, so this is definitely an option if you fancy something after the Orcs Must Die series. Just don't come into it expecting to meet people online.

Fortified is a bit of good fun. Don't take it too seriously and you'll find an enjoyable few hours worth of gameplay at least. Granted, it doesn't do anything to get out of the rut of the combined genre, but the design at least helps it stand out.

At full price, I'd say it's a little expensive, but mileage there will vary based on how much you value your hard earned and how much you play it. With that said, I can foresee a lot of happy people when the next big Steam sale rolls by and they pick up a B-Movie bargain.