Fate Extella: The Umbral Star Review – That Caster Came From the Moon

Type-Moon’s Fate series has become a recent phenomenon across both animation and video games. Historical (and fantasy) heroes of old are brought together to fight each other to the death over a supernatural force known as the Holy Grail. Through its many renditions in video game form, the series began as a visual novel and was transformed into mobile games, role-playing games, and its most recent rendition, an action title in the same vein as Dynasty Warriors. Following up the PSP-exclusive Fate Extra title, Type-Moon and Xseed’s newest entry in the Fate universe, Fate Extella: The Umbral Star brings that one-man-army style action exclusively onto the PlayStation platform.

As someone whose experience with Saber has been in crossover fighting games and a pair of Fate Stay Night anime (Unlimited Blade Works and Fate Zero), the story behind Fate Extella: The Umbral Star made some sense although I continuously thought that I was missing some key plot points. While not explicitly mentioned to the player before starting up Extella, it becomes obvious as the story goes on that this is a follow up to the PSP role-playing game, Fate Extra.

By the time Fate Extella starts up, Fate Extra had already concluded and with it, the Moon Grail War’s victors decided. The key Servants, Saber (Nero Claudius Caesar Augustus Germanicus) and Caster (Tamamo-no-Mae), return as the main routes for players to undertake in Fate Extella. Each route will need to be completed in sequential order, forcing players to take control of Nero and her generals and securing a final victory before another playable character can be selected. 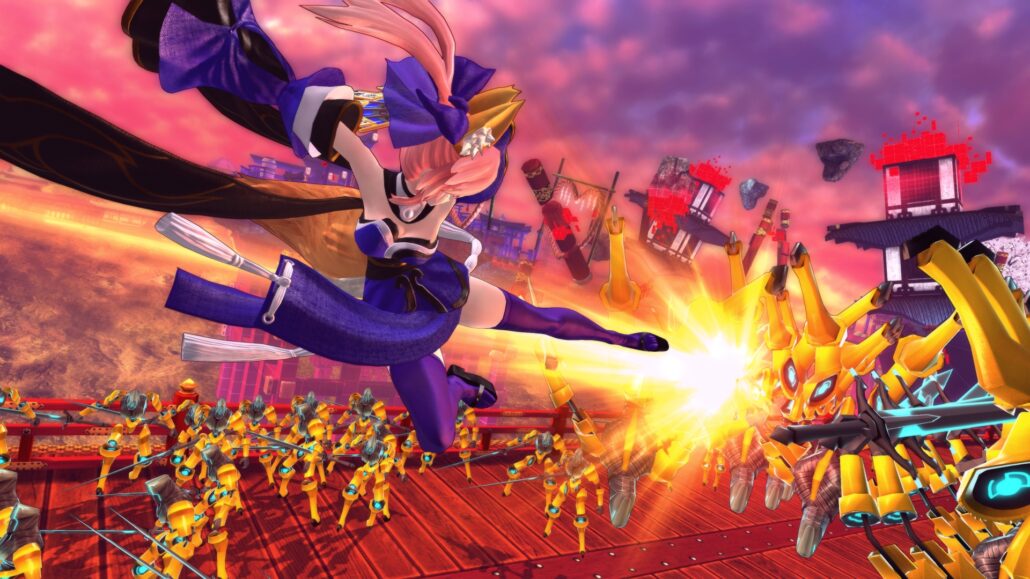 True to the Fate canon, these Servants can’t exist without having a Master to control and guide their fate. As such, the main character has had their physical body separated into multiple parts, mind and body split apart and each taking their own form as Master to control their particular Servant. It was a novel story hook that justified how and why each Servant was being controlled by an identical character and gave the story direction to try and unite these splintered forms back into one body.

In each route, players take control of that particular Servant through a small number of battles (typically around a half dozen) to secure their victory and reunite the player into one body. When not in combat, the story is told through visual novel segments and the occasional cutscene when one character squares off against another.

The aptly named ‘My Room’ is where players can talk with their Servants to gain affection/Bond between chapters and helps to flesh out the connection between player and Servant, typically with humorous or innuendo-driven dialogue. This is also where the sole amount of character customization comes into play with the Mystic Code system.

Mystic Codes give each Servant a loadout of sorts of up to four varying abilities to use during combat. Typically these range from being able to swap back and forth with a sub character (in Saber’s case, this was Archer), healing items, or temporary status-boosting effects. Most of the Mystic Codes acquired were through purchasing at the shop in My Room or from routing enemy generals, although some can also be acquired through building up Bond levels with specific characters.

Those familiar with the Warriors’ series of games should be well aware of the sidemissions that can be selected before going into battle, giving a slight adjustment to the players’ tactics by requiring extra objectives to be completed. Each successful mission ranks up that given Servant’s Bond, so it’s important to take as many of these missions on whenever the opportunity arises. 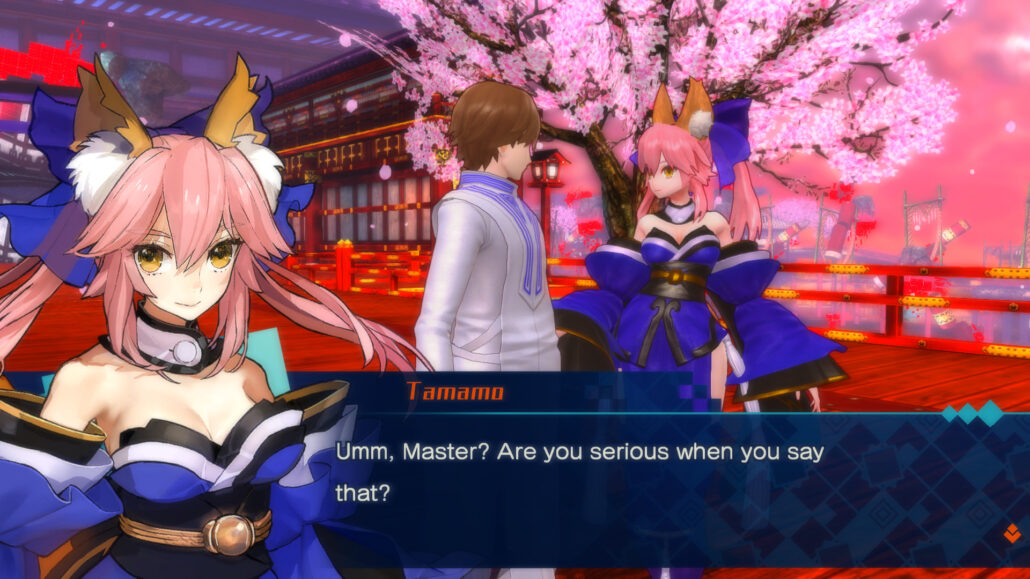 Battles in Fate Extella: The Umbral Star typically range around the twenty-minute mark. Through this time, you’ll constantly be running around the map from base to base, taking territory from the enemy or rushing back to defend a base that’s under attack (each given their own separate point value). As all of this is going on, a ‘Regime Matrix’ fills up between the two armies. The first team to fill out their Matrix ends up in a final showdown with generals facing against one another in armed combat. I hadn’t actually lost a match to date, although there were a number of times that I came incredibly close before sniping the final camp out under from the enemy’s nose.

Because of how the point system worked, I kept ignoring the bases worth only one or two points and instead went directly for the battlefields that’d tally up at least four points for my side. The final objective, typically a boss battle against the enemy Servant, would only appear once the player’s Regime Matrix as filled, providing an incentive to rush as quickly as possible and hope the enemy forces don’t attempt to route enough of your bases to take control.

When it comes down to the actual fighting, Fate Extella: The Umbral Star puts more focus on how smooth the battles run versus the actual flow and enjoyment of combat. Large, flashy combos work great to eliminate large groups of enemies at once, but the length of battles don’t work well in this title’s favor. There was a great amount of repetition to building up the player’s special ability, unleashing it against a group of enemies and seeing the same animation every time, and repeating the process against enemy generals that just soak up damage like a damp sponge. If the battles were finished in half the time, I could praise the combat system more. However, by the time each battleground was cleared in Saber’s favor, I had already grown tired of the gameplay loop.

Fate Extella: The Umbral Star is a great supplement to the Fate Extra story, and as such, it’s somewhat difficult to recommend without having played (or at least read) the previous game to understand what’s going on. If you’re willing to forego the story and just enjoy the action, Fate Extella is undoubtedly one of the smoothest playing Warriors-style games to date with kill counts ranging in the thousands for each battle. Repetition may set in early on, but by then you should be al lready to unleash your Noble Phantasm.

If you’re willing to forego the story and just enjoy the action, Fate Extella is undoubtedly one of the smoothest playing Warriors-style games to date with kill counts ranging in the thousands for each battle. Repetition may set in early on, but by then you should be all ready to unleash your Noble Phantasm.