Fallen Legion: Sins of an Empire Review – Settle It on the Battlefield

Fallen Legion: Sins of an Empire

Built from a pedigree of RPG veterans, Fallen Legion: Sins of an Empire is one-half of a two game story, with this particular release available exclusively on the PlayStation 4. If you’re handheld inclined, a second title called Fallen Legion: Flames of Rebellion is now available on the PlayStation Vita and tells a different tale set with the same battle system (from the other side of the conflict, in fact). 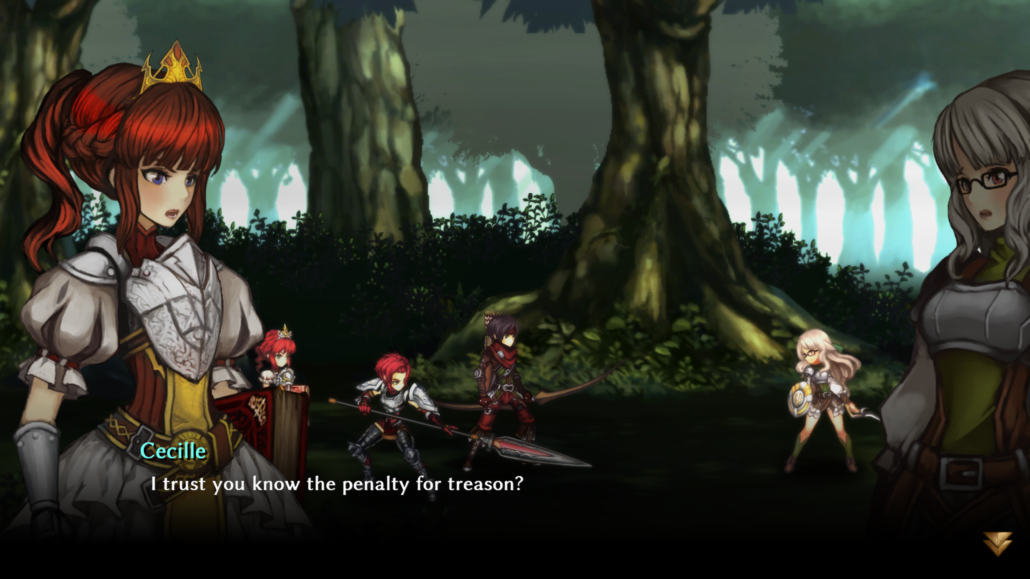 In Fallen Legion, the battlefield is where both rule and combat are conducted hand-in-hand. When not in the preparation phase, nearly every other moment in Fallen Legion is spent on the field of battle, whether it’s in a cutscene or actual combat. Accompanying a young Princess seeking to regain her kingdom are a number of Exemplars, powerful manner of folk that is the human embodiment of famous weapons of yore. Cecille is allowed to bring forth three into battle and it’s up to the player to decide which ones are brought along from a wide arrangement of attackers from hammer users to gunners and much more. It wouldn’t be too far-fetched to call them Cecille’s Einherjar if you will. 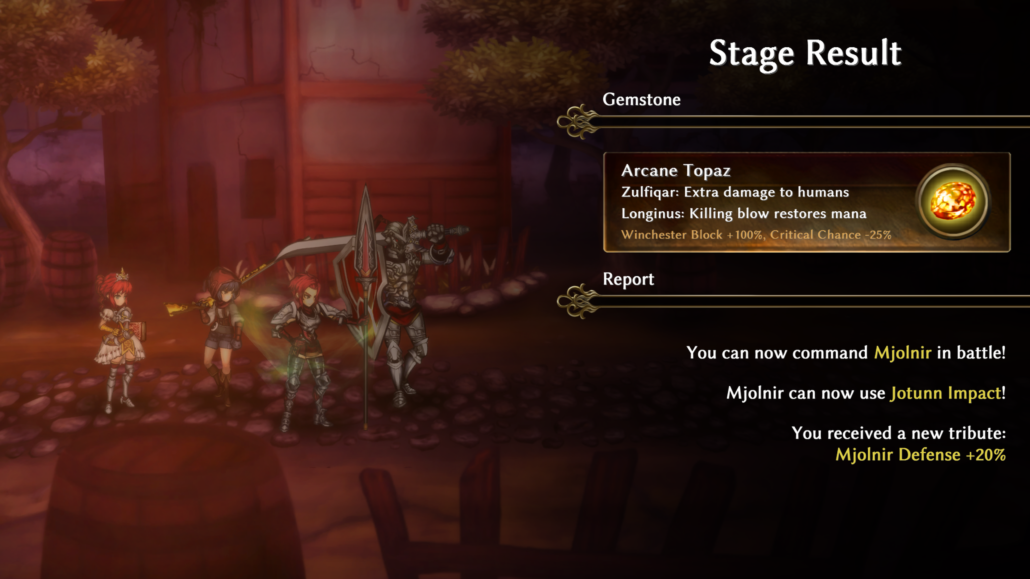 Fallen Legion: Sins of an Empire is perhaps about as streamlined of an RPG experience as you can get while still being called a role-playing game. Perhaps it would be better suited to call it more of an action title, as the Exemplars under Princess Cecille’s command don’t level up in a traditional sense. There are no levels or individual stats to micro manage in Fallen Legion: Sins of an Empire. Instead, Cecille can equip up to three gemstones that augment her Exemplar unit’s stats and can confer additional abilities such as replacing her basic magicks for something more suitable for the player’s style. The Exemplars themselves can grow by gaining new combo-ending attacks to add in another tactical layer to combat, but they themselves don’t have any individual stats for the player to admire (save for a generic effectiveness chart that shows their ranking across strength, speed, health, etc). 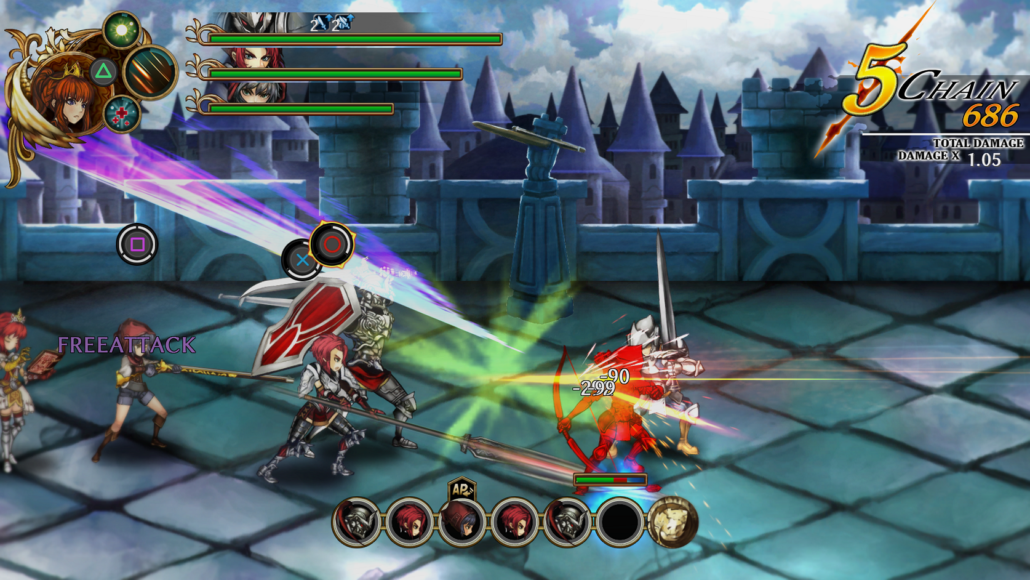 What players will be able to see and take advantage of are Tributes, both in the form of crystallized gemstones that confer a constant passive bonus and card Tributes conferred by mid-mission diplomatic options. As Cecille and her band of three Exemplars traverse laterally across the battlefield, occasionally there are occurrences that require her diplomatic oversight in order to progress. These typically range around minor goings-on throughout the kingdom, such as a peasant uprising or medical emergency. 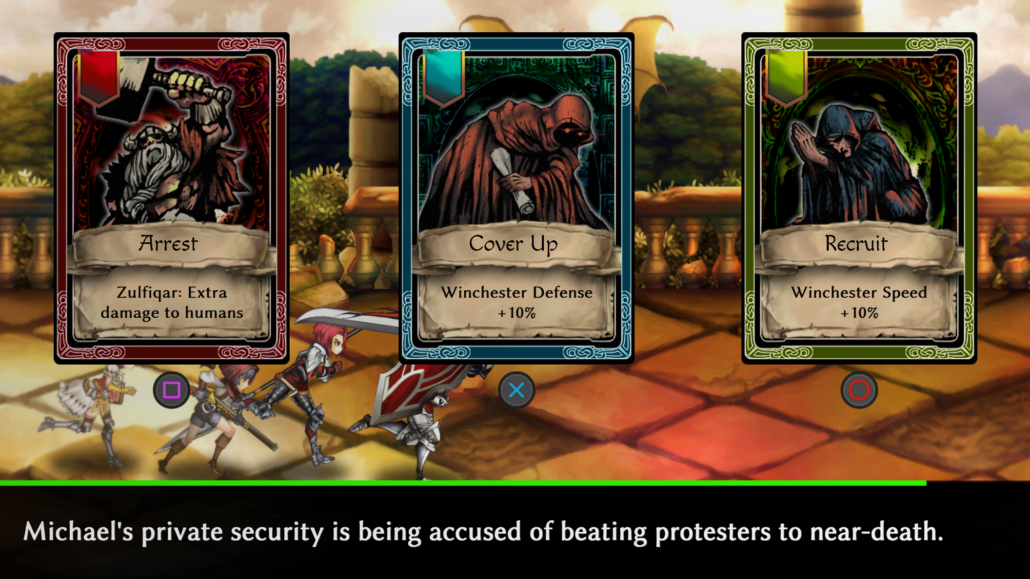 To quell these uprisings, Cecille is given three different outcomes, each with a brief effect that can affect the kingdom’s morale. From a gameplay standpoint, sometimes the player might not want to go with the most well-received option and perhaps offer to execute a traitor, rather than let them have a fair trial. The reason for this is because each option offers a different Tribute that can boost the combat effectiveness of Cecille’s team. These Tributes typically only affect a single party member for the remainder of combat, but ones that offer a free attack or double damage on the ability board are always worth picking up.

Praised as looking similar in mechanics to Valkyrie Profile, the combat to Fallen Legion: Sins of an Empire features a noticeably familiar style. I daresay that the team at YummyYummyTummy might have even dipped into the well of Indivisible with the combat flow. Each party member is given a small number of Ability Points that, when used, allows them to unleash a single attack against their foes in real-time combat. There’s no limit to who can be attacking at once, so players can send out all three attackers (plus Cecille’s magic) to press the advantage. There’s a bit of finesse required in the combat, as linking attacks together with proper timing can help unleash powerful Link Attacks that are unique to each Exemplar and far more beneficial than a standard sword slash. 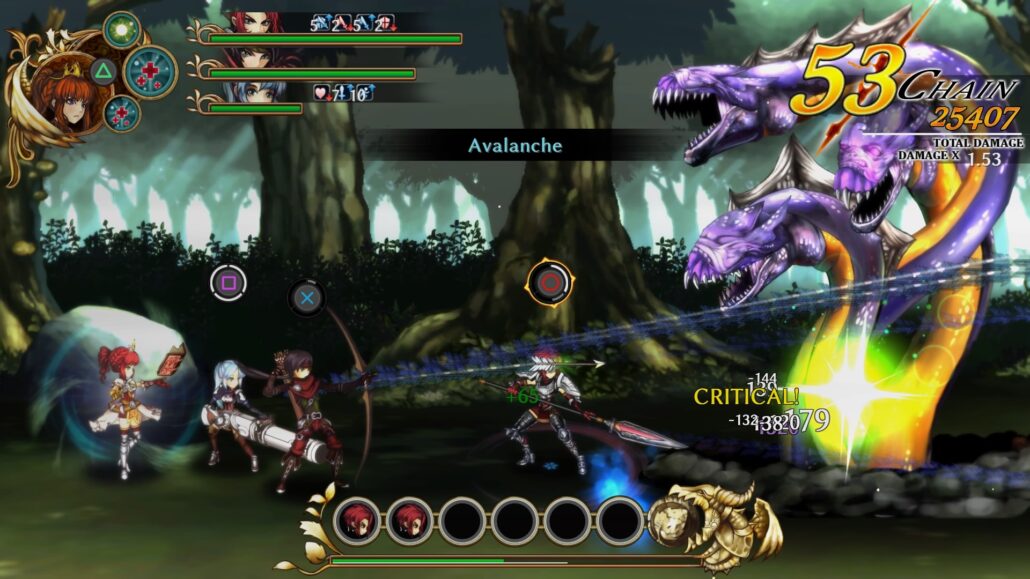 The biggest issue that I came across when mashing my way through combat in Fallen Legion before I got the hang of linking attacks together and conserving AP to maintain a high combo chain, was the feeling of being defenseless after an attack. Zulfiqar, my team’s first sword and shield user, felt like the best fit for being in front and taking hits as they came in, but if I pressed the advantage for too long or attacked when the enemy was preparing to do the same, I’d routinely find myself eating a faceful of monster fist and losing my combo chain. Because of this, I found myself typically having to end my flashy combos early and hold back to brace myself for the enemy’s attack and block accordingly.

Timing a perfect block can regenerate some of the team’s AP and give the opportunity to continue a combo chain without having to spend moments waiting for that meter slowly refill. If there’s ever a lull in the action and you’re forced to have to wait before you can act again, it is typically the result of bad reads. Holding down that block button prevents Cecille’s squad from regenerating their AP, so using that perfect block system is essential to getting through the later levels.

If it weren’t for the solid combat keeping the experience together, Fallen Legion: Sins of an Empire fails to stand out in an ever-growing genre of action RPG’s that each build inspiration from Enix’s original Valkyrie Profile. The hand-drawn art looks impressive, but it’s presented across a series of battlefields that increasingly blend together as Cecille’s story goes on. Nevertheless, Fallen Legion: Sins of an Empire remains an enjoyable experience across its modest length and is a stand-out action RPG, even if it’s more action than RPG.

More action than RPG, Fallen Legion: Sins of an Empire focuses everything on the battlefield: story, character development, and the choices that will affect the entire kingdom. The unique take on ATB combat is perhaps Fallen Legion's greatest strength.