Exist Archive: The Other Side of the Sky Review – Divine Assault: Nibelung Crystalis!

Exist Archive: The Other Side of the Sky

What do a subway explosion, magical crystals, and an evil god voiced by none other than Dio Brando have in common? Exist Archive: The Other Side of the Sky, tri-Ace’s latest RPG might hold those answers and more. With more than some subtle references to Valkyrie Profile in its gameplay and story, there are plenty of questions gamers might have. For those looking for a role-playing treat to enjoy before the local releases of Final Fantasy XV and Persona 5, is it worth checking to see if the sky is really bluer on the other side?

The narrative format to Exist Archive takes an approach that feels suited for a handheld game rather than an RPG made for consoles. With no true world map or even towns to visit, everything in Exist Archive is segmented into smaller chunks. From a central mission list, both story events and side quests can be selected in any order and repeatable (side quests, at least) with a recommended party level to succeed. For most of the game, with a little bit of early grinding and use of the game’s Bonus Gauge mechanics, I stayed largely ahead of the recommended curve. By the time I was taking on missions that recommended I be at least level 50, my main party was breaking the 100’s and standby characters were all in the mid-80’s. It’s worth noting that characters that don’t take part in battles still get a share of the experience and affection levels, albeit at a much lower rate.

Exist Archive’s battle system should feel right at home for those that have played at least one of the Valkyrie Profile titles. Both titles were developed by veteran team tri-Ace and their inspiration behind Lenneth’s tale carries forward into Kanata’s story. Each of the four party members is mapped to a face button on the Playstation controller and selecting one character makes them unleash one of their assigned attacks in proper turn order. While players can target a single enemy with the start of their attacks, most characters strike with sweeping attacks that hit any opponent in their range. Characters with long polearms or explosive ordinances work great to hit many a target at once. Mayura, the first Storm Mage that the party meets, is a starter of nearly every fight as the tornado that she can unleash brings together a large group of enemies and consolidates them together into an easy to strike cluster, perfect for the main character’s short sword swings. With a limited pool of AP that refills each turn, players can unless as many attacks as they see fit with the characters with each strike taking away a certain percentage of the AP pool. The only exception to this are Mage-class characters whom can typically only use one spell per turn and may have a two or three turn recovery rate before they can act again. 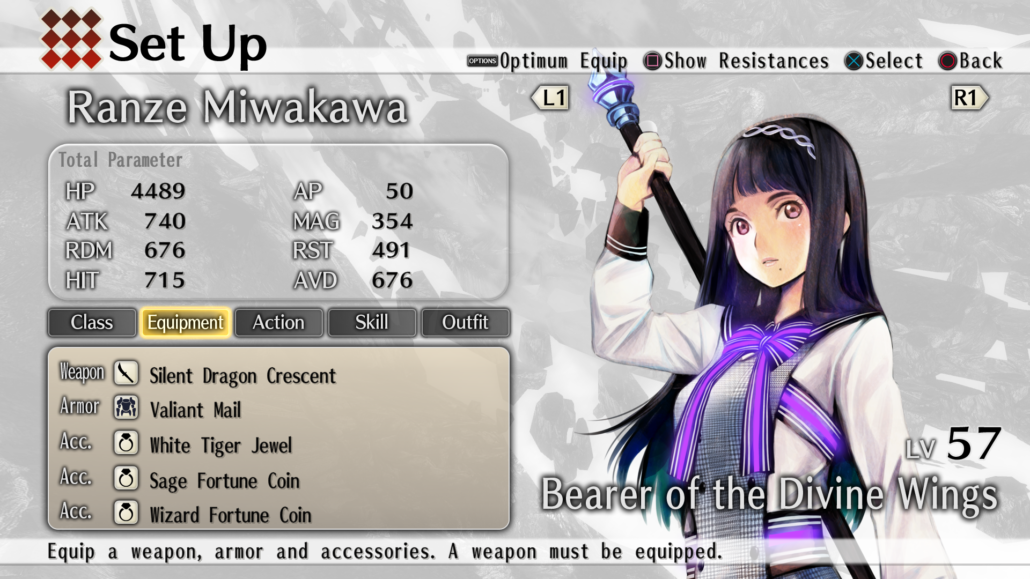 AP, or Action Points, should be a familiar mechanic brought forth from the Valkyrie Profile series. With AP being regenerated between each phase of combat (attacking and guarding), there’s a bit of a risk-reward system associated with being mindful of one’s points. Should the party go all out and try to take out the enemy during the first turn to prevent a counterattack, or should they take it easy and guard against the enemy party’s assault and start a new round with a fully stocked AP gauge and deliver twice as many attacks?

Typically the right answer is to strike the enemy without allowing a chance for retribution. A Bonus Gauge mechanic that’s become commonplace in tri-Ace RPG’s builds up with stylish combos but can be taken away in a single strike. The higher combos and juggling air strikes that the party performs, the higher rates of item drops and experience gains increase and carries forth between battles. Unfortunately, taking even a single enemy attack during the Guard Phase of battle has a chance of shattering the Bonus Gauge. I can’t begin to tell you how many times that I’ve guarded against one lone enemy enemy and still lost what bonuses I’ve saved up, even if that attack only hit the party for 1 single point of damage. 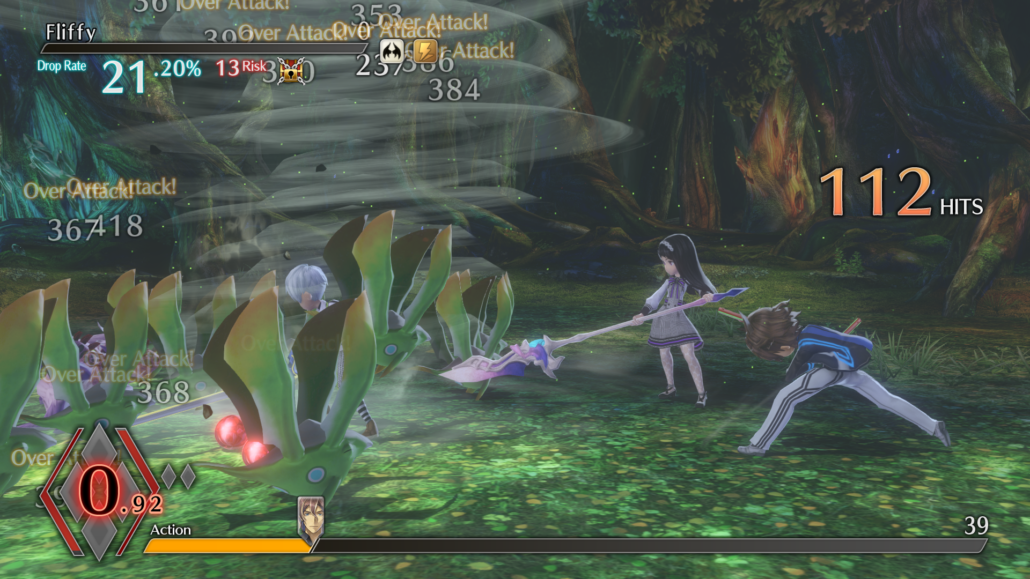 Exploring the 2D dungeons in Exist Archive feels like there are influences of the Metroidvania genre when it comes to navigation. Initially, Kanata can only perform a single jump along with a sword slash to attack enemies and gain the initiative. As the story progresses and more crystals are tendered to Amatsume, new abilities are unlocked to help cover more ground. Double jumps and ground slides are typically the first abilities unlocked in a modern Castlevania title and give reason to backtrack to previous areas. Exist Archive stays true to this formula and even adds in some unique skills that use fallen enemies as launching pads for higher jumps. With constant rewards given every time the player uncovers a dungeon map to completion, there’s always an incentive for returning back to a previous mission and searching out every nook and cranny.

The character designs are somewhat of a rough spot for Exist Archive in my opinion. Each of the various party members has their own color and style associated that help them stand out from one another with hand-drawn portraits. However, once another dimension is added to these characters and they are transformed into 3D models, much of that fidelity is lost. What the player is left with are a number of adolescent dolls that all gaze out with the same porcelain stare that I can only describe as unnerving.

If you’re deciding between getting Exist Archive: The Other Side of the Sky on either Playstation 4 or Playstation Vita, taking into performance is an important consideration. While the Playstation 4 release targets sixty frames per second, the Vita strives for roughly half that on a consistent basis. When the game isn’t performing its best on the handheld is in the midst of combat. When the game isn't hard crashing back to Vita's main menus (something that's happened five times, more than any other title I've reviewed on the handheld), there's some sloppiness mid-battle that always causes worry that the next crash is going to happen at any time. Even when tasked with only a small number of enemy combatants, some of the most stylish combos cause the game to dip into choppy territory with not only dropped frames but the occasional dropped combo. Powerful Demon’s Greed attacks occasionally drop with nothing to show for them, save for the wasted resources and energy. 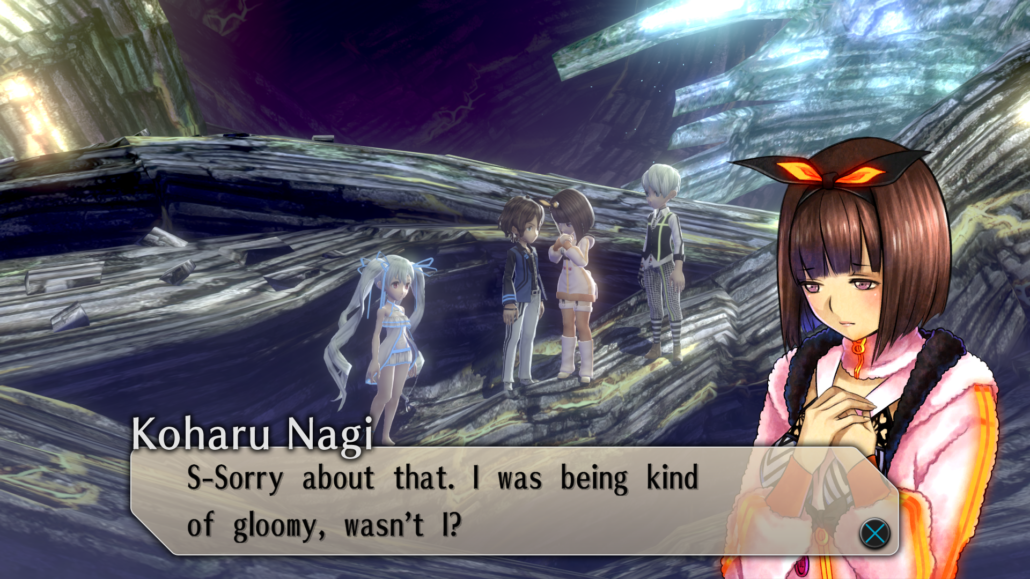 When Exist Archive works, I find myself enjoying it more and more. As the narrative progresses, new skills and abilities are unlocked with each crystal acquired. Before long I was finding myself constantly switching out party members to acquire unique skills depending on party makeup and trying out new strategies as I worked towards one of Exist Archive’s multiple endings.

Exist Archive: The Other Side of the Sky is full of surprises and rewards players for experimentation throughout its smaller segments. While it may not be the timeless classic that the original Valkyrie Profile strived to be so many years ago, Exist Archive takes that inspirational gameplay and infuses it with more modern tropes. Despite some rough edges with the portable version, it’s a classic role-playing adventure that deserves being noticed before it falls into the backlog archives.

While it may not be the timeless classic that the original Valkyrie Profile strived to be so many years ago, Exist Archive takes that inspirational gameplay and infuses it with more modern tropes.