The expansion pack, or DLC, as an idea doesn't generally evoke the same sort of confidence that it once has. The amount of content had decreased, and the perceived level of quality has even dwindled. At least it appears to be a forgotten art, but not all DLC or content updates are the same.

Endless Legend is already a fantastic quest-based 4X turn based strategy game, one that allows for the leveling up of hero's, hundreds of research opportunities, a wealth of customization options for your empire, and a very challenging AI. Not to mention the gloriously rendered combat that's entertaining to watch as it is to actually participate in. So what more could be added to an already fine game (metacritic gives it a rather high 82) such as this?

The possibilities inherent in the campaign are simply astounding, but perhaps one rather interesting element had been summarily missing since it's release, which has now been added; espionage. Also in the new expansion is a new faction, the Forgotten faction, who are supposed to be masters of spying and infiltration. They're a curious bunch, a group of what appear to be specters that merely float about the map, fluctuating between the living world, in and out of existence and completely invisible if the army is completely composed of the Forgotten.

They play completely different compared to what you might be used to. They don't research technology per-se, but instead have to buy it or, even better, steal it from your enemies. They're aggressive and powerful, and you have to play to their strengths to be successful, which is that of espionage. Because of the amount of Dust that they can acquire just by the act of pillaging, another new element, you might just find yourself pillaging the surrounding area's settlements even if they're neutral to friendly just because the payoff can be quite lucrative!

The last time that a well thought out hands off espionage experience really captured my attention quite like this was with Star Wars: Rebellion. In that, there was a real effect that could be has by sending in your best and brightest to invite riots and generally wreak mayhem from within. And similar to Star Wars: Rebellion, Endless Legend: Shadows let's you choose your most seating of heroes to get the job done right.

Espionage is a tricky thing to model inside of a video game. How does one make a system that’s both satisfying, interactive and able to provide some sort of substantial benefit to actually using it. Here we find our hero units occupied with other tasks if we wish to partake. And it’s they aren’t cheap to recruit, either. 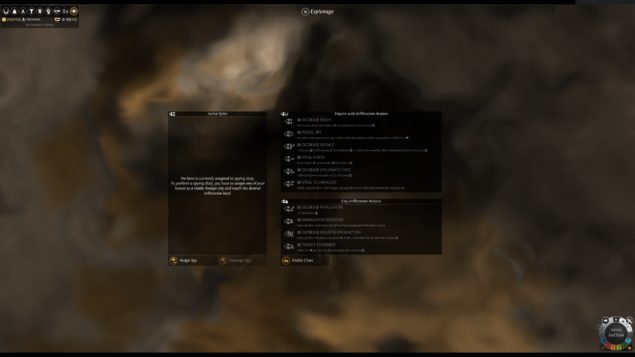 Initially you can't do much, and the screen looks like this.

How it works is actually quite a fluid experience, though. Heroes are assigned to their infiltration duties, being sent forth to spy on the opposing city of your choosing. They sit and wait there all the while gaining infiltration points that can later be spent on different actions that can gain you some very useful information. Even better is that you can help to secede these different towns and even cause a great deal of unrest, crippling their production. Though espionage takes up the full attention of your hero unit, quite the loss on the battlefield, the payoff in forestalling or even denying future conflicts is worth it. 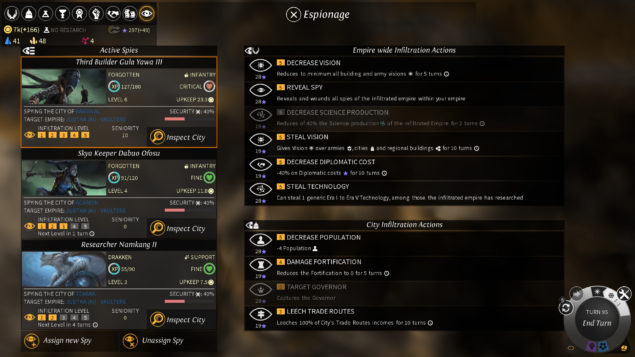 But then your options open up immensely.

The premise of setting up a sleeper agent, so to speak, inside the enemy empire and having them complete tasks later on is actually a great mechanic. It works well, very well in fact. They're always effective, too, in that any action you take and those infiltration points you spend, they'll always have some kind of impact, though there are always some kind of consequence associated to that as well. Sometimes that unintended consequence ends up severely pissing of your foes. In one particular case, just an uncovered sleeper agent ended up sparking a war I just couldn't win.

The new faction, and the new espionage system really brings an almost new take on the game. It's difficult at first to see anything different, as on the surface nothing really has changed. Enter a new game and not explore a little bit beyond the facade and you might miss it, but once you start actually delving deeper into the rich history and distinctive play style that the Forgotten bring, then the $12.99 doesn't seem so bad. This is especially so if you're already somewhat addicted to Endless Legend.