Empyre: Lords of the Sea Gates

If there's one thing that can be said for Empyre: Lords of the Sea, it's made me think of Waterworld. This isn't because of any similarity other than the fact that the world is flooded. That's exactly the case here in Empyre. Not to the extent of Waterworld, but enough that the surviving areas featured in the game are the top of skyscrapers.

Of course, being that the skyscrapers in New York City back in the early 1900's were only so high, if the tops have survived, a fair amount of land in the USA would still be above sea level. But let's not over think the setting too much. In reality, a flooded cityscape, where the tops of buildings had been linked together to found city-states is actually an incredibly interesting setting. Particularly in the case of Empyre as it features technologically advanced turn-of-century steampunk technology.

It's a shame, then, that Empyre doesn't utilize the setting to its advantage anywhere near enough. For the most part, everything is just there, for lack of a better word. There's no real sense of meaning to anything in Empyre's multiple city-states. The people are dull and lifeless, most not even having any fluff dialogue to add any depth to the world. Those that do have dialogue are quickly done with and you're left with little, if anything, to explore.

The little things you can interact with the world are basic at best. A lot are posters that reflect on the setting of the world. Your main quest in book one is to turn on the main water pipe to New York. As a result of the limited water, there is strict rationing in place. You'll see a few posters indicating this. You can also see a few wanted posters for sandhogs and other types (nationalities?) of people. Aside from a few small side conversations with select NPC's, there's very little background to the world that the game so obviously wants and needs to build up.

Indeed, I have a problem with the world building in general. In particular is the inconsistency of it. Empyre will accustom you to general RPG practices, like opening crates that are highlighted in the game for loot. However, whether a bug within the game or just bad game building, the game features countless items like chests and safes that can't be interacted with. It all contributes to the lifelessness that permeates the game.

Sadly, this extends to the characters you control. Any allusions to depth are quickly washed away due to the ham-handedness of the dialogue. For that matter, the story in general quickly damages the title. For example, you team up with a Sandhog, a vilified class of person to say the least. In one of the earlier areas, you aren't even given the option to tell one guard to bugger off when he says he'll let you keep a bribe if you let him kill your team member. Indeed, nothing is even said by any character and suddenly it's taken as granted you've agreed, the Sandhog leaves in a rage. Of course after knocking out the guard with one punch.

It makes no sense. Even though there's little dialogue between characters, you defend him and he defends you. Why, then, would you not just do what he actually does and knock the guard out and just leave? This ham-handed handling of characters actually features at the very start of the game. You're setting off on your journey so the quest dictates that you "say bye to your sister". There's no sense of emotion, no depth or gravitas. This continues with all dialogue throughout the game.

Indeed, the linearity of the title is one of the most disappointing aspects of it. Every now and then you're given a decision to make. For example, will you help break one gang of stereotypical mafioso out of the jail of another? It doesn't really matter because the end result is the same. Or, at least, there's nothing explained as to the consequences of your actions. Of the choices you are given, it can simply result in where exactly in a building you have a fight.

What can be said, at least, is that Combat is at least decent. Much like Dragon Age: Origins or Jagged Alliance: Back in Action, you can stop time to issue commands. These commands are then acted out in real time. Fortunately, the combat system is useful in that it allows you to pause and react to the flow of battle. It's particularly useful because the RNG in fights seems to hate me. Too often do I miss hits that are 80% or above chances of hitting. Enemies are surprisingly strong, meaning the ability to stop combat, cancel your current commands to swig down a health potion is great.

It doesn't help that the characters you control are switched and change without any decision making by yourself. A number of these characters are ill-suited towards battles, such as doctors, stealth-based thieves and their ilk. Primarily due to the up-front nature of the combat. Another aspect that works in your favor is the fact that characters don't die when dropping to zero health. They simply faint, only to recover shortly after and rejoin the fight. Other interesting aspects are the inclusion of terror and other psychological aspects. Some characters will run away when under a lot of pressure.

Sadly, even this functionality is limited. Too often have I found my orders not being actioned. The character stood still, taking hits, doing nothing in return. The order still visible in the queue at the bottom of the screen. It can be very frustrating when the game simply doesn't recognize the orders you're giving. This even applies outside of battle, where you'll click on an area of the map and nothing will happen. All you can do is simply try again. I did find some issues where to succeed in a battle you needed to get all of your characters to a particular area, only for the game to not realize that they were there.

Even aesthetically Empyre is a faulty title at best. The soundtrack feels like you're listening to the most generic and unoffensive easy listening album around. In addition, there's little ambiance and even in busier areas, there's no sense of bustle. There's just nothing memorable. Sadly, that much can't be said for other aspects.

I could have mentioned it during the story, but the writing is full of errors. From grammatical issues to outright incorrect use of terminology and words, it's very noticeable. On the other hand, I will say I did think that the UI was surprisingly good. Everything is shown with clarity and in fitting with the theme of the game. It's a shame that the visuals of the rest of the game are as bland and unoriginal as the music and story, featuring a host of reused assets.

From the concept, I really wanted to like Empyre. I was willing to give it as much of a chance as I could. Sadly, the further I went into the game and the longer I spent with it, the more bored and frustrated I got. Beyond the setting and the functionality of combat, I can't really recommend anything in Empyre. It's functional but limited and, sadly, boring. 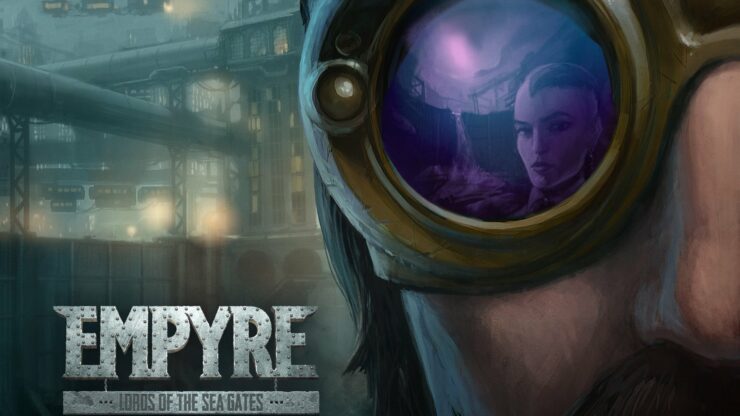 In addition to poor audio and visual qualities, including large re-use of assets, Empyre is let down by the poor world and character building. Sadly, I can't say much positive about the game, besides it having an interesting setting and a decent combat system, neither of which are used as well as they could be.