I think most lads of the millennial generation have wanted to throw a Kamehameha at some point in their lives. Dragon Ball was the ultimate power fantasy that featured way less spandex shots or crotches than WWE, but way more realistic looking punches that happened to shatter the sound barrier. As a result, it’s a dream of many to craft their own place in the Dragon Ball world; and that’s exactly what Xenoverse 2 aims to do. Almost exactly like Xenoverse 1. Which is exactly where the first issue arises…

What was a brilliant solution to the stalling storyline of Dragon Ball games is now suffering. In Xenoverse, the Dragon Ball timeline was being altered by mysterious new enemies, and in Xenoverse 2, the timeline is being altered by… Familiar enemies? Following on from Xenoverse, the Time Patrol charged with protecting Dragon Ball’s increasingly convoluted timeline (anyone keeping up with Dragon Ball Super can attest to that) has been expanded, along with the explorable Conton City, which is bigger and better than ever. What in Xenoverse served as a very simple hub-world feels so much more detailed and interesting – though, it is still a fairly simple hub-world, with all the same key buildings and shops, just spaced farther apart.

Unfortunately, that’s the main issue with Dragon Ball Xenoverse 2. It feels so very, very similar, and if you’ve played the first Xenoverse, it’s a hard sell unless you’re truly looking for more of the same.

In the story mode, the same situations arise; history has gone awry, and for some reason both Nappa and Vegeta – a pair of characters that never fight together, canonically – have both transformed into the Saiyan Oozaru form and you must help out Goku and crew, else they face destruction. This mission, including the area you fight in, is essentially lifted directly from the first game – the sense of dejavù is far too strong, and if you’ve played the first title, this incredibly similar mission – and the rest like it – are somewhat hard to stomach. 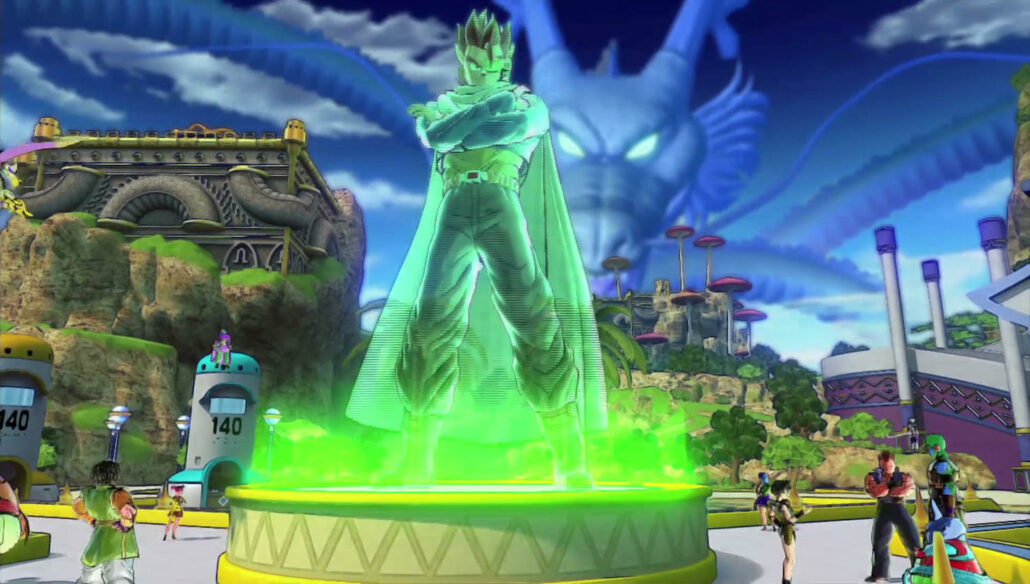 The main twist this time around is that time isn’t just being meddled with by a band of unrecognizable ne’er-do-wells, they’re now accompanied by villains taken from the history of Dragon Ball Z movies. Lord Slug, Turles, Cooler and a whole bunch of other movie villains make appearances both as playable characters, and actual plot-relevant characters. The main issue is that Dragon Ball Z movie villains are not memorable, perhaps with the exception of the I’m-strong-and-lack-a-personality Broly. There are many DBZ movies, but with the exception of the latest two, they’ve never actually been all that good, even with many die-hard fans considering them to be one of the weaker moments in the franchise.

And, as cool as it is for Turles to appear on Namek, powering up your rivals with fruit from his Tree of Might (from the DBZ movie, The Tree of Might) it feels very hollow, likely because it is just a minor variation on what we saw from them before with Xenoverse. Over and over again, it is hit home that Dragon Ball Xenoverse 2 is just more of the same.

Which wouldn’t be a problem, if Xenoverse was a better base game. Unfortunately, combat feels so very uninspired even by anime game standards, with the classic Square, Square, Square, Square, Triangle, Triangle, Special attack pattern wearing out its welcome before even a few missions are up. Ultimate Attacks and new Special Moves can be learned from Instructors – friendly and familiar warriors from the DBZ universe, such as Tien, Piccolo and Vegeta – and learning their moves is cool, though ultimately when one button combo can carry you through the entire game, even the training missions you perform become repetitive very quickly. It's worth fighting through them to earn moves such as Masenko and Galick Gun, but there’s just not enough variation in gameplay here.

The story fights are supplemented by plenty of side-quests you can pick up in Conton City by running around and talking to people. Saibamen might ask you to help kill Gohan, random NPC characters might want to train against you, or you may even need to fly around Namek picking up Dragon Balls. It’s a good thing these optional missions are here, as story missions require you to hit certain level caps before continuing – which doesn’t feel like anything but padding to stretch out the game’s length, honestly.

It says something that the main change I noticed in Dragon Ball Xenoverse 2 was stage destruction. Energy balls and ki blasts now carve chunks into mountainsides and into the ground, making throwing ki-blasts from a distance a much more entertaining and visually interesting feat than before - though, the holes close up again after about five seconds...

Above all else, if you’re to enjoy Dragon Ball Xenoverse 2 you’re going to have to get into the spirit of character customization. Character customization is at the heart of this game, just as it was in the original Xenoverse. I picked a Majin character for something fresh and built her for up-close fist fighting – though I couldn’t help but equip her with a few fan favorite ki-blasts. Using Skill Points to power up your character, and equipping them with various pieces of clothing drawn from the DB universe feels great, and has to be the most pleasing part of the game by far.

So, is Dragon Ball Xenoverse 2 a worthwhile purchase? If you haven’t played Xenoverse and you’re a Dragon Ball fan, then yes. This is a bigger and better version of its predecessor, the only real question is if you wish to play what is essentially still the same game. The story hasn’t really changed enough to make it essential – nor is the concept of time traveling interlopers as novel as the first time round. It’s a good game, just as Xenoverse was, but unlike then I can’t say Dragon Ball fans should play it without a caveat.

PlayStation 4 version tested (copy provided by the publisher). Also available on PC (Steam) and Xbox One.

Dragon Ball Xenoverse 2 is hard to recommend as it's so similar to the first, but if you're new to Xenoverse and a fan of Dragon Ball I can heartily endorse this game. If you've played the first, well... It's still good, just not really a must-have.