Cyberpunk is one of the cornerstones of the science fiction genre. Through television, books and film it has been the foundation of the dark, dystopian, industrial setting that is so influential in the genre. It has a created the intoxicating world of Blade Runner, and, in the gaming world, Deus Ex.

And although the black and gold stylized world of Deus Ex is an extremely popular title, the game was more or less alone in the cyberpunk genre on your favorite gaming platform. That is, until Dex, which creates a world filled with AI, shadowy corporations and people trapped in an unfeeling, uncaring system. It can feel a little closer to home.

From the very beginning of Dex you are dropped into a beautiful, brutal world. You will immediately fall in love with the style of the game. Like Blade Runner, Dex has a remarkable retro-futuristic feel. The graphics are a dark, perfect blend of pixel art and cityscapes. The whole game drips with style, and you’ll quickly find yourself itching to play. 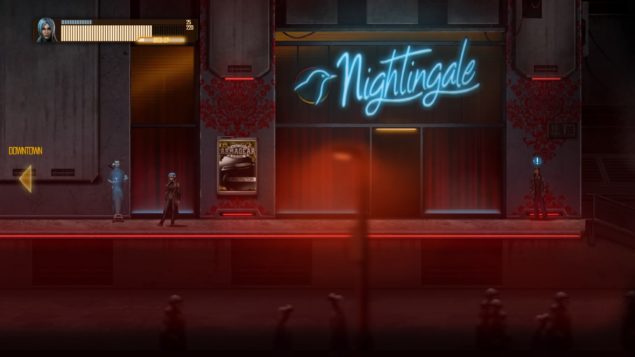 The gameplay, although not as strong as the art style, is solid and fun. Taking some cues from Deus Ex, you have a selection of skills, from charisma, hacking, melee and gunplay, with nearly free roam across the city to explore and exploit your skills. Hacking, charisma and lockpicking can all help you get a passive boost to combat, like better equipment or fewer enemies, or help you bypass the conflict entirely. Boosting melee on the other hand unlocks combos while you can also choose to take or give more damage as well.

Combat, in my case, was mostly a melee experience, and felt better for it. Having a gun with a few rounds was good as a last resort, but the combat was better up close and personal. The fighting almost reminds you of Streets of Rage, Golden Age and the other classic side scrolling arcade games. With two buttons to attack, as well as a dodge, block and duck mechanic. Enemies have to be approached in different manners. Big hulking thugs can’t be blocked, forcing the player to dodge around while smaller enemies can be blocked or dodged.

The dodge mechanic feels a little flimsy as your character launches much further than would be necessary, normally forcing you to wander back into the fight once the danger has passed. This and a few other little niggles don’t take away from the meaty scrappiness of fights in Dex, which are rewarding and fair. Unlike the classic arcade games, Dex is entirely on a single plane and multiple enemies pose a real risk, so learning your surrounding is vital. 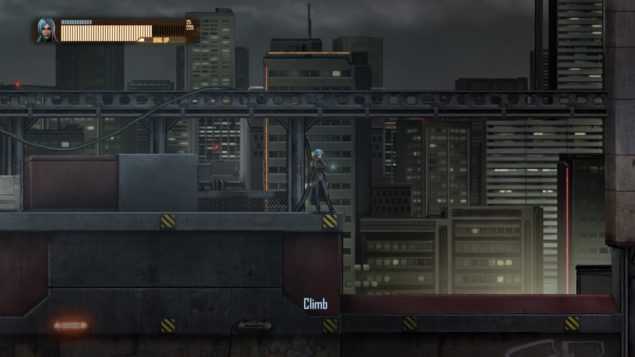 And the environments that you will meander and study are all are built rather inorganically. It somewhat detracts from the beautifully bleak world and atmosphere of the game when paths break up into multileveled platforming sections. Although it allows the player to explore the maps vertically, as well as avoid encounters discover secrets, it does take away a bit from the initial promise.

Luckily, the plotline is an amusingly cobbled together mishmash of all the genre favorites. From the self-aware AIs to the people hunting them, hackers and companies working from the shadows and a whole bunch of betrayal. Meeting new characters normally means pausing for a moment to work out which piece of science fiction their name homages. None of it is award winning stuff, but it’s a lot of fun.

What might just win an award though, is the voice acting. From an indie project the dialogue is incredible as you meet new characters and delve into the mystery of Dex. It’s a shame that only the cut scene dialogue of the central character is voiced, with the rest the oh-so-standard text boxes we’re all so used to.

With an enticing world, and good solid gameplay, fans of cyberpunk will enjoy this dark and gloomy romp. But fair-weather fans will have a lot to do in Dex as well, with quests and side quests, both offering a chance to explore and engage in the world. The map is somewhat cryptic, which can be frustrating when you’re given only the vaguest direction, but at least its another chance to explore. A lot of the time you’ll find yourself stumbling across the necessary location of NPC while off looking for something else. 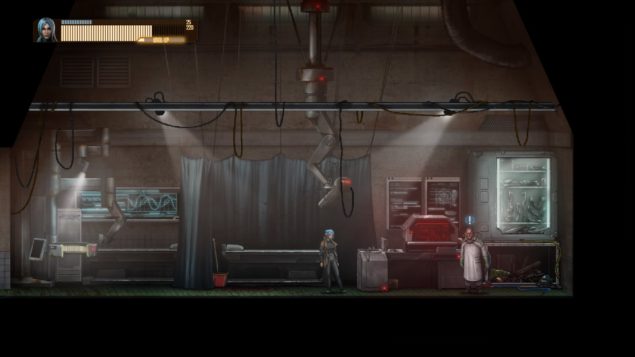 Dex is in no way perfect, and it's safe to say that nothing it does is flawless. Instructions are never as clear as they should be and the hacking minigame is a poor attempt at a twin stick shooter. But despite this, Dex is a lovely game to have a go at. You’ll find yourself stepping between nostalgic memories and new experiences, often at the same time. It's certainly nice that another game explores such an expressive and underused setting, and the plot, characters and gameplay all lend themselves to building a strong atmosphere to play with.

If you’re looking for something to hold you over until Deus Ex, or any other game with a streak of darkness through, Dex will keep you company.

Although a lot could be improved in Dex, nearly everything is good and solid. With the exception of the hacking, you'll have a lot of fun running and fighting your way across the map, even if you don't always know where you are and where you should be.