Previously a Kickstarter success story from 2014, Dead Synchronicity: Tomorrow Comes Today had been a PC-exclusive. In the same vein as LucasArts classics The Secret of Monkey Island and Grim Fandango, this was a rare new entry into the point-and-click style of adventure. Just in time for Halloween, Dead Synchronicity makes its way to the Playstation 4 with a gruesome style and puzzling gameplay.

Dead Synchronicity’s macabre setting and method of storytelling give it a style that stands out compared to contemporaries in the genre. However, that desolation may not sit well with fans of the adventure genre. Routine depictions of violence, conversations of sexual assault and murder are now a part of the world that’s been so wracked with a worldwide phenomena known as The Great Wave.

It’s not simply in the visual setting or dialogue that these themes come up. The core of Dead Synchronicity’s gameplay and puzzles courts these mature themes in nearly every aspect. For example, one puzzle involved picking a fight with a pair of trigger-happy peacekeepers and subsequently losing that fight. Your reward? The flashlight they bludgeoned the main character with and a broken tooth that’s later used in another puzzle.

On the other hand, it’s this fascination with the macabre that gives Dead Synchronicity a unique charm. So few gaming experiences reference these darker themes and even fewer incorporate them into every aspect of game design. Without a tough stomach for gore and the violence that accompanies it, it’s tough to recommend Tomorrow Comes Today even for seasoned veterans of the genre. By focusing less on the specifics of the world and more on a desire to explore more of this Kafkaesque fever dream, I was able to enjoy the narrative enough to see it through to completion.

Dead Synchronicity’s narrative starts strong as it builds a world ravaged by an apocalyptic event whose citizens are still trying to adjust to life in a new world without the use of modern technology and conveniences. This world building gives life to the various characters and each continued visit to the major players in the story help build motivation and sometimes trust. As the narrative progresses, the emphasis on character development, save for the main character himself, slips away as the puzzles become more obtuse and mind-bending. 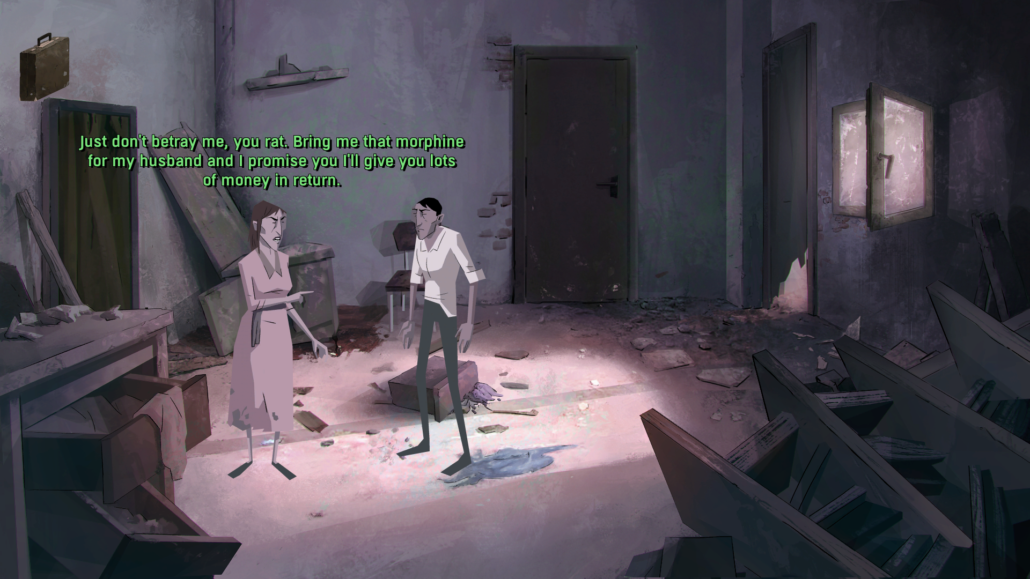 It’s this extreme take in puzzle direction that can make Dead Synchronicity such a tough sell for anyone that isn’t a veteran of the abstract thinking demanded by the genre. The old King’s Quest mentality of interacting with every object you can anytime a new item is added to your inventory certainly holds true in 2016. All too often, I’d find myself bashing my head against a wall at times when I couldn’t understand the correlation between two seemingly unrelated objects and how they would work together in a solution. Who would’ve guessed that a tooth fragment would be the perfect tool for keeping the back of a dusty old 35mm camera clipped shut?

All of this work on world-building and giving Michael believable interactions with its citizens ultimately fails to reach a meaningful resolution by the time the credits roll. The last few moments in Dead Synchronicity feel just as rushed as in the original PC release and some themes are presented to the player but never truly acted upon. A supernatural element crops up during a single puzzle then is hastily discarded to suit the narrative. While I felt this moment is a tease for what might come in future episodes, its placement didn’t feel organic to the story being told in Tomorrow Comes Today. 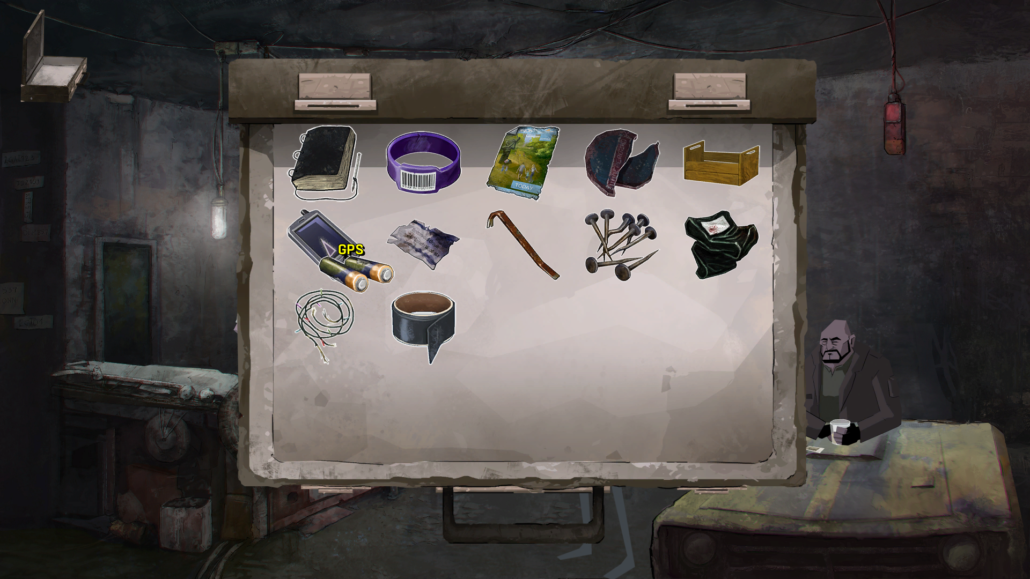 The updated console release of Dead Synchronicity: Tomorrow Comes Today provides some novel ease of use features, but little else beyond the PC release from 2015. Being able to highlight interactive objects in the scene was a feature that I found to be quite helpful during my time with The Book of Unwritten Tales 2 and I’m glad to see it become a norm of adventure games on the console. Without the precision of a mouse finding different items to interact with can be a chore, especially with objects occasionally being only a few pixels apart from one another. The convenience of being able to swap between interactive objects in the environment is a welcome change when experimenting with obtuse item combinations.

Dead Synchronicity features a lower budget style that works well for the story being told. Important narrative scenes are presented in a comic book like fashion with still images intermittently becoming more animated as the action ensues. Dialogues are instead conducted in engine with the occasional multiple options being presented to the player to ask questions or shift the conversation in a different direction. Tomorrow Comes Today includes both German and English voice-overs and while the English dub is serviceable, there’s a lack of professional delivery behind the characters that makes some scenes a bit awkward to watch play out. Protagonist Michael’s vocal delivery frequently comes across as sounding confused and monotone, even in moments of shock and terror. 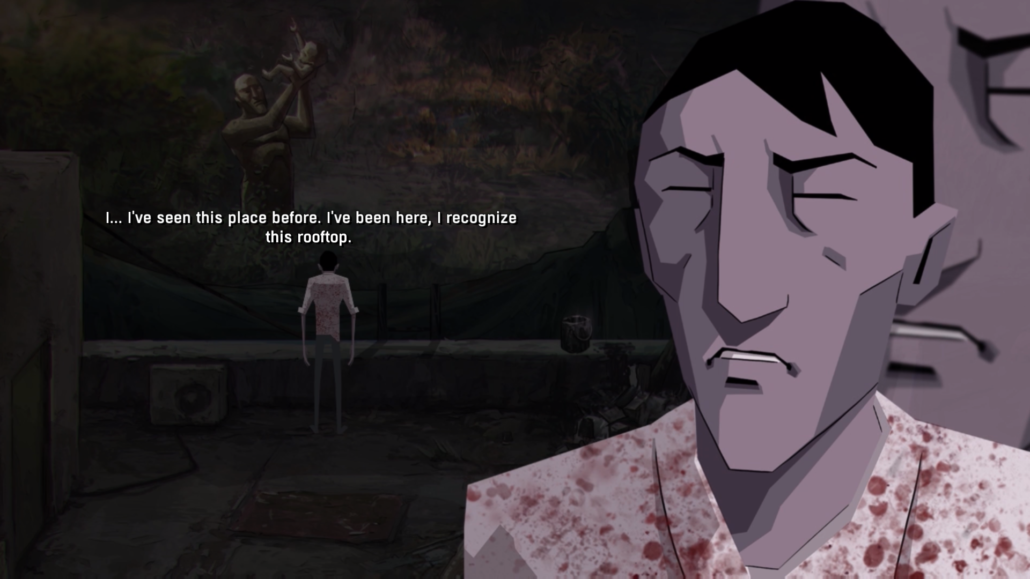 With the recent renaissance of point-and-click adventure games over the past few years, Dead Synchronicity felt right at home on the PC. That transition over to a controller doesn’t always work as well as intended, but developer Fictiorama Studios have brought over a fine example of how to make the genre work on the PlayStation 4. Even if Dead Synchronicity is only for those with an iron constitution and immune to the horrors of living in a world struggling after the apocalypse, it’s worthy of being a notable title for those looking to give their temporal lobes a workout.

Dead Synchronicity: Tomorrow Comes Today's emphasis on horror and trauma will stick with players long after the (abrupt) end.