Darkwood aims to put the “survival” in survival horror. Most classic examples of the genre – your Resident Evils and Silent Hills – are just action-adventure games with a creepy edge and limited health and ammo. Darkwood, on the other hand, attempts to deliver scares and a full-on survival experience along the lines of games like Don’t Starve. It’s a noble experiment, but does true survival horror actually work?

The game’s dedicated fanbase will certainly tell you it does. Darkwood has been available via Steam Early Access since 2014, attracting a small, yet passionate following, but will the game's full release appeal to a wider audience? Is Darkwood something more mainstream horror fans need to check out? Grab your flashlight, it’s time to head into the woods. 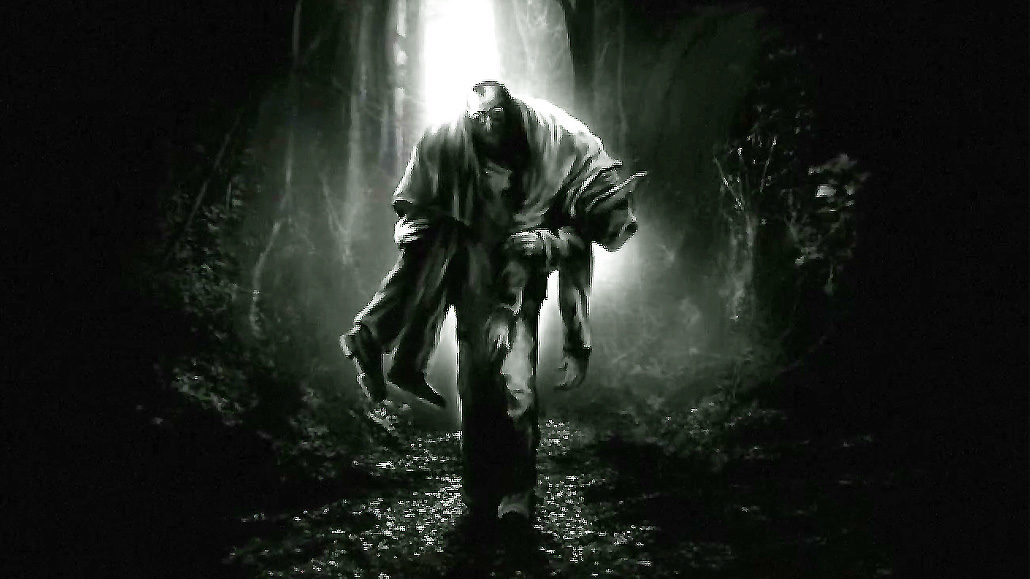 Darkwood initially casts the player as a man simply known as the Doctor, but quickly switches perspectives, putting you in command of one of the Doc’s unnamed victims. You manage to escape the Doctor, but not before he steals a large, rather important-looking key from you. You play through the rest of the game as this nameless protagonist, who spends a good chunk of the story trying to get that key back. Our hero (that term is used loosely) has lost most of his memories, but he knows the key is crucial to escaping the twisted forest he finds himself stranded in.

Most survival games would just leave it there – you’ve got your basic setup, now get scrounging for resources. Surprisingly, Darkwood actually has a rather well-fleshed-out backstory and a large cast of characters. Yes, life in the woods can be lonely, you have to work for every scrap of info, and details are often ambiguous in that Dark Souls kind of way, but the game eventually serves up some answers. I won’t spoil any specifics, but don’t worry, Darkwood doesn’t take the wordless “It’s up to YOU to interpret everything!” approach, or reveal it was all a dream in the end. The game ultimately delivers a satisfyingly concrete horror story.

Darkwood treads familiar survival game ground, featuring a semi-randomized world (landmarks are always the same, but their locations move each playthrough) and a day and night cycle. Days are dangerous, but manageable, while nighttime is pretty much guaranteed death if you don’t prepare properly. There are several hideouts scattered across the map, which you have to fortify, booby trap, and provide with electricity (the various evil things in the woods don’t like light) if you want to survive. Again, not unexplored territory, but Darkwood differentiates itself by trying to milk genuine scares from its overnight survival sections. It succeeds to a certain extent. 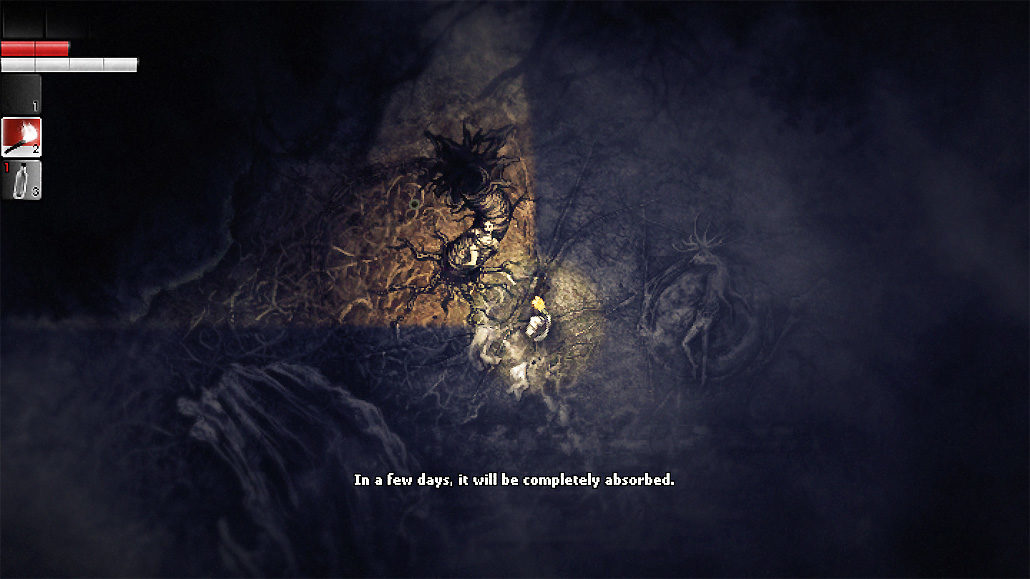 Night plunges the woods into almost total darkness, leaving you with one or two illuminated rooms inside your hideout as your entire world. Outside you can hear footsteps, creaking doors, heavy breathing, and howling abominations, but you can’t see any of it. The game taps into a lot of primal fears – the dark, the unknown – and wisely lets your imagination do most of the work. Darkwood’s pixelated graphics do have an oddly-effective hallucinatory quality to them, but the horrors your mind creates are infinitely more terrifying than anything the game can drum up. When a monster finally bursts through the door after minutes of tension, you will scream. At least the first few times.

Your nighttime circle of safety being so small means there’s not a lot to do once the sun goes down. You just sit around watching the lamp flicker and hoping nothing breaks in. The game has a number of tricks to keep the tension high, but they eventually wear thin. Your first five nights are intense, the next dozen or so have their moments, and then waiting for sunrise starts to become kind of a drag. Darkwood’s survival gameplay is at odds with its horror elements. As you become increasingly familiar with the game’s world and gather more resources horror gives way to repetition and routine. The better I got at the game, the less exciting and enjoyable I found it.

And then there’s the matter of difficulty. Darkwood takes pride in being a punishing game, specifically warning players that they “won’t be led by the hand,” which is fine, to a degree. I prefer to solve puzzles and explore without a barrage of hints and map pointers. That said, I expect a game to explain its basic mechanics. I had to consult FAQs to figure out how to do simple things like sawing scavenged wood into boards, and played for hours before I realized the game had a leveling system it never bothered to properly introduce. Add clunky combat and labored controls that don’t feel quite right with either a controller or mouse-and-keyboard setup, and you have a game that’s often more frustrating than challenging. 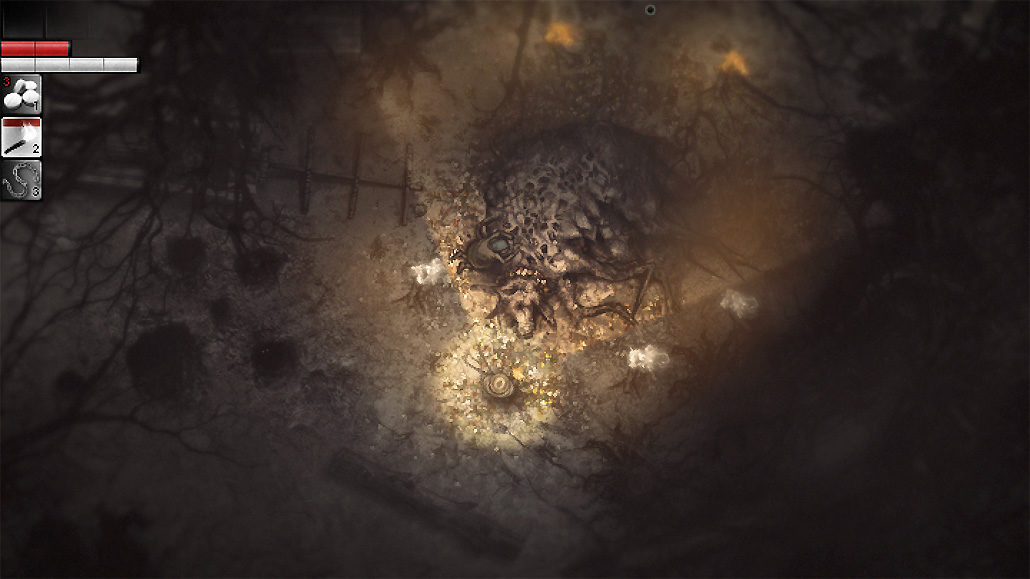 It doesn’t help that Darkwood doesn’t really have a “medium” challenge level. The game has three difficulty settings, with Hard and Nightmare both featuring permadeath, making them essentially hopeless for the average gamer. Meanwhile, Normal mode goes too far in the other direction, making death largely inconsequential. Being killed just means you lose half the stuff you had on you, and you can still recover it Dark Souls style. If you’re playing the game carefully, most of your deaths will happen at night in your hideout, which is also where you respawn after you die, so you often awake with your “lost” items sitting right there beside you. On Normal mode Darkwood isn’t hard, it’s just drawn out.

But hey, at least Darkwood provides a good value for $15. Again, I’ll admit, I partook in the occasional FAQ, but even with pointers, it took me a solid 20 to 25 hours to grind through the game. Add another 5 or more hours to that if you’re dedicated to working through things completely blind. And if you want to play with permadeath, well, good luck to you. Darkwood messageboards are packed with fans boasting about their 100-hour playthroughs. Darkwood is more than happy to devour your life if you let it.

This review was based on a PC copy of Darkwood provided by publisher Acid Wizard Studio.

Darkwood is a fine open-world survival experience, and spins a good yarn, but doesn’t quite succeed as a horror game. The ominous veneer wears off quickly enough, and you’re left with a somewhat cumbersome Don’t Starve clone. Darkwood has its moments and will please a certain dedicated breed, but less masochistic general gaming audiences may find the title more tedious than terrifying. Don’t venture into these woods unless you’re prepared to rough it.