In a modern world where CPU’s are becoming more and more efficient and a constant dropping TDP on mainstream locked processors is something like a tall cumbersome 120mm fan mounted tower cooler really necessary? Probably not, but you probably aren’t a big fan of the stock cooler that comes with your CPU either. This is where Cryorig steps in and decided to offer a simple yet effective way to replace that stock cooler, achieve lower temperatures, as well look much cooler in your custom build.

The Cryorig C7 is a no fuss simple low profile air cooler that incorporates features usually found on much larger more expensive tower coolers. But, something it does adhere to that many other do not is Intel and AMD’s “No Fly Zone” rule, meaning that as small and low profile this cooler is it should not interfere with the layout of any motherboard. Of course that relies on the motherboard manufacturer to adhere to it as well.  A nice side effect of the design is that there are no concerns regarding memory compatibility as well as providing nice airflow for critical board components that are often left out when using tower air coolers or AIO units. 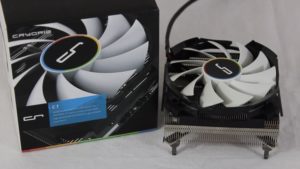 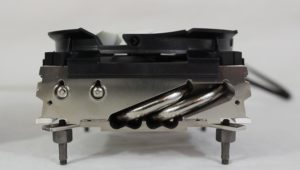 The complete unit measures 97mm x 97mm and has a height of 47mm, making it roughly the same height as the stock Intel cooler and slightly shorter than the stock AMD cooler.  Featuring a non user replaceable 92mm fan might be a turnoff for some, but an extended warranty helps alleviate those concerns a bit. Even as small as the unit is it still manages to pack four 6mm heat pipes to allow for excellent heat transfer, but keep in mind with a 100w TDP you’ll want to avoid this cooler if you’re using a high wattage CPU like the FX 6350,8320, 8350, 8370, and up. Because of this compatibility is limited to socket LGA 115x, FM1, FM2/+, AM2/+, and AM3/+.

Included in the Box:

Installing the unit couldn’t be an easier task if you’re using an Intel Socket LGA 115x cpu as it comes with the standoffs preinstalled for that configuration. Simply prepare your cpu by removing the old cooler, cleaning and applying thermal paste, holding cooler through the cpu cooler holes, snapping in back plate, and tightening the retention nuts. Plug in the unnecessarily long fan header and you’re done. An AMD installation requires relocating the mounting bracket but that takes only a few moments, however will require an unsupplied wrench. 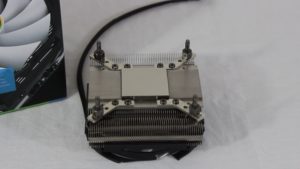 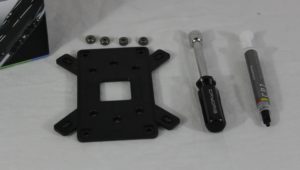 Performance is on par with what I was expected when compared to another aftermarket cooler like the CM Hyper 212 EVO. I would have loved to compare it to my stock Intel cooler for my 4770k, but as you can see it was actually defective and wouldn’t seat on my 4770k. Expecting temperatures close to the Hyper 212 EVO is bordering crazy, but they are similarly priced and one is infinitely easier to install and carries near limitless compatibility while the other tends to be a bit overwhelming for beginners and can be very limited with height and memory constraints. 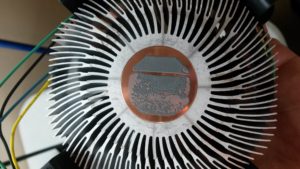 (Disclaimer: My 4770k was delid and the stock TIM had been replaced with Cooler Master Mastergel Maker Nano, and according to my results and comparisons put it roughly on par with a 4790k in terms of temperatures.)

Tests used to measure temperatures were ROG: Realbench, Cinebench R15, and a 30 minute gaming session of Far Cry 4 at 1080p Ultra settings paired up with a GTX 980.  Temperatures across the cores were averaged for comparison purposes. 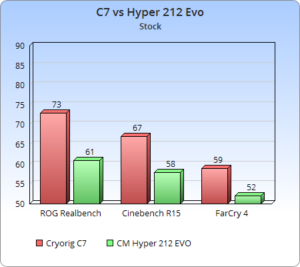 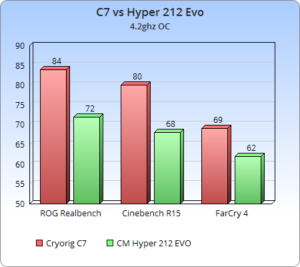 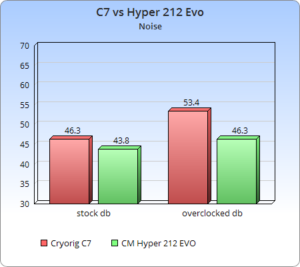 In the end the C7 does exactly what it set out to do, replace that stock cooler with something beautiful and much more quiet solution.  Sure for a few dollars more you could get the Hyper 212 EVO and get better temperatures and lower noise levels, but you’ll be sacrificing ease of installation, as well as memory compatibility.  On another note, I’d like to see you get a better air cooler in something like a Cooler Master Elite 110, you might find it a bit more challenging than one would think.