Children of Zodiarcs (PS4) Review – A Lucky Roll of the Dice

Children of Zodiarcs is an RPG project I’ve had my eye on for quite some time, and I’m excited to see it finally come to fruition on the PlayStation 4. As one of the first titles brought into existence under the Square Enix Collective label, this hybrid of strategy RPG and games of luck piqued my interest. Since the initial pitch, it’s evolved in numerous ways and ultimately follows a spry group of children that aim to pull off their biggest heist to date at the requests of their patron, Zirchhoff. However, it’s slowly revealed that Zirchhoff might not be the patron saint these children should be looking up to. 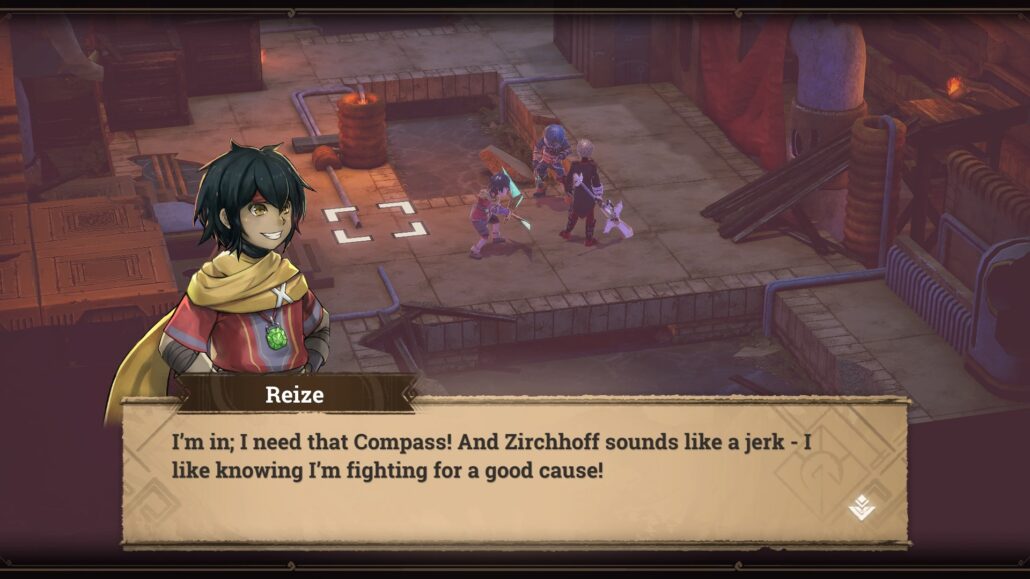 Normally, a scrappy young group of underworld ruffians might not stand a chance against the magistrates and guards that keep their fellow men confined to the slums. However, with a little bit of luck and powerful zodiarc weapons, these young orphans might actually stand a chance at making the score of a lifetime and pulling off a heist that could propel them into a life of comfort, or at least one that doesn’t rely on subsiding off of scraps barely fit for an animal.

Wielding a Zodiarc is no easy feat and it’ll take more than a little extra strength to make the most of it. Children of Zodiarcs is more than your simple move-and-smash tactical RPG, bringing with it a unique drafting mechanic to bolster the youths’ battle prowess. Both dice and cards are used in tandem to create powerful attacks capable of bringing the city guards to their knees. Players craft a deck filled with ability cards unique to that character and put them to use by shooting dice. Beyond that, the basic tenets of grid-based strategy RPG are in full effect in Children of Zodiarcs. 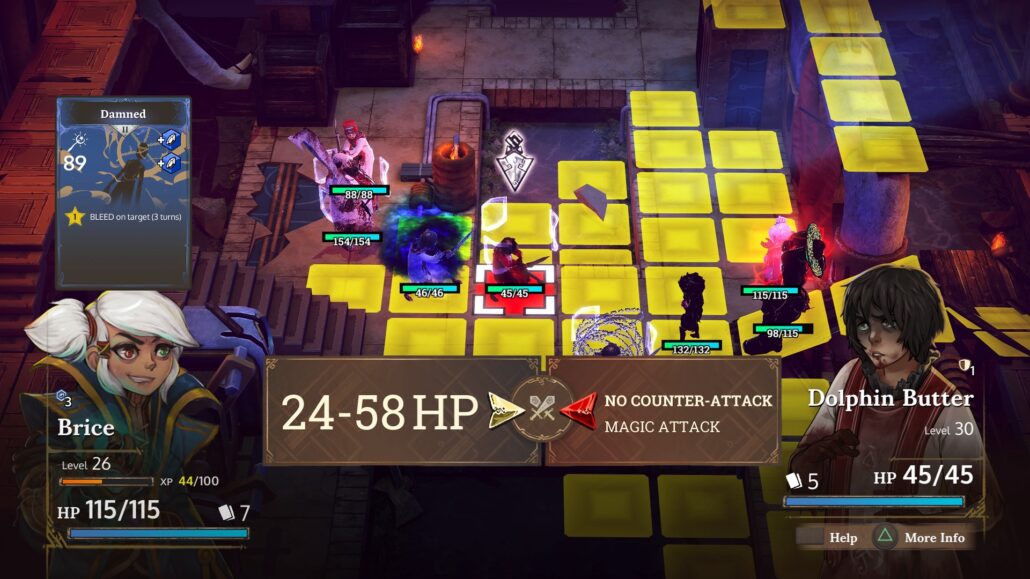 In most encounters, Nahmi’s team is frequently outnumbered by at least three-to-one. Moving out to attack stray targets is usually the best course of action, but extending too far typically results in having enemies gang up and pick off Nahmi’s team one by one. Survival requires a more reserved approach, sometimes advancing one square at a time to coax the enemy into moving into where the player can position themselves for a convenient backstab. Every character offers abilities that synergize great with one another, and abilities that can regenerate health or provide additional dice to roll are essential to surviving the later chapters.

Each young orphan in the player’s party first constructs a deck of ability cards that can be molded to a given playstyle. The number of ability cards that can be used grows as the player levels up, unlocking new abilities as they would in any other standard JRPG. Most characters offer some form of healing or support/debuff cards, so these are more essential than in most tactical RPG’s as healing can otherwise only come from a lucky die roll. If you’re like me, however, using the spell caster Brice and her leech ability, she can be turned into a powerful melee attacker that regenerates the amount of damage she does back into health. 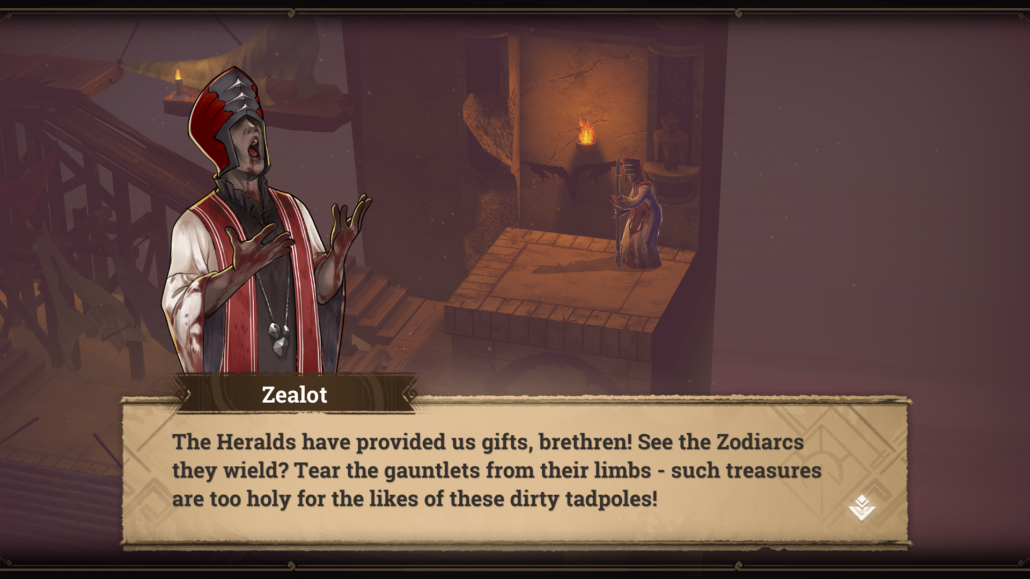 As characters level up and gain new ability cards, their versatility grows immensely. Even standard cards will automatically evolve into more powerful variants with level up, creating new combinations of abilities that otherwise wouldn’t have synergized before. Keeping the main character Nahmi stocked up on cards that can allow her to Shroud (a basic invisibility skill that enemies will learn to use later on) or gain free actions are immensely useful, as a lucky player can get a momentum going and use every ability in her hand in a single turn. Of course, as the players level up, so do the enemies to match. There’s no such thing as grinding your way to an easier time, as the enemies will always stay one step ahead of Nahmi and her band of rogues.

The dice that each character wields can be just as important as the cards themselves. Gained as random loot after each encounter, these special dice are the only sort of equipment available to Children of Zodiarcs. Each six-sided die comes with a unique assortment of abilities to each side. Some might boost attack damage, others might heal a little bit, and the most useful ones are stars and lightning bolts, which trigger card abilities and offer a free additional action to attack once more, or more importantly, draw a couple of extra ability cards. 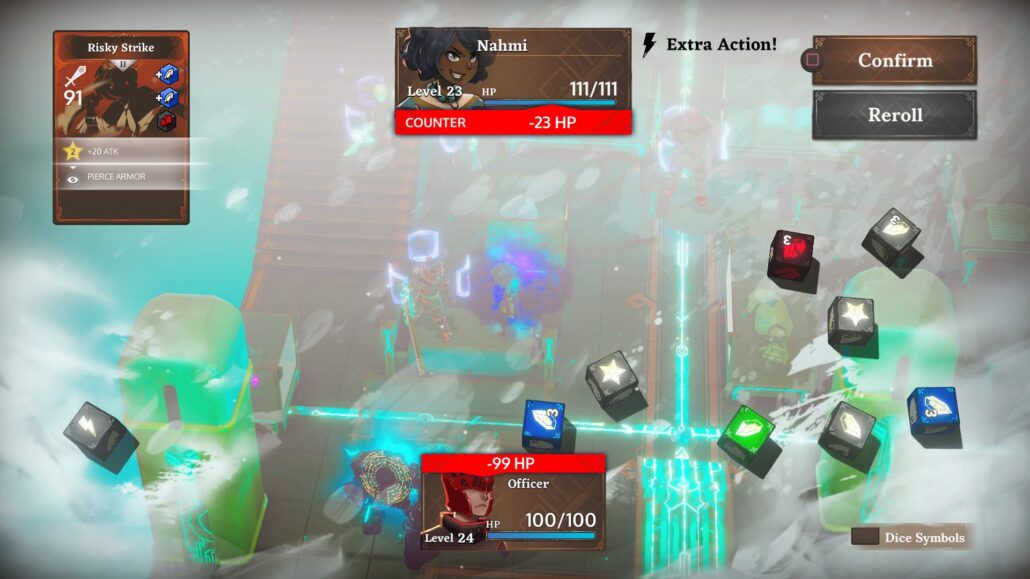 Rather than any grand story to save the world, Children of Zodiarcs stays on a much smaller scale and focuses on the trials of orphans on the streets and the nobles that rule over them. It’s filled with charming character design and orchestral music. Neither stand out as paragons of their respective medium, but both give Zodiarcs a bit of charm that’s overshadowed by the solid gameplay.

Children of Zodiarcs is a charming little tale that fits very comfortably in the Venn diagram between tactical RPG’s and games of luck.