Rarely is there a game that completely breaks the mold of a genre to such an extreme. Mash-ups of different real-world and fantastical genres and worlds can be a tricky thing to conquer, something that takes a lot of effort to blend the different elements to make for an enjoyable game for everyone.

The Bloodiest Super Bowl Ever

But sometimes something incredible happens when a genre-breaking, and combining, video game is released. American Football is a strange sort of game, one that is already somewhat violent (as are most sports) and evokes a certain level of aggression. But when that’s combined with Warhammer, it gives it a whole different sort of comical violent air to it that’s just downright hilarious.

But this is a fantastic recreation that puts turn-based strategy, football and Warhammer together in near perfect harmony. After playing for a few minutes and moving each gloriously rendered player about, I realized that American Football is decidedly turn-based as it is in real life. So this mimics that, though on a singular level.

At its core is a very refined sports game complete with useful player statistics and an actual player trading program that’s nearly as good as a dedicated real-time Football or other sports game. Manage your team by summarily getting rid of anyone you please and even upgrade their skills to become better players.

Anyone who loves any sort of fantasy fiction or game will absolutely love the larger than life characters and illustrations as they’re portrayed here. Dwarves are decidedly stocky and their lofty locks and braids are all fairly individual and unique, giving it a true fantasy vibe. Other than that you’ll see a large variety of Orcs, Vampires, Skeletons, Trolls, Ogres and of course Elves.
The commentators too are greatly appreciated for their unique humor that’s rolled into a very American Football like setting. The humor is very well done, talking complete nonsense yet at the same time infusing it with the a fantastical flair that doesn’t need it’s own translator either, it can be appreciated in its own right. That’s the mark of good writing, in my opinion.

The campaign puts you in charge of the Reikland Reavers, a human team that hasn't exactly been doing so great as of late. After the first game, a gruesome introduction to the world of Blood Bowl, the entire team is fired and you must recruit a completely new team and attempt to find a sponsor. 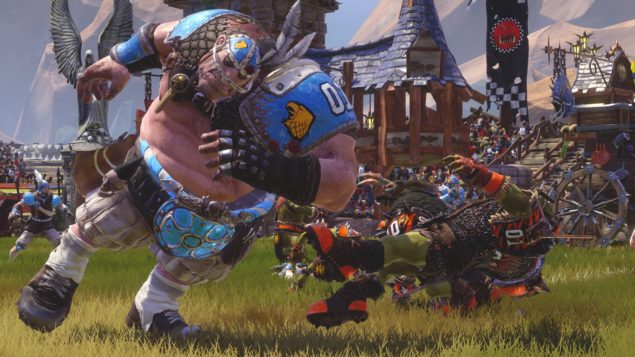 The campaign is actually quite brilliant in how it slowly introduces you to new aspects of the game after winning each game. And winning isn't easy by any means. The success of every move you make outside of the bounds of how far your players can move is determined by the roll of a die, which inventively seems to mean that you'll always end up falling down, and sometimes even knocking yourself out as a result!

Blood Bowl 2 is a very challenging yet satisfying game. The violence is outrageous yet comical, the commentary is fantastically done and more than appropriate for the game. But that difficulty can sometimes be a bit daunting, and very frustrating at times. It seems that your own players are never quite good enough to actually push back or knock down the opposing team. I always seemed to be the one ending up getting almost completely wrecked on the field. The dice never really favored me. At one point I think my entire team was nearly knocked down. And trying to run for that long touchdown? Yeah, that never seemed to happen like I planned. It's almost prohibitively hard at times. Frustrating to say the least. That and the pace of the game might be a bit slow, even though you might want to

But overall it's a fantastic foray into Fantasy Football in the most literal of senses. You can destroy your enemy in dazzling animations and really have a blast trying to think ahead about your next move. The best part is that the pace kind of actually mirrors that of real American Football even.