It feels like only yesterday that I first lost my pet frog and followed it down a hole only to stumble across a battle tank hiding in my backyard. That was the setup for an adventure that managed to be one of the first titles I played on the family’s NES. The original Blaster Master was an adventure I tried over and over to play through as a kid, but never made it quite all the way to the end in the single sitting required. As a new Nintendo console has finally made its way onto the market, Sunsoft has arisen out of obscurity to release an updated version of that classic: Blaster Master Zero.

Staying mostly faithful to the original NES game, Blaster Master Zero returns to those underground caverns as protagonist Jason tries to rescue his runaway pet frog. Subsequent Blaster Master titles tried to infuse lore into the series, such as having the main character meet and marry a mysterious girl named Eve and father children that would become the heroes of later titles. That lore becomes integral to the story of Blaster Master Zero as Eve finally gets introduced into the canon and operates as the supporting mechanic for Jason’s tank, known throughout the story as Sophia-3. 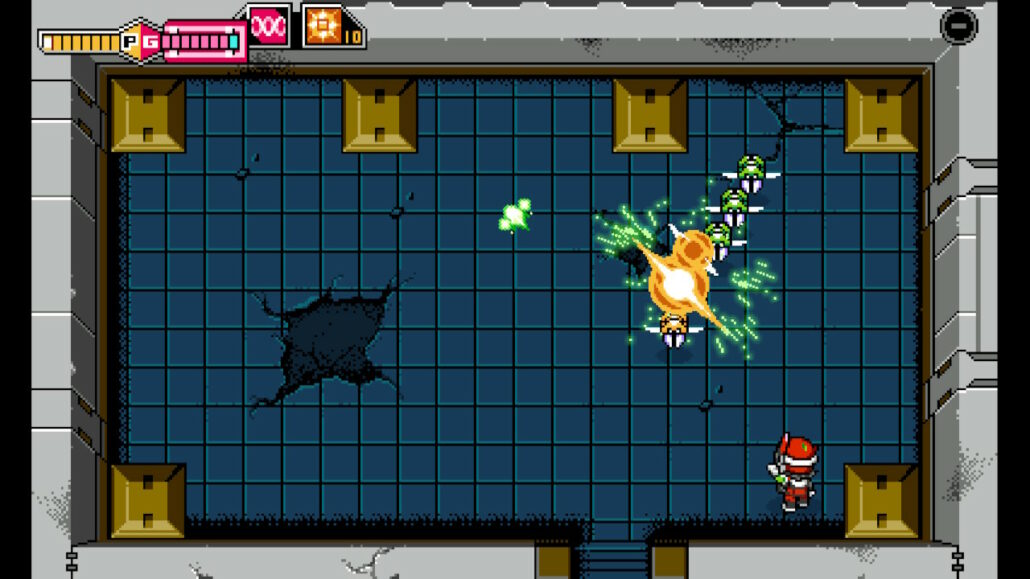 While the maps that fill out Blaster Master Zero’s world might evoke thoughts of Metroid, it’s really quite simpler than that. Each of the eight Areas are separated from one another and only connected by a single entry/exit point and no larger map tying it all together. And while there can be some light exploration  to fill out every room on the map or uncover health upgrades, there’s not much reason otherwise to venture off the beaten path. The moments where the Sophia-III might discover a breakable floor or hidden door are so few and far between that there’s little reason to put that same emphasis in exploration as that of a Metroid game.

For the few times that players might stumble across a mini dungeon to explore on foot as Jason, the rewards are typically viewed as non-essential upgrades. Anything that would make traveling the subterranean compound easier are unlocked at a regular pace through the brief story. Instead, players are rewarded with new subweapons, of which only a handful are effective enough to use over the standard arsenal. 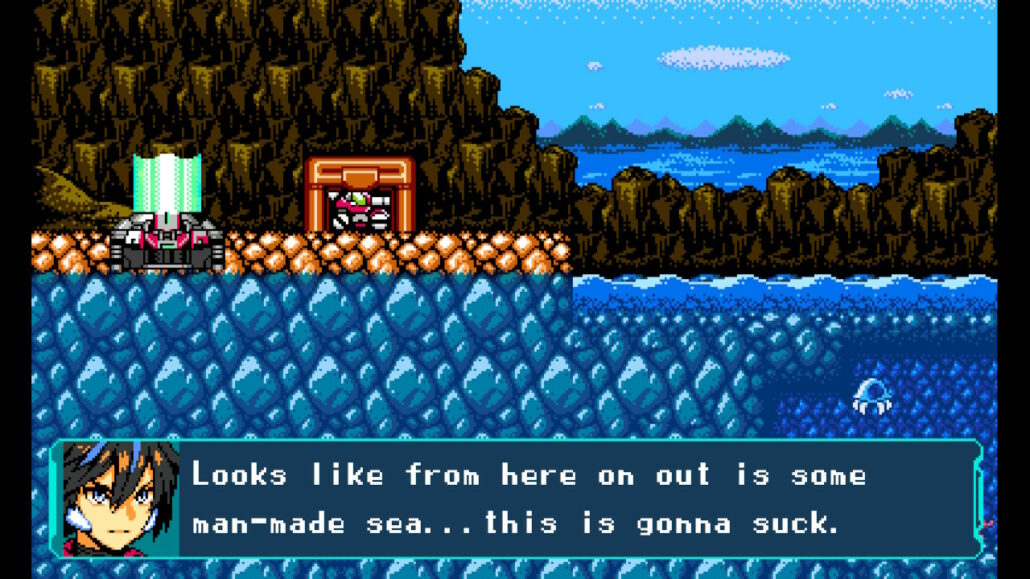 Blaster Master Zero attempts to offer diversity in the eight area biomes, ranging from the standard forest of Area 1 to underwater segments or levels that offer an artificial stealth segment. True to any other title that offers an underwater level, those are among the worst areas to traverse through in the Sophia-3. The other seven areas each have their own gimmicks to distinguish them apart, but the movement in the aquatic zone is so poor and plodding that it deserves mention. Once the player gets past that segment or unlocks an upgrade that helps the Sophia’s agility, Zero’s pace certainly picks back up and becomes a more enjoyable experience.

When I played the original Blaster Master as an after-school treat when I was growing up, I found the segments whenever Jason stepped out of his tank to be frustrating and generally not very fun. Fast forward twenty-some years and I still feel the same in the Switch-exclusive remake. Traversing the main thoroughfares of the underground on foot is a very slow and plodding affair, highlighted further by the platforming and jumping segments where Jason can barely fall more than a couple squares distance before dying. Any moment that requires finesse or grabbing ahold of a ladder mid-jump are further hindered by how floaty and imprecise Jason’s jumps can be.

In segments unique to Jason’s on-foot approach, Blaster Master Zero’s miniature dungeons are played through the same top-down perspective of the original adventure. A novel upgrade system has Jason’s weaponry grow in power across eight levels, each offering a different gun type that can be swapped between at will. At its highest rank, Jason’s armed with a wave beam that shoots through walls and defeats any reason to use the other seven weapon types. Taking damage can knock Jason’s weaponry down a rank, but by the time you have access to his eighth weapon, just about any hazard can be shot down before it poses a challenge. These segments bring the action down to a far less interesting pace than being inside a tank. Just as I thought these segments weren’t enjoyable as a kid, the same holds true with the Nintendo Switch version. 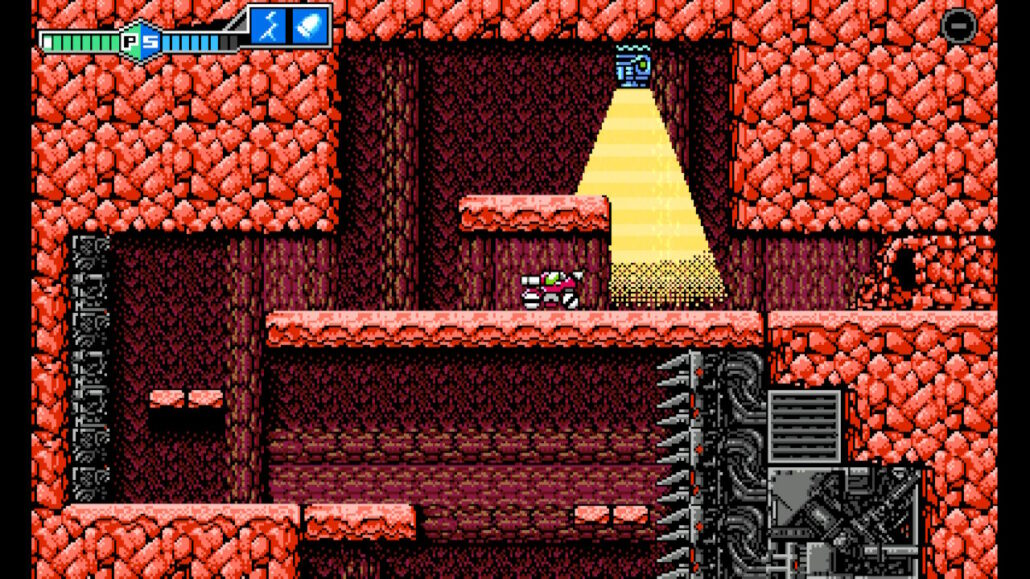 Aside from the artificial difficulty that comes from Jason’s tendency to fall to his death, much of Blaster Master Zero leans on the easier side. Frequent checkpoints ensure that whenever Jason and Sophia meet their demise, there’s typically a place to respawn with full health no more than a few spaces away. Because of the safety net, I never felt like I should pull back to try to be more cautious instead of running in with guns blazing. This changes during Zero’s final act, however, as navigation becomes an endurance run with new mechanics and enemies thrown at the player with only sparse checkpoints to save the player’s progress.

While some may consider it a minor gameplay feature, the usage of HD Rumble in Blaster Master Zero is among the best on the platform. The Sophia-3’s arsenal consists of a large number of destructive weaponry and their power is well represented with the Switch’s various rumble features. Any time I had the main cannon charged up was like a tingly bliss in my fingertips. 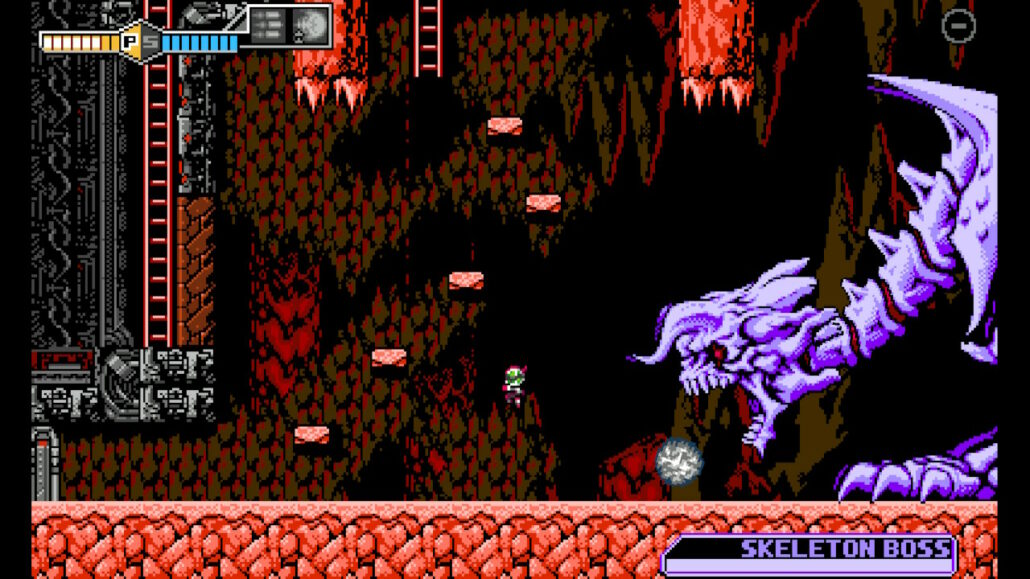 Blaster Master Zero is a rather strange affair that I wanted to approach with more reverence given my childhood memories. With a sparse number of titles available to Switch early adopters, any titles available are worth enjoying on the new hardware. The updated tale of Jason’s origin story is a fine way for new players to get into the series, but there’s a number of core gameplay problems that keep it from being a must-play.

Blaster Master Zero tries to recapture the joy of the NES classic, but the out-of-vehicle segments are just as frustrating as they were nearly thirty years ago.