It's become quite a common occurrence to see a game based on a Games Workshop property recently, all seemingly placing themselves inside the tactics or strategy genre (with Vermintide being a notable exception) it's easy to see why the Warhammer 40K setting lends itself to the genre without over-saturating the market by itself.

However, there has also been a recent glut of space-based, as well as strategy games in general. Does this bode well for Battlefleet Gothic? I came into the game wanting to love it. The fantasy space setting, the fleets of cruisers, battleships and smaller escort vessels. Everything was seemingly made for me. The downside is that once I started playing the game, I saw that it really wasn't.

In strategy games I have always moved for a small, methodical, expansion. It resembles turtling in many ways, only that I'm more than happy to expand once I'm happy enough with the security of what I've already got. Battlefleet Gothic seems almost custom built to support this, with what genuinely feels like the slowest combat I've ever encountered in a strategy game, but since there's very rarely anything fixed to defend, it seems like a hindrance more than anything else.

The exception to this rule is the Eldar faction, which has the fastest ships in the game, with technology and shields that rely on moving at speed to disrupt radar, outmaneuver enemies and attack at the weakest points. The other factions are the Imperial Navy, large ships that look more like space-borne cathedrals with high firepower and defense, but by far the slowest in the game. The Chaos have reasonably fast, but less well armored ships with less powerful weaponry and finally the Ork Pirates have heavily armored and customizable ships that aren't very maneuverable and also likely to mutiny when in trouble.

There are an abundance of small features that would, in different circumstances, push Battlefleet Gothic up so much higher than it will eventually fall. The morale of your ships, leading to mutinies that you quell by executing the leader of the uprising, is an excellent feature. In addition, the wide variety of skills that can be used within battle, from bombs that will wreck the enemies shields or armour, to mini warp jumps that can act as a way to flank the enemy, and add a little haste to the combat.

Time is Battlefleet Gothic's worst enemy. From the very start of the game, regardless of whether you're playing the campaign, skirmish or multiplayer, you're limited by the smallest of ships and tasked with advancing through playing. However, the profiles you use are separate, which means that advancing in single player doesn't unlock later upgrades in multiplayer and vice-versa, not to mention that your profile in the campaign is separate to that of the skirmish. This makes for an annoyingly slow progression in all aspects of the game.

This is felt particularly harshly in the multiplayer of the game. While you are matched with people of equal skill level, more accurately you are matched with the closest person to you. This has led me into matches against people vastly stronger and more experienced than me and led to a quick and jarring loss. While it is in the open beta stage, so there's a good chance of a more even playing field later on, unless a decent sized community appears then you're going to have to play multiplayer just to keep up.

Where this glacial pace is more of an issue is in the Skirmish and campaign modes. You can level up through creating a custom campaign or playing general matches outside of the story, but it defeats the primary purpose of any skirmish, to jump in and use the best tools right from the start. The same problem plagues the campaign, which is effectively a number of skirmish matches, with a few designed objectives, following a story that's told by a handful of drawn cutscenes and voice-overs.

The one area the campaign shines is later on, as it opens up, letting you choose which fight to take part in and where to prioritize. There are multiple systems and at any one time you will have to choose which area to sacrifice and which to secure. This is made mandatory as you are given a limited number of deployments on any given turn.

It's a shame because the combat is where Battlefleet Gothic really shines, so getting to it shouldn't be this hard. The variety of ships on offer are further expanded through a number of customizable options, letting you spend renown gained in battle on upgrades and skills, each ship having a limited number of slots which leads you to focus on specializing with each ship. In addition to these, as your ship increases in level you can further specialize your ships through increasing the abilities of certain crew members.

Even in battle, this level of detail is evident as with any ship larger than an escort, you can target exactly what part of the ship you want to focus fire on, adapt how your ships combat the enemies by setting optimal range with the enemy and even whether your ship should fire from the broadside or aft. These small settings you can choose from, working with the strong AI system Tindalos have created for the game, make the battles an absolute joy, particularly so when using either the Eldar or Chaos factions.

What is important are the ramifications of battles. Should you lose a battle and your ship be destroyed, it will be unable to use for a number of turns until it's fixed. This, in the constant campaigns, can be close enough to a deathblow if you haven't got a decent reserve of leveled ships, feeling much like losing your top team on XCOM to then be stuck with the novices who barely know which end of the gun is which.

Tindalos has made Battlefleet Gothic a joy to watch as you see ships pass by in close proximity to each other, explosions going off all around as they fire lasers, cannons, rockets and bombs at each other. Even the backdrops, planets, asteroids and other space debris all add to the feeling that you truly are taking part in grand space battles. I do, however, have an issue with the audio. The voice acting ranges from above average to somewhat cringeworthy and the music tends to be as slow and listless as the rest of the game, adding little to no urgency or enthusiasm to even the grandest of battles.

I just know I would have found Battlefleet Gothic more enjoyable if just a few things were different. The first would be that the skirmish needn't lock you out of the later ships until you've played a considerable amount of it, you're against the computer and there's no need for it to make you jump through hoops to get to the enjoyable part of the game. In all, it's an enjoyable strategy game and worth checking out. 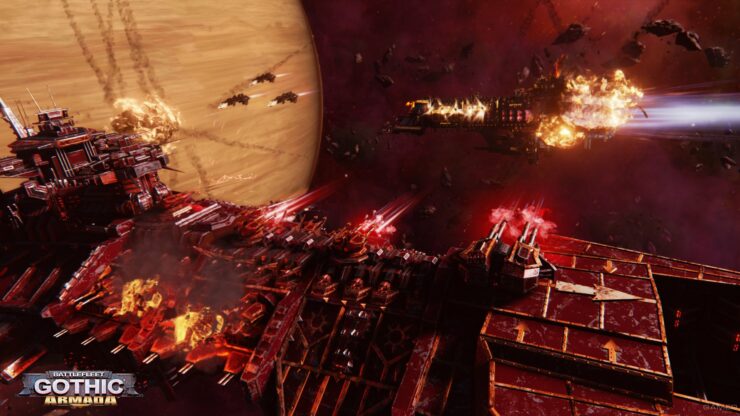 Battlefleet Gothic is a mixed bag. The slow pace hinders a game that should be all about letting you jump in to epic space battles but as you develop, leveling up ships and customising your fleet to what you want, it does prove itself to be a strong contender.