Board games are experiencing something of a Renaissance at the minute. The old favorites like Cluedo, Monopoly and Scrabble are all still tucked away on your parents' shelves, but new, quirky and fantastical games are cropping up all over. This might have to do with a revival in geek culture as the mainstream, the price of production decreasing, or possibly the influence of a certain Star Trek actor’s popular web series, but the effect is starting to spill over into the digital realm.

Board games are finding new homes amongst digital distributors, and Armello is no exception as it makes its way to console (PS4 specifically) and PC. Though with no physical version (by which I mean there is no board, nor a disc) Armello is still a board game in function. Players choose a character, and make their way around a board to take the throne of Armello from a dying king. 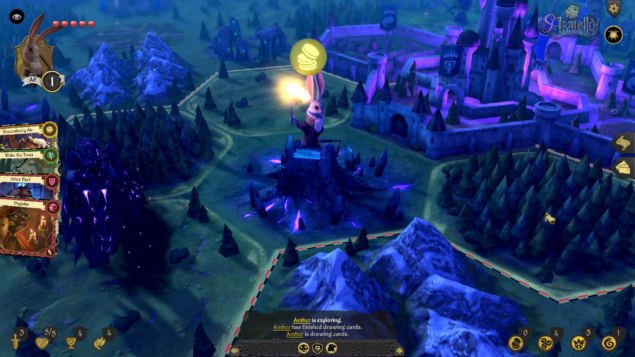 It’s nice to have a backstory like this, and the influences are clear with its beautiful collection of anthropomorphic animal clans to choose from. Obviously the story is not the crux of the game, as it’s merely an excuse for the actions and mechanics of the game itself. It does work well to create a true little Game of Thrones setting for the players to lose themselves in, especially when the action starts building towards the always climatic home stretches.

Armello is not a simple turn based game, since there are a lot factors that affect gameplay and the outcome of events. These can seem a little off-putting, especially during the quite dry tutorial, but once you have an understanding of what each symbol means, the game takes a new, decisive form. I found myself understanding a lot about the game once I tried explaining it to a friend.

Each of the four characters competing on the map has a collection of stats: ‘fight’, ‘health’, ‘magic’ and ‘wits’ which all have their own benefits. Fight is obviously how good your character is in combat, while health is how much punishment you can take. Magic is responsible for spellcasting prowess and wits is what you’ll need to overcome the games perils. 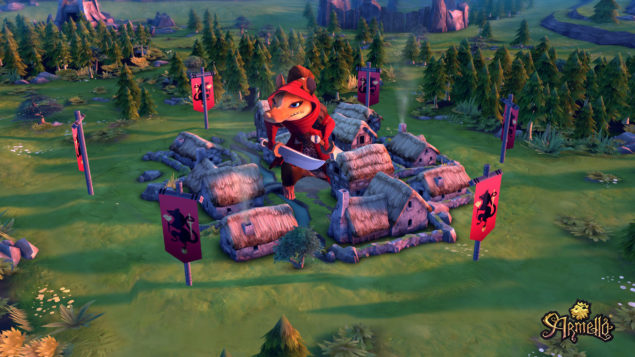 Most of these abilities are visualized by dice rolls, where you’re given a specific number of dice depending on the equivalent skill. Naturally with dice rolls, there is an element of luck in the game, which helps Armello feel like a true board game, no matter how frustrating it is to lose what a appears to be an advantageous roll. But that is part of the game, and one that forces you to readjust your strategy. In a game where luck is a factor, you can never have an absolute plan, which makes the adventure so much more fun. Adapting to new information is an exciting and addictive element of Armello, as you race to beat the others to the crown.

Taking the kingdom is no easy feat, mind, and dumb luck alone won’t prevail. Gameplay is broken down into three stages; the board which takes up the majority your time, and Perils which are similar to tabletop RPGs and fights. The board is circular-ish and encompasses the palace, where the mad dying king resides. Most players will want to breach this palace in the late stages of the game to recover the kingdom. But getting there will involve more than a few perils, where the player most roll a certain selection of symbols or suffer an unpleasant fate. These are marked on the map, but cunning opponents may drop them in your path during your turn. While fights break out while you and another character clash on the board. These can some of the most exciting portions of the game as you try to hunt, or out maneuver your enemies.

A lot of the time, combat will be the last thing on your mind as you quest across the land, but it is always worth preparing for as other players might attack out of desperation. It’s unfortunate that the game does not support local co-op. Although entirely understandable as obviously you cannot hide your cards on a big screen, it does still feel like it’s taking away a core element of what makes board games still so accessible. Luckily the Armello community (at least on PS4) seems quite busy, and there are always players to face off against, even if they’ll rarely have a microphone. And for those seeking a shorter experience, single player is also available, although naturally the AI is far less fun to out play. If you can find a group willing to equip chat, or better yet, friends to play with, it’s a blast taunting and heckling each other when something succeeds or fails. 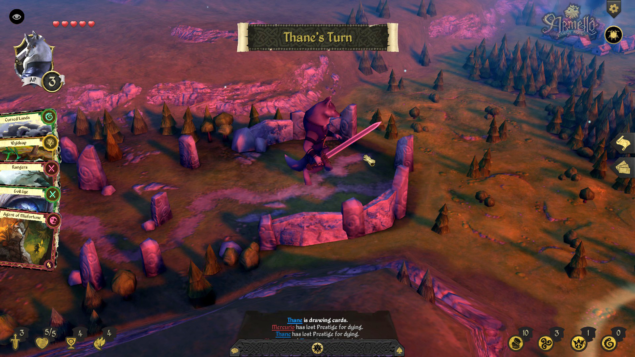 Where Armello really comes into its own is when a plan, whether it be the first highly formulated battle strategy or the fourth hastily cobbled idea after a series of unlucky events, comes together. Outthinking an adversary is extremely satisfying, and very possible given the number of options you have to overcome obstacles and win the game. Some characters react differently during the night and day cycles, or on different tiles.

One of the biggest, game changers in Armello is the cards. You choose from three decks: Equipment, Spells and Trickery. Each deck is built for a specific strategy, though you’ll only start discovering the cards when you draw them yourself. It’s a nice touch that lets you adopt your own play style and tweak each game depending on the new and undiscovered cards you come across. To win, you’ll need to make sure your plan aligns with what cards you have available, as well as your characters various strengths.

Winning can be accomplished in four different manners. This is a brilliant idea that keeps the game afloat, meaning everyone can be working to different ends to complete the same overall goal. It also means that as a player, you can keep your opponents guessing as to which victory you intend to achieve.

The simplest of victories is the Kingslayer, breach the palace and defeat the king in combat. Although simple, failing to slay the king might only assist other players. Prestige, a rank you gain from completing quests and defeating enemies can also win you the king. If the king dies from his madness, the player with the most prestige wins, and if the king is wounded from combat, his natural death may arrive sooner. Spirit victories require you to collect four ‘spirit stones’ from around the procedurally generated board, before cleansing the king. Finally a rot victory forces you to take the same disease afflicting the king, and overcome him that.

Each of these can influence the other, and none are set in stone. Knowing when to shift between victories is the best way to ensure victory.

Armello is easily one of the best digital board games out there. Although it might seem challenging to get your head around at first, the payoff is more than worth it. If you enjoy turn based strategy and a challenging, shifting competition, this is your game. It might seem almost childish with its cast of animal characters, but the tactics involved are extremely complex. It can take over an hour to complete a game, but win or lose, you’ll have a hell of time traversing the board. And Armello has that secret ingredient that makes you think of it days after playing. When your mind is completely unoccupied, you’ll find yourself coming with different ideas, analyzing past mistakes and yearning to take up the quest all over again.