The Japanese geek hotspot of Akihabara hasn’t been any stranger to video game vacations. Developer Acquire has already released a small number of titles following Akiba’s Trip (including an anime) centered around stripping vampires. Thankfully, this latest visit to the Electric City is a bit tamer than before, instead focusing on delusions that keep everyday life from continuing as usual. That isn’t the only change to Akiba’s Beat, as a new combat system changes up the experience, for better or worse. 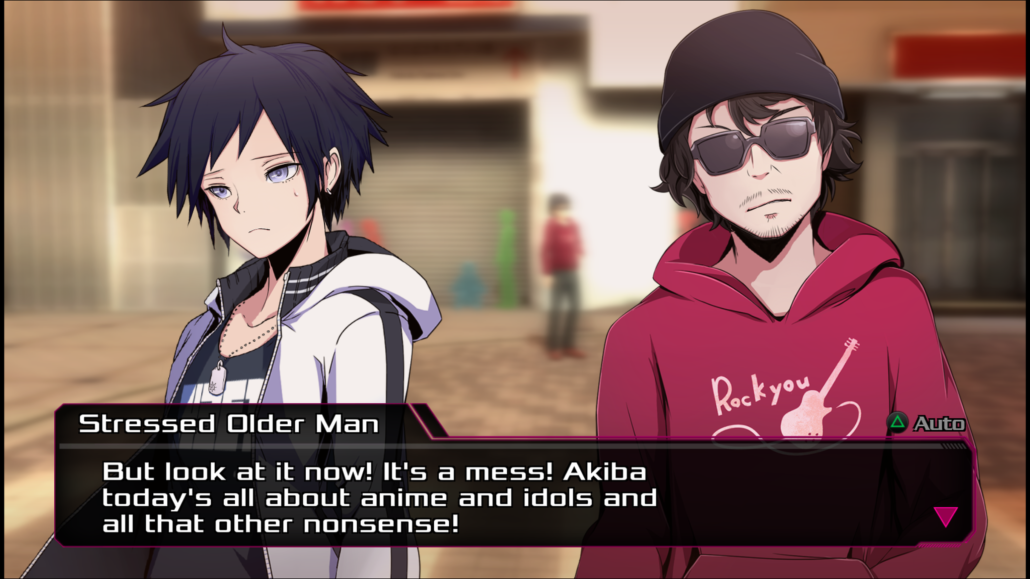 Trapped within an ever-cycling Sunday in sunny Akihabara, players are tasked with seeking out the delusions that infect the mecca of anime culture and destroying that which threatens the NEET life. It’s a stark difference from the tale of vampires that once walked the streets and were impervious to all but being stripped down and exposed to sunlight. By comparison, Akiba’s Beat is much more of a game centered around the average fanboy, if that fanboy could engage in magical warfare and beat up Persona-like shadows to the tune of sugary sweet J-pop tracks. It’s not just the lack of vampires that’s changed from the days of Akiba’s Trip, however.

The decision to completely overhaul a game’s battle system can be a tough gamble to make if your franchise isn’t called Final Fantasy. While the first trips into Akihabara’s geek heaven were more in the brawler-style of action RPG, Akiba’s Beat takes a new approach. Modeled most closely to the recently released Tales of Berseria, a four-player party tackles the Delusionscape in active battles that share more than a few similarities with the Hideo Baba-developed series. These ‘scapes are minor dungeons scattered throughout the Electric City, each based on a particular character’s delusions and shadows. While they each have their own theme, players will learn pretty early on that there’s very little diversity beyond finding the right switch to open the doors blocking their progression. 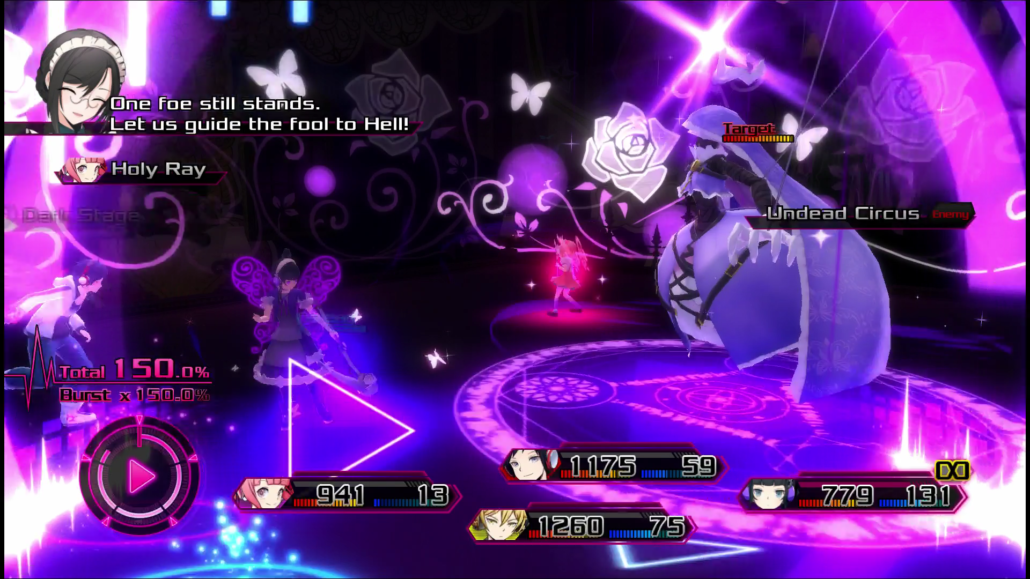 Combat flows in a flurry of normal and special attacks, each programmable to a directional input and face button simultaneously. Jumping is something newly added, but there’s a clunky slowness to pulling it off that doesn’t flow naturally. Sadly, there’s a clunky feeling to just about every part of combat all the same. Attacks and dodges both pull from the same pool of AP which refreshes over time. Overextending a combo will often leave the player standing around awkwardly for a few seconds until it refreshes, something that Berseria alleviated by giving other ability options to use while it refills. One option to get away from the limited Action Points is through the use of the Imagine Mode, a special powerup that has the character don a pair of headphones and jam out to their favorite idol anthem, all the while giving unlimited AP and combo potential for a short time.

Admittedly, I wanted more out of Akiba’s Beat given the shift into a team-based action RPG modeled after the Star Ocean/Tales of Series. After the success of Tales of Berseria’s combo-centric battle improvements, I had hoped such renewed focus would inspire the team at Acquire for their first action-RPG. What I received was a title that understood the framework to those titles, but not the magic that turns everything into a cohesive experience. 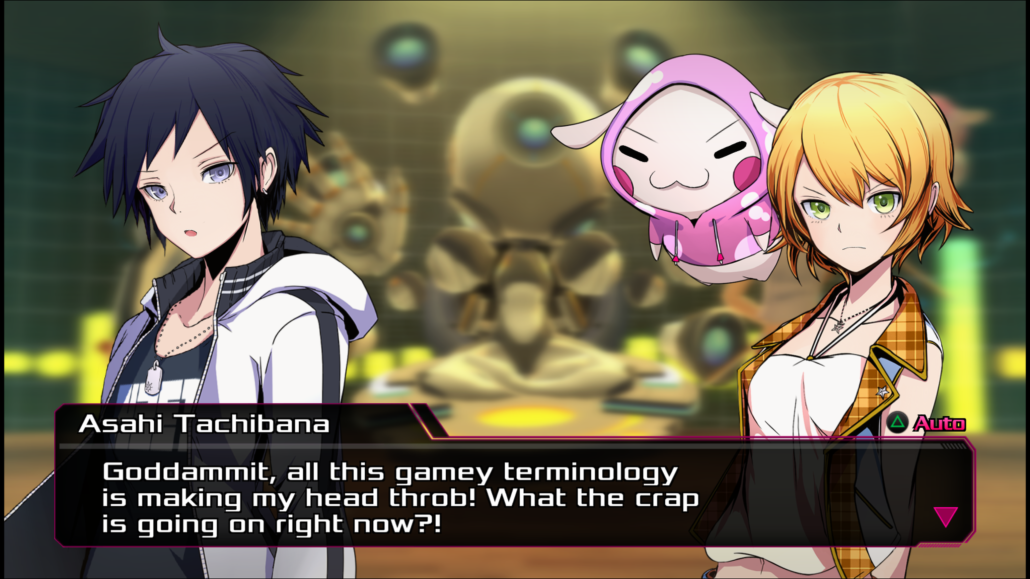 Akiba’s Beat wears the inspiration from other titles on its short-sleeve NEET T-shirt. Beyond the party combat that feels like a less-refined Tales of Berseria, the idle banter and in-combat dialogue feel too close to the modern Persona titles, with an equally over-excited mascot character. Unlike Persona, Akiba’s Beat does offer the possibility of swapping out Operators, each conferring their own passive bonuses (including HP/MP regeneration) in battle. It’s worth switching these out frequently just to prevent the same repeated lines from getting stale.

Audio can be an important aspect to any RPG and help create some memorable moments. Unfortunately, those memories will typically be of the forgettable battle themes. When not enjoying the J-pop tracks in Imagine Mode, the regular battle themes are among some of the most generic I’ve come across in any RPG. There’s also the addition of both English and Japanese audio tracks, though, with the amount of reused dialogue, players may find themselves wanting to put on their own headphones and listen to a much more upbeat soundtrack selection. 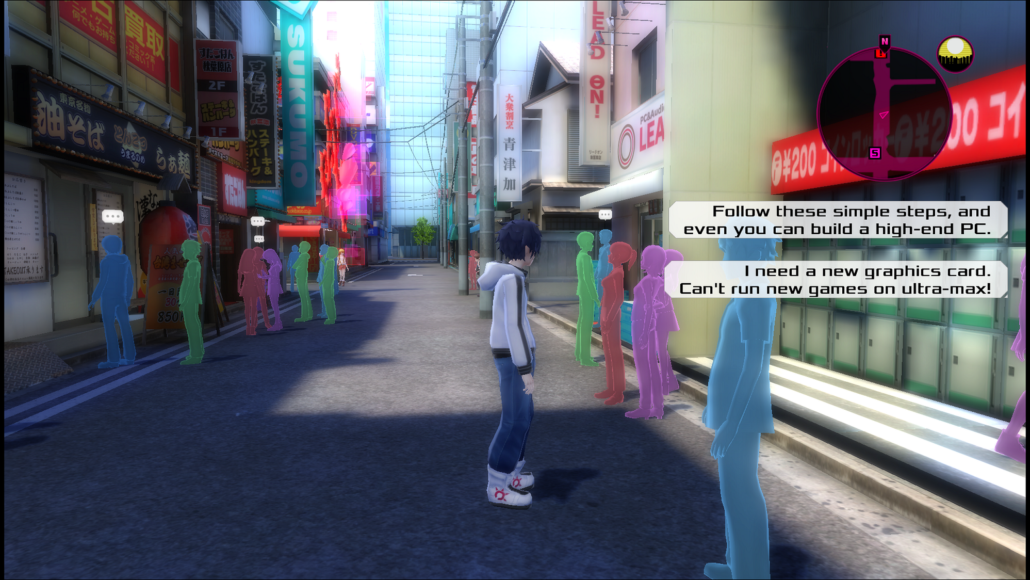 Players will run through the same side streets of the Electric City that were first tread in the prior two Akiba’s Trip titles. Save for updated billboards to market the current hotness in Acquire’s lineup, much of the city feels exactly as it was just a few years ago. Gone are the crowds of uniquely dressed cosplayers or side streets filled with maids begging you to visit their cafe. In their place are silhouettes of bystanders that don’t serve any purpose other than to keep the streets from feeling completely empty. The only characters of note that the player will come across are those related to the current story arc and don’t contribute much beyond that unless they’re an active part of your roster.

Akihabara’s a fine city to take a day trip to in video games, but those looking for a quality vacation might want to skip getting their passport punched this time. Akiba’s Beat was one of those rare RPG’s where I tried to find something special to appreciate, but every time I caught the glimpse of something special, the mediocre control and gameplay kept me from acquiring it.

Although a tribute to the likes of Persona and the Tales of Series, Akiba's Beat doesn't have quite enough substance to recommend another Sunday visit to Akihabara.