Agatha Christie: The ABC Murders Review – The Butler Didn’t Do It, This Time

Adapting popular works of literature is a thankless job. Finding the right balance between original and tweaked elements is a true nightmare and, no matter what, some are always going to be disappointed in the end. Even more so when the original work is from a celebrated author such as Agatha Christie, one of the most popular novelists ever. Several adaptations of her popular novel The A.B.C Murders have been released in the past, with uneven results, and yet another video game based on it is now available on PlayStation 4 and PC. 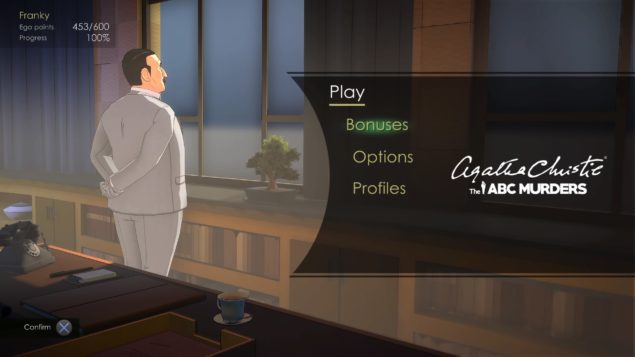 Agatha Christie: The ABC Murders, developed by Microids and Artefacts Studios, is a classic point and click adventure featuring the characters that fans of Mrs. Christie's works should be quite familiar with, such  as renowned Belgian detective Hercule Poirot, his old friend Arthur Hastings and Scotland Yard's Detective Chief Inspector James Japp. Many of the other characters of the novel are represented quite faithfully in the game, from Franz Ascher, the first victim's husband, the temperamental Donal Fraser and lovely Thora Grey. Some of the characters of the novel didn't make it into the game, but the adaptation manages to be faithful enough even without their presence.

The A.B.C. Murders tale is just as engaging as it is in the original novel. The game's story follows Hercule Poirot as he investigates a string of mysterious murders by a dangerous serial killer. The killer, commonly known as A.B.C., has a rather intriguing modus operandi: he sends letters detailing the murders to Poirot before carrying them out, leaving an ABC railway guide with each victim as a signature. Not one to turn down a challenge such as this, Poirot decides to get to the bottom of the matter with the help of his friends Arthur Hastings and James Japp. Even with cuts and tweaked elements, the story grabs the player's attention right from the start and only lets go once the murderer has been uncovered. It doesn't take that long to reach the end of the tale, sure, but you'll have a great time searching for clues, interrogating people and ultimately solving the mystery of the A.B.C. murders. 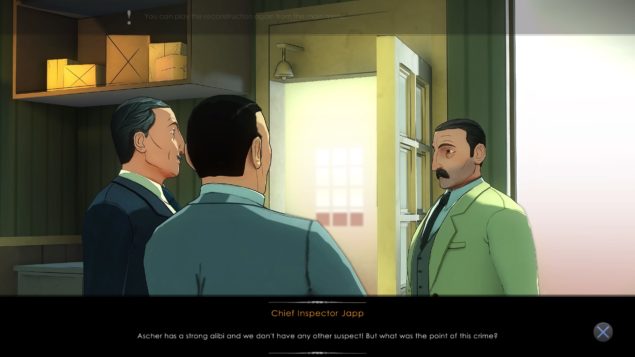 Being a point and click adventure, Agatha Christie: The A.B.C. Murders plays pretty much like the best adventure games of the past. Players will explore a variety of locations in search of clues, which are required to answer questions during the Little Grey Cells segments, which are needed to proceed in the game. While searching for clues, from time to time players will also have to solve some puzzles in Thinking sequences, and interrogate potential witnesses. Interrogation sequences are quite interesting, as they require you to observe witnesses to understand his or her current state of mind so that you may pose the right questions and get them to collaborate. Once enough clues have been gathered, it will be time to recreate the crime scene as faithfully as possible.

The A.B.C. Murders gameplay experience is quite varied for a point and click adventure game, but it has some shortcomings that might be hard to overlook for some. First of all, the game is not challenging at all: everything that players can check out in each location is required for the investigation, so moving the cursor around is more than enough to find something new when not knowing what to do next. In case this method doesn't produce results, it's possible to use the Clue system, which will move Poirot closer to any object players might have missed, or provide a partial solution to any puzzle. The Clue system is definitely a good idea for those who just want to follow the story, but it's too easy to abuse it, as players just need to wait around one minute to get another clue. This system is not required at all, but the temptation to use it is always around the corner, especially during the slightly more challenging Thinking segments. 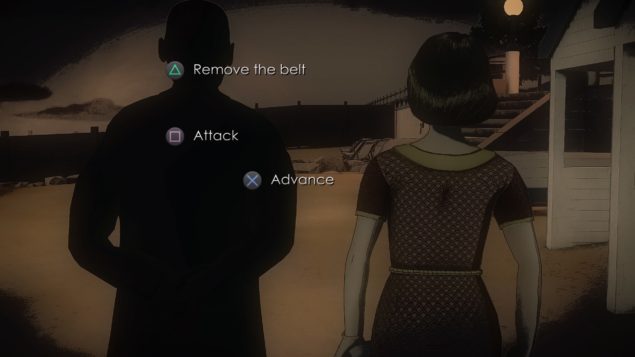 Another very nice touch are the Ego Points, which are awarded by performing actions as Poirot himself would during the course of the investigations. Collecting all of them is the only true challenge of the game, as it requires players to always pick the right questions and answers during the course of the game, to not miss any of the mirrors in the game and more. The rewards for collecting them are not all that great, but they provide a good incentive for completionists to play through the game again.

The A.B.C. Murders presentation is a mixed bag. The game comes with a nice looking cel-shaded graphical style which enhances the game's vintage atmosphere, but there's plenty of aliasing and even some performance hiccups on PlayStation 4, so the game doesn't look perfect all the time. Voice acting and soundtrack also leave something to be desired, with just a few tracks that get repeated often and the delivery of lines sounding a bit forced at times. 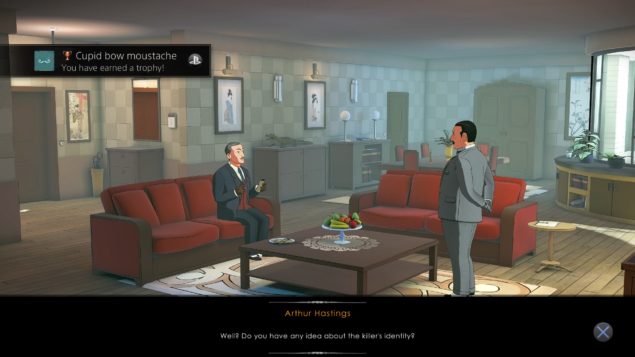 Agatha Christie: The ABC Murders is a competent point and click adventure game that doesn't really bring anything new to the table. The short duration of the adventure and low challenge level are definitely issues, but the nice plot, charming characters and varied gameplay experience make this short adventure quite enjoyable.