A Story About My Uncle by Gone North Games Review 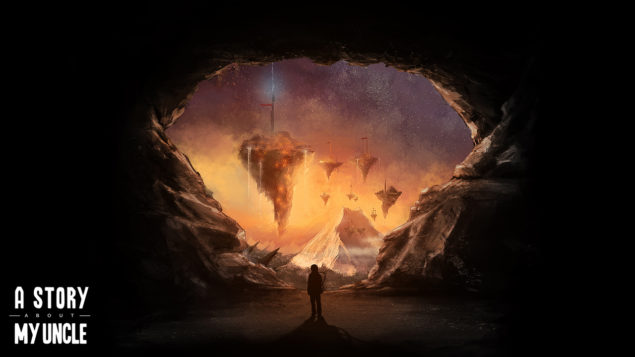 This year has been a great one for smaller studios with big ideas and even bigger talent. Sitting down, looking at my ever-growing Steam library, I am constantly reminded that, more and more, the experiences had with the titles from the twenty men (if that) teams are time and again trumping that which we are seeing from the three-hundred man teams and their million dollar marketing budgets.

After finishing A Story About My Uncle, I am happy to say that it can count itself on that list. What's more, I may have just found my current favorite title of the year thus far. The game places you in the young shoes of a nameless protagonist in the search of his recently gone missing uncle, Frederic. The story is told by a now older version of the protagonist to his daughter in the way of a bedtime story. This way of presenting the story to the player doesn't just present itself and then let the game take care of itself. The more mature version of the character in question acts as narrator through the entire experience, giving context not only to the events taking place, but also to separate, secondary elements of the universe; used to help build a better sense that the locales you find yourself in are that of a real, living, breathing place.

He also presents his past statements in the third-person, rather than letting the earlier version of himself – the one whom the players themselves control – speak during their brief moments of what would be dialogue. It's an interesting way of doing things. Largely unneeded, mind you, but it certainly gives the story that extra little kick of character just for the sake of it all. Unneeded, but interesting nonetheless, and I feel it adds something to the storytelling as a whole. 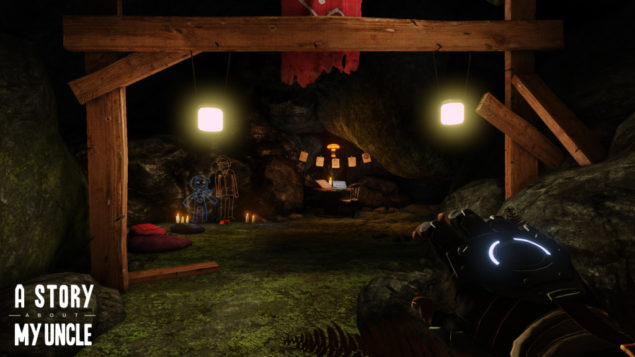 What I do feel the need to comment on, however, is the lackluster voice-acting found throughout the majority of the game. While characters such as Maddie – a rather interesting character you meet about a third the way through the game – as well as said uncle to which the title is concerned, Frederick, are the odd standouts in the game; bringing their characters to life in a major way, despite only having a rather limited window to do so, the others don't fare nearly as well. The player character made narrator does a poor job at his second descriptor, as does the character of his daughter. The more that I think about it, actually, it seems that the only two that don't quite meet the cut, barring the aforementioned Maddie, are those that players will find themselves listening to the most throughout the experience. Sad as that is, it doesn't do all that much to pull players from the otherwise well crafted experience on offer, luckily. 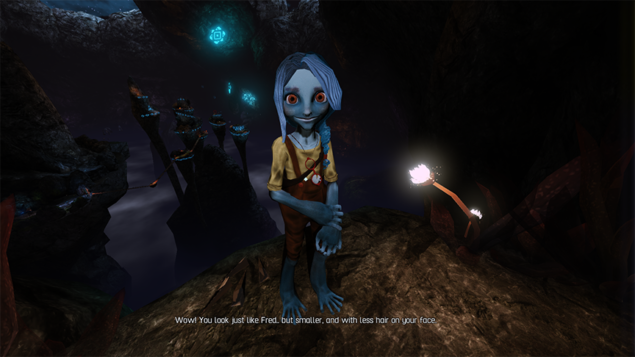 Speaking of well crafted, I can't get over the world the developers managed to bring to life with this one. Generally speaking, the game is gorgeous. A fantastic art style meets a warm, entirely charming world that is just a pleasure to behold. Admittedly, I am a sucker for a nice looking game and setting, but the world of A Story About My Uncle is a rather welcoming one and it was a joy to just take a break, walk around and soak it all in. In trying to best describe the overall look of the game, while it certainly goes for a somewhat realistic look, it also includes a somewhat exaggerated color-pallet with a heavy use of warm colors throughout most of the game, though also ties it in with somewhat cartoony touches overall.

In general, it's just an inviting, beautiful game that creates a gorgeous setting for the players while not destroying their rigs in the process. Which then brings us on to the story. Mind you, the story is short and giving away even a little is to give away a lot. As was stated earlier, the game begins with the protagonist deciding to go searching for his now missing uncle. Upon entering is workshop – an almost daily ritual for the boy – he happens across a suit that just so happens to fit him like a glove. 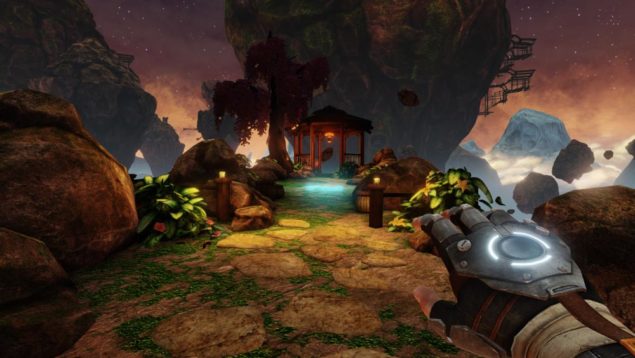 Making his way to his uncle's observatory, the child, in all his boyish curiosity, decides to flip the lone switch to be found, thus setting off a chain of events for the players to see through. The computer next to it buzzes to life, an alarm goes off, and the boy finds himself gravitating to the center of the room, the dome above him opening up, and soon he himself being blasted to the outer heavens and to a land never seen before – one of mountainous rock formations suspended in midair and inhabited by an almost reptilian species at least somewhat resembling a human being. And this is where the adventure really begins.

The main goal of the game, which I stated earlier, is to find out just what happened to your uncle. In doing so, players are tasked with sprinting, grappling and even rocketing (an ability granted later in the game) – all skills granted by that ever helpful suit of yours – across the dangerous, self-suspended cliffs of this interesting new world you've come across. Suffice to say, A Story About My Uncle falls into the category of easy to learn, hard to master. 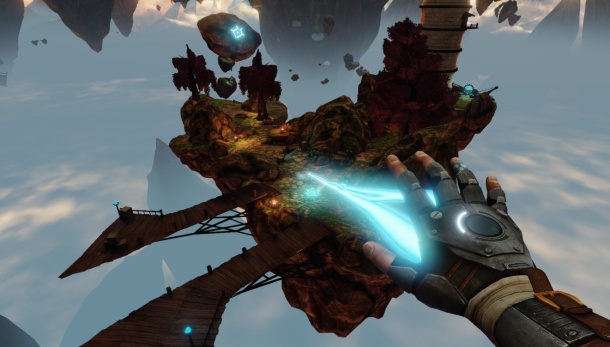 Mechanically, it is a rather simple game. Markers are even left for the player to help guide them in the right direction. Not that there isn't the odd occasion where a bit of exploration is offered to the player, mind you. But it is a simple game nonetheless. While I had a bit of an issue early on in the game when trying to get used to the overall feel of the grappling mechanics, I soon found myself sprinting around the world, using the momentum of the grapple to shoot myself to far off cliffs as if I had been doing for hours.The overall sense of speed and feel of the momentum creates what I found to be an incredibly engaging and entertaining experience. First-person is not often something handled all that well when it comes to platforming, but the guys over at Gone North Games managed it and managed it well. As for the platforming itself, the layout of the world presents itself as a sort of puzzle for the player to solve. It requires players to know just when to take advantage of that grappling hook of theirs, to pay attention to their overall momentum and to really be paying attention to everything around them.

Though the game lacks any repercussions for missing your mark (fall and the game simply respawns you at the nearest checkpoint), the game still manages to be rather challenging in certain sections and there were quite a few times where I just had to sit there for a minute and plan out just how I was going to tackle the section in front of me. Again, easy to learn, hard to master. And that's always a sign of a well designed game. If your title is easy to pick up, though challenging but not to the point that it turns people off, you are doing something right. And A Story About My Uncle is something very, very right.

And with that, what about that options menu? Performance? Sadly, the options menu is about as bare-bones as it gets. Outside of options for resolution, V-Sync and an FOV slider (thank you), there's really nothing there for players to fiddle with. While not the most technically demanding game around, the title is still a rather good looking game, and players with weaker setups would definitely benefit from a more diverse and accommodating options menu. Luckily enough, however, this title does seem to be rather well optimized. On my setup (GTX-680 and an i5-3570k) I was averaging around 140FPS (once I did an override on the game's locked 62), never dipping below 100. So, while more options would definitely be appreciated sometime down the line, anyone with even a modest gaming PC should see decent performance from this one. As far as the controls go, I played the game switching between both the 360 pad, which is supported natively, and keyboard + mouse. I am happy to confirm that both handle the job rather well, and I would even go as far as to say that the keyboard + mouse setup will probably be the optimal route for most, considering some of the twitch-moment platforming the game requires during certain sections of the game. 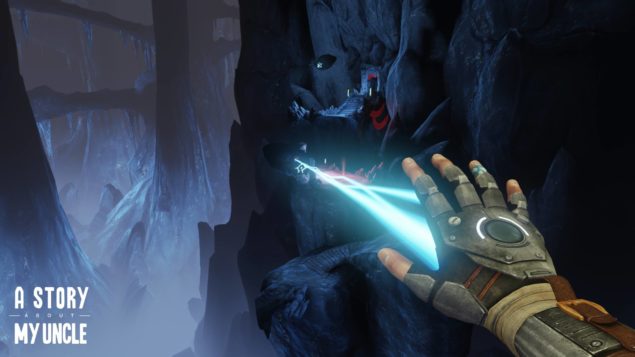 Short, but sweet, A Story About My Uncle proves that a game doesn't have to engross you with dozens of hours of content in order to sell itself as a worthwhile experience. And while, yes, a longer story may have served to better flesh out a few underdeveloped parts of its overall narrative, what is on offer is something I, personally, found rather special. Clocking in at just over two hours, this might be a hard sell for some at its asking price. I, however, have always felt that a short, yet strong experience can, and often times is, worth more than a ten hour experience with more than its fair share of padding. It is a touching, well-written and engaging experience throughout, and while there is little on offer to warrant a second playthrough any time soon, if at all, it is an experience I know is going to stick with me for quite some time. A game not without its own caveat or two, A Story About My Uncle is a fantastic time and is a project that developer, Gone North Games, should be extremely proud of.