It's a well known fact that ninjas excel when working swiftly in the shadows, but one ninja in particular managed to be even faster than the others, stopping an army of evil robots from conquering the world in a very short amount of time. As there's never a lack of bad guys, this incredibly fast ninja has to get back in action in 10 Second Ninja X to save his friends and prevent another madman to have things go his way.

10 Second Ninja X's premise is just as silly as its predecessor's. In the new game, the nefarious Captain Greatbeard kidnapped the titular ninja, trapping his forest friends inside robots in the process. To rescue them, the ninja will have to defeat these robots in 100 stages within 10 seconds.

Fans of Sonic the Hedgehog won't fail to notice that 10 Second Ninja X's story is pretty much a parody of the classic SEGA series. The whole "animals trapped into evil robots"is pretty much the premise of the original Sonic the Hedgehog, Captain Greatbeard bears a striking resemblance with Dr. Eggman, and Benji, who tries to join the ninja in his quest, but fails miserably every time, is clearly inspired by Tails, Sonic's long time sidekick. Such a story is not meant to be taken seriously, and the hilarious banter between characters greatly enhances the carefree and cartoonish atmosphere of the game.

Like the original game, 10 Second Ninja X is a rather simple, yet very enjoyable game that doesn't take that long to click. The game is basically a high speed platform game enriched with puzzle game elements, where players only have 10 seconds to clear each stage of all evil robots. These evil robots can be disposed of with a short range attack and a long range one, which can only be used three times in each stage. Depending on the completion time, players will be graded with a different amount of stars, between 1 and 3, stars that are needed to unlock more stages and content. 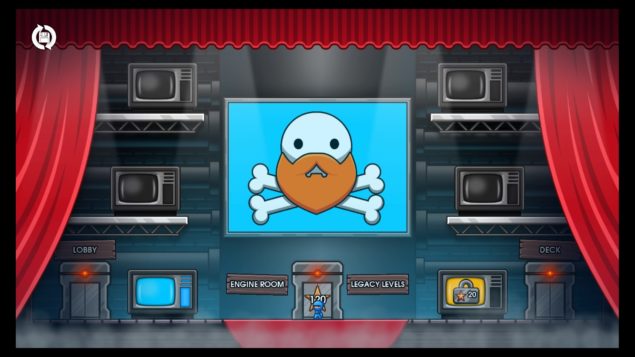 10 Second Ninja X starts rather simple, with the first couple of worlds easing the players into the experience. Later ones, however, are way more complex, featuring different enemy types as well as a variety of contraptions and additional elements that bring the puzzle game elements into the forefront.  Despite their higher complexity, it's not difficult to complete even later stages, but getting a 3 Star rating can definitely be challenging, Thankfully, the game is never truly frustrating, also thanks to the Hints system, which allows players to unlock hints with tokens obtained by playing a very simple mini-game. Those who just want to clear the game without delving into additional Legacy stages lifted from the original 10 Second Ninja probably won't need too many hints, as it's possible to see the game's ending without having to master each and every stage.

Those looking to complete 10 Second Ninja X at 100%, on the other hand, will require any help they can get. In addition to regular and Legacy stages, the game also features Marathon Mode, which sees players going through all stages of any world in a single run, with the final grade awarded at the end of each run taking into account obtained stars, total deaths and total used shurikens. Marathon Mode is where the 10 Second Ninja challenge truly is, and only those who have mastered the game will be able to get the best possible grade for each world. Those with competitive aims will also find leaderboards for each stage, which provides an additional incentive to replay stages. 10 Second Ninja X also offers content for those who like slower platforming experiences: there are some collectibles to find on the game's main hub, and there's even different skins, some of them requiring players to work rather hard. 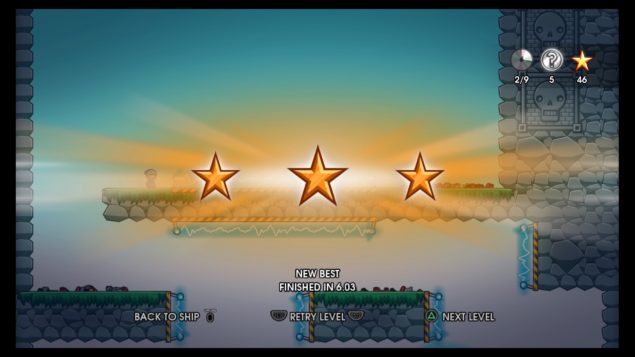 With the humorous tone being so prominent, the 10 Second Ninja X presentation is as cartoonish as it can get. The game sports a very simple yet clean 2D look featuring some charming characters and colorful locations. Performance is also solid, with the game running at 60FPS at all times on PlayStation 4. The soundtrack isn't anything memorable, but it gets the job done, not counting some uncomfortable moments where music tracks seem to overlap.

10 Second Ninja X is the quintessential indie platform game, featuring a challenging yet fair gameplay experience that's very easy to learn but much harder to master. With its humorous tone, addictive high speed experience and good amount of content, 10 Second Ninja X is a game that all platform and puzzle games lovers will surely enjoy. There are times when the game might get frustrating, but finding the way to clear a complicated stage is part of what makes 10 Second Ninja X so compelling.

10 Second Ninja X is an addictive high speed platform game sporting some puzzle game elements which enrich the experience considerably. With its fast paced experience, smooth controls, good amount of content and replay value, 10 Second Ninja X is a game that no fan of platform games should pass on. The easy to learn, harder to master type of experience also makes it perfect for those who never considered playing a similar game. Highly recommended to all those looking for a fun and not excessively involving experience.