It has been some a few month since AMD launched their latest Volcanic Islands based Radeon R9 290X and Radeon R9 290 graphic cards. The graphic cards have proved as a strong competitor against NVIDIA's Kepler based lineup due to their amazing price and performance ratios plus the fact that you can unlock the $399 Radeon R9 290 into the full Hawaii XT chip with a simple BIOS flash (atleast while quantities last).

While their are many reasons to buy the card, there are still some issues which haven't been addressed by AMD with their new cards. The Radeon R9 290 series cards as the Volcanic Islands branding suggest run hot and when we say hot, i mean really hot. The Radeon R9 290X has been seen hovering around the 95C range at its 1000MHz clock speed and while AMD suggests the maximum threshold of the card is around 105C, the higher temperature results in louder noise when Uber mode is under operation.

These issues will be fixed when AMD let's AIC partners release the custom Radeon R9 290 based graphic cards by the end of this year and we may see some new models and designs pop up around CES 2014. But there's a second issue to be addressed that has been spotted by PCPer and LegitReviews took some action regarding this matter and performed their own tests by comparing the retail samples and review samples that were sent out to press members of AMD. Ryan Shrout of PCPerspective had to say the following:

The biggest problems I found were in the highly variable clock speeds from game to game and from a "cold" GPU to a "hot" GPU.  This affects the way many people in the industry test and benchmark graphics cards as running a game for just a couple of minutes could result in average and reported frame rates that are much higher than what you see 10-20 minutes into gameplay.  This was rarely something that had to be dealt with before (especially on AMD graphics cards) so to many it caught them off-guard. PCPerspective

It turns out that ambient temperatures play a significant role with the new PowerTune 2.0 algorithm which has been implemented in the Radeon R9 290X and Radeon R9 290 graphic cards. The Radeon R9 290X retail sample from Sapphire clocked down to an average frequency of 869 MHz compared to 930 MHz on the review sample and from the following chart, you can clearly see that the retail card throttles much earlier under operation of it being compared to the review unit. 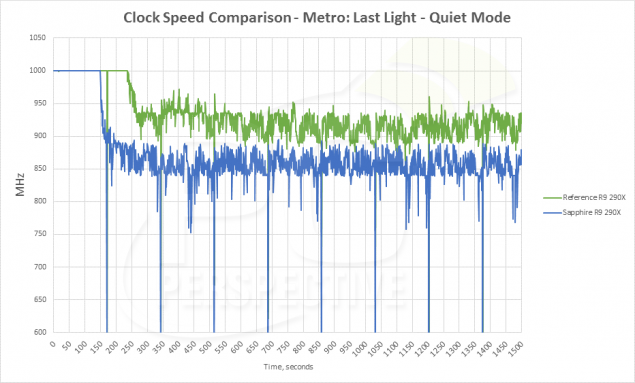 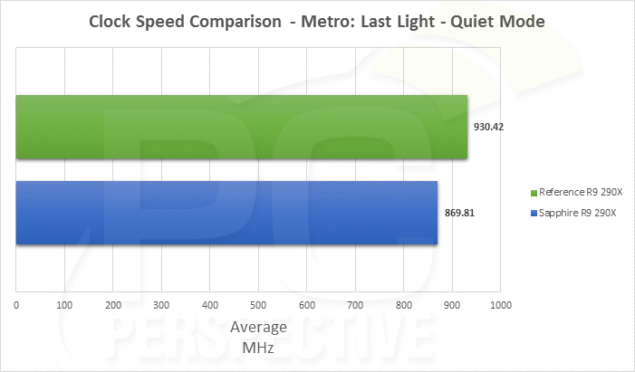 However, some testing by LegitReviews reveals that the BIOS was the actual culprit behind this matter. The R9 290X retail samples were shipped with a different BIOS compared to the one's featured on the review units. The R9 290X was flashed with the review sample BIOS by LegitReviews and it pretty much eliminated the variable differences between the two cards. This however brings up the question as to why wasn't the same BIOS featured on the retail models. Here's what LegitReviews has to say:

So, did AMD put a special BIOS on the press cards to influence the reviews or are the add-in board partners using an older version? We aren’t sure and will likely never know the answer to that. AMD did inform us they are working on an improved BIOS for the AMD Radeon R9 290X and we hope to get our hands on it in the near future. From our perspective there are various BIOS versions being used and it looks like the media cards are using a variant that holds the clock speeds up higher for an extended period of time and the clock speeds also don’t drop as low. It should be noted that this performance variance is really only significant in quiet mode as that is when the new AMD PowerTune technology is busy trying to keep the card quiet. LegitReviews 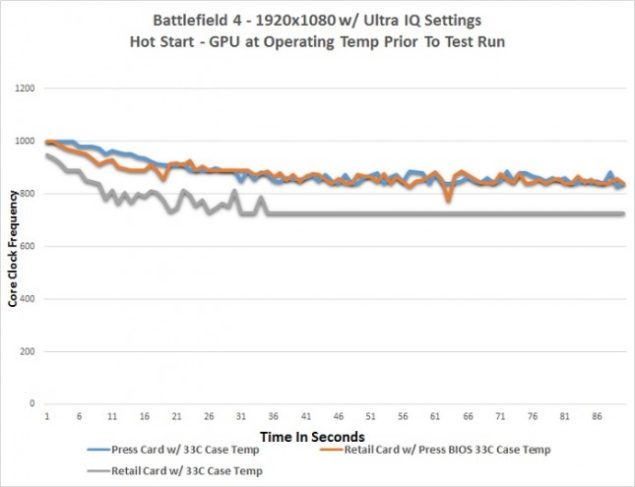 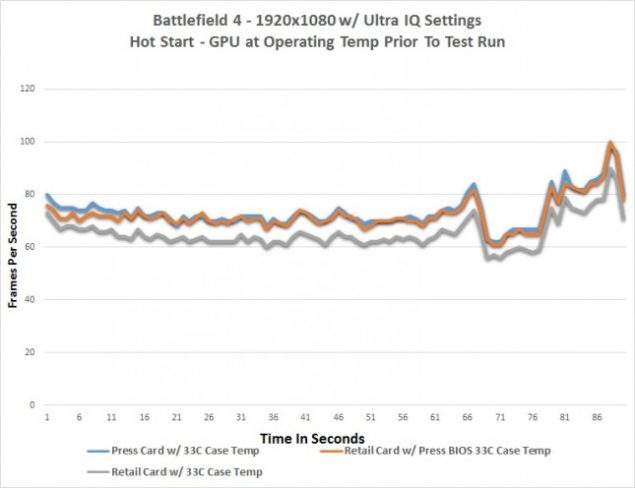 Ryan also has a point that AMD should define a specific base clock like NVIDIA's graphic cards on their GPUs so that clock variance issues don't occur again.