With the release of the latest PlayStation 4 and Xbox One video game consoles, the gaming industry has become brighter than ever, but it is not only the consoles that are contributing towards the growth of the industry. PC gaming might not be something that is all over the internet right now like the latest consoles, but it surely is one of the pillars that are keeping the gaming industry in place. According to a latest Jon Peddie Research report, PC gaming hardware market now stands at more than $21.5 billion worth. 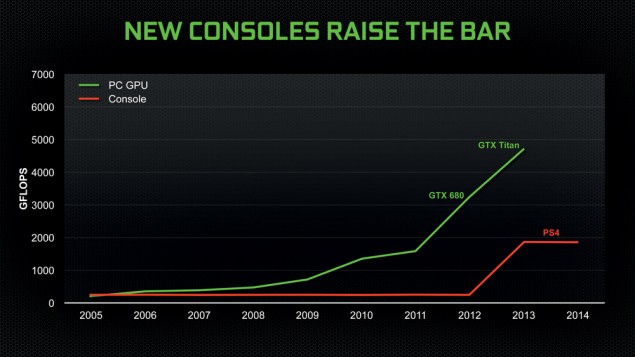 In everything that is currently going on in the gaming industry concerning the PlayStation 4 and Xbox One consoles, it looks like PC gaming is somewhat fading away from the media front, but despite the gradual decline in demand for home PC hardware, the market for gaming specific PC hardware is actually doing really well. As a new Jon Peddie Research report (via MCV) claims, the total value of PC gaming hardware market worldwide is more than $21.5 billion, that is twice the worth of console gaming market, and it is predicted that the figures will grow significantly over the next three years.

According to the analyst firm’s PC gaming hardware market report, "computers, upgrades and peripherals used for gaming" remain strongly in demand throughout the globe. This makes it quite clear that the arrival of the latest consoles has not made much of an impact on the momentum of the PC gaming, and that the figures will grow instead of decreasing in the future. This is not because the demand for home computers is growing (it is not), this is rather due to the fact that dedicated PC gamers are not stopping from throwing more and more money at their rigs. Ted Pollak, the firm’s senior gaming analyst, said:

“Committed PC gamers are generally not interested in pure content consumption platforms. They are power users and pay thousands for the ability to play games at very high settings and then do business, video/photo editing, content creation and other tasks with maximum horsepower at their disposal in a desktop ergonomic environment. Nvidia, Intel and AMD have enthusiast CPU and GPUs that are so powerful that, when combined with SSDs and fast memory, they absolutely trounce the computing power and gaming capabilities of the newest console generation. Being able to drive 3840×2160 (4K) is already a reality for the highest end configurations and the mass market is now able to push 2560×1440.”

The report predicts that the current $21.5 billion PC gaming hardware market will reach a total value of more than 23.2 billion by 2017, due to the availability of powerful hardware that allows PC gamers to have more than what the consoles offer. Any shift that is occurring at the lower end of the spectrum in the PC Market is more than compensated for by more flow of money in the mid-high end segments. And unlike the mobile and console segments, PC Hardware enthusiasts are usually reliably loyal. So the real question that we must ask is, why do companies favor the console more then the PC platform?

Microsoft is probably one of companies without which the PC platform would have been impossible, yet we see them focusing entirely on the Xbox with the PC left behind as a step son. So if the pseudo father of the platform can't treat PC respectably why should anyone else? The piracy excuse is also thrown into the mix as much as possible but the fact of the matter is that piracy is now as much on the consoles if not more. Granted that Next Gen is relatively safe till pirates crack the code completely, it still remains only a matter of time. DRM is linked to the favoritism of course but perhaps the primary reason is that without console exclusives far and wide, it would become somewhat difficult to justify 5 - 8 years of technological stagnancy. I myslef am a Console Gamer primarily but I see the need for Developers to get over the PC complex and start treating platforms equally, just like the demise of PC Gaming is greatly exaggerated, similarly consoles cannot and will not be abandoned just because the same game is available on PC.