Well known for his extreme overclocking records with EVGA products, Kingpin has now taken Nvidia's Kepler GK104 based EVGA GTX 680 upto a staggering 1958 MHz on the core clock. That is just 42 MHz short of the massive 2GHz barrier! 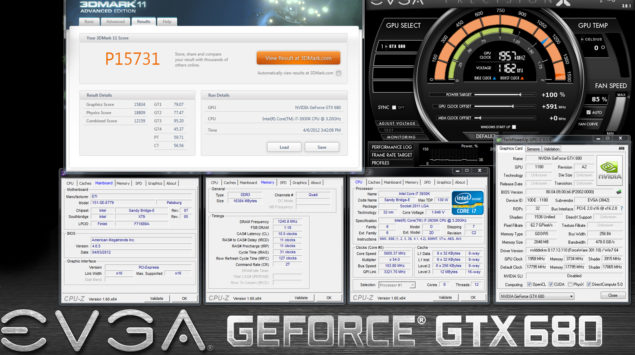 Kingpin keeping all his hardware components as usual on LN2 cooling, took his Intel Core i7 3930K to a mammoth 5.6 GHz with an unknown brand of 16GB DDR3 rams running at 2400 MHz and off course a non reference GTX 680 Kepler card courtesy of EVGA.

Kingpin this time had managed to take the core clock to 1958 MHz and memory clock at 3734 MHz as opposed to the stock reference clocks that are set to 1059 MHz (Boost) and 1502 MHz respectively. The card reportedly has some serious modifications done to it such as more beefy VRMs as well as using EVGA's 'The Untouchables' cards. The card therefore reached quite a staggering 3D Mark 11 score  of P15731 3D marks!

It is indeed quite a feat to get to those speeds but under the hands of kingpin, nothing is impossible (provided you have the funding for the project offcourse). Here's an example of what kind of mods that the card might have done to it by kingpin:

You can check more in depth details on how to maximize your GTX 680's core potential here.