Users can run Android apps on their computers using various methods, however, it is hard to find a solution that gives you Android in the right way. While App Runtime for Chrome (ARC) lets you use apps on your computers, it's only the apps on top of the Mac or Windows interface. A team of ex-Googlers and founders of Jide have introduced Remix OS 2.0 - a full multi-window desktop operating system that runs Android apps on your computer. 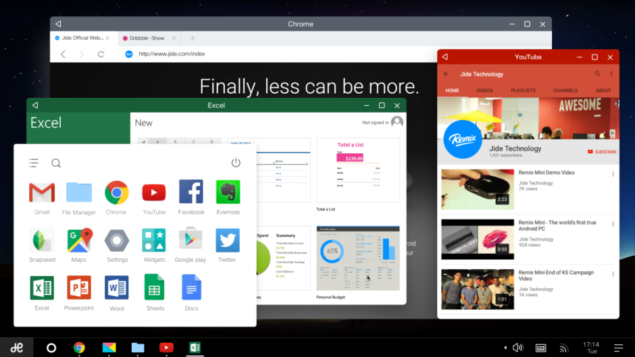 With Remix OS, Jide wants to bring Android to your Macs and PCs. Instead of simply working as an application inside a window in your current operating system, Remix OS gives you a similar experience that you get on an Android tablet, replacing Windows or OS X. Giving familiar looks of a desktop, the OS features a Start menu where you can access all the apps, notification tray that you can swipe, task bar, and other such features taken from Android, Windows and Chrome OS.

Remix OS is basically a customized fork of the software that aims to give you a desktop feel (with an ability to right-click!) where you can run apps in fullscreen. Built on Android-x86, Remix OS works on most of the Mac and Windows computers. Jide has also built a Remix Mini device for $70 that can run this operating system on any screen with a HDMI input.

Powered by Remix OS, Remix Mini allows you to work and play with the entire Android app ecosystem while taking full advantage of intuitive PC features such as a taskbar, multiple window multi-tasking, mouse and keyboard support.

However, if you don't want to buy the device, you can download a system image on a USB stick, or you can create a partition on your computer for a more permanent solution. It comes for free and takes less than two minutes to boot up. Jide has also promised to send OTA updates to improve the Remix OS 2.0 in the future.

Users will be able to download Remix OS on January 12 from jide.com.