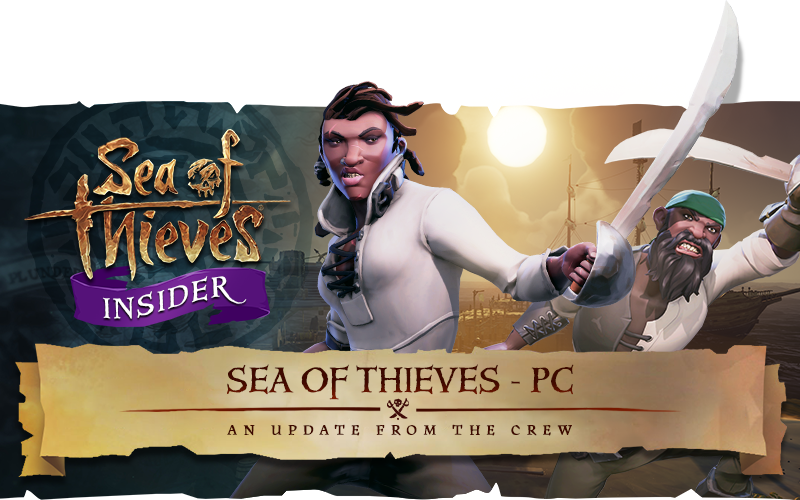 In a recent newsletter, legendary UK studio Rare talked about their philosophy with Sea of Thieves on the PC platform.

The newsletter stressed that Sea of Thieves on PC won't be a port at all since the Xbox One and PC version are being developed "in sync" by Rare. The final part also pretty much confirmed that the game has been tested on 21:9 and 144Hz monitors, so it follows that the final version should also support these features.

Less port, more starboard
We’re building Sea of Thieves on Windows 10 in parallel with the Xbox One version. It’s important that players on all platforms are in sync, which has the added benefit of being able to support great features like Xbox Play Anywhere. This means the more traditional “port” approach of bringing games to PC simply wouldn’t work for us. Whenever we’re working on a game feature, Lead Designer Mike Chapman and I discuss how the feature will work across both platforms. Most of this boils down to a discussion around UI and control input, but with some features we get the opportunity to (excuse the pun) push the boat out a little more. An example of this, which those of you might have seen in our videos, is the inventory radial UI. On Xbox One this is controlled with the analogue stick, but on PC this is controlled with the mouse (although of course you’re more than welcome to use a controller as well!). Both platforms have their sensitivity fine-tuned separately, but the core underlying feature is the same. This means that players who take advantage of playing across Xbox One and PC will have a consistent experience, which is very important to us.
Testing back at port
We also have 24 different devices in our own testing labs, 12 laptops and 12 PCs, which cover a wide range of specs from low-end machines all the way up to the overclocked 4K monsters. They’re all equipped with different keyboards, mice and monitors, with my personal favourite being the beautiful 21:9 curved monitor (144Hz!), so that we have a good spread of inputs. It’s certainly a race to the best PC each time we have a playtest! In all seriousness though, each machine is important in its own way, as we know that the minimum spec is crucial for us being able to invite more people in to share the world with us, the medium spec will reflect the most common setup in the wild… And the 4K setups are just, well, awesome. One thing that unites all of these players is their expectation around stability, so we’ll keep working hard as we’ve set this as our number-one goal.

Sea of Thieves is still currently in Alpha testing. It should reach beta phase later this year on PC and Xbox One; in the meantime, check out our preview from Gamescom 2016.
Share Tweet Submit