3D Mark's Hall of Fame is one of the most prestigious proving grounds for Overclockers all over the world and recently it has been dominated by Nvidia products. However the pros over at OcUK have landed the top spot with AMD's R9 290X. There are four categories in total, Single GPU configurations, Dual GPU Configurations, Triple GPU Configurations and Quad GPU Configurations. OcUK's 8Pack Overclocking team is the top dog at the Quad SLI section with 4 R9 290Xs. 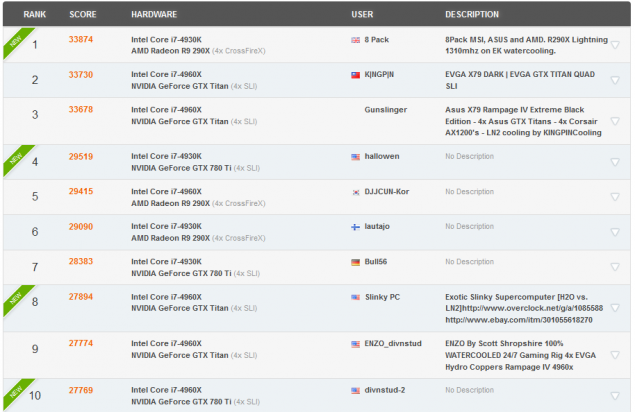 Overclockers UK's (eh) 8 Pack team is a well known bunch of enthusiasts and they have proven their metal once again (and of the R9 290X) by smashing the Quad Config World Record with their AMD powered rigs. For those interested they used retail MSI Lightning R9 290Xs to get into the Quad GPU Hall of Fame of 3dMark. The complete specs were 4 Way R290X Lightning, 4930K, Corsair Dominator plats C9 2730+ and EK Water Cooling

This adds another badge to 8 pack's growing list of achievements this year:

As you can see the Single GPU, Dual GPU ad Triple GPU configurations are dominated primarily by Nvidia Products however 8 Pack have gone on to prove that Overclocking depends on as much as your skill as the tools. And thats not all, 8Pack managed to achieve a record breaking clock with just plain old water cooling, which is a pretty impressive feat in itself.

GALAX Hall Of Fame Gaming RAM Is Able To Achieve A Phenomenal Frequency Of 4,000MHz

GTX 660 HOF (Hall of Fame) by Galaxy, Pictured along with Price