Wow, these are probably the most interesting benchmarks i am ever going to post. If you remember D Wave has the honor of being the world's first quantum machine. A Quantum Annealing Optimizer to be precise. A full introduction on D Wave can be found over here. However we finally have some benchmarks, and lets face it everybody loves benchmarks. Whats even more interesting about these benchmarks is that quantum computer was pitted against Nvidia Hardware consisting of multiple Nvidia GPUs and a Custom Tailored Solution.

The D Wave Quantum Annealing Optimizer is basicaly a 512 Qubit system (Yes Qubits, not Bits). It costs an arm and a leg so Google and Nasa are on a shared venture to discover its secrets and find the problems which can correctly utilize the optimizer. Quantum Annealing works by finding the lowest energy state or the Global Minimum of a given function. The Nvidia GPUs were basically running software designed to simulate  Quantum Annealing. Here is a little diagram I made to make it easier to understand.

The black line is a function and the balls indicate the starting point of a true Quantum Annealer and a Simulated One. Now the simulated quantum annealer will go through the entire function trying to get to the global minimum. While as a Quantum annealer will just cut through the graph to get to the lowest energy level. Imagine yourself standing behind a hill. The ground after the hill is on a lower height than the ground behind it (where you are currently standing).  Now to get to the lower ground you will have to climb up the hill and back down again. This represents what conventional hardware does. However if you could just walk through the hill in a straight line to the lowest ground, that would be Quantum Annealing. Anyways without any further ado, the benchmarks of D Wave against Nvidia and Custom Hardware. 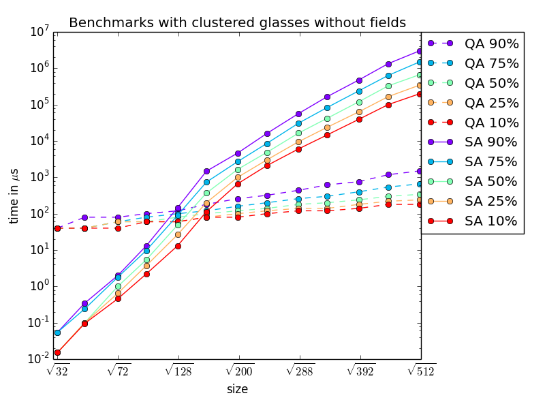 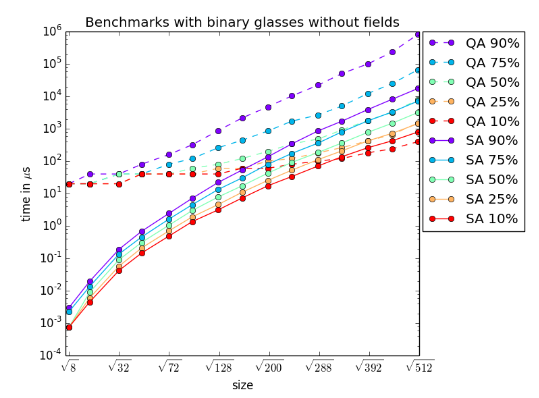 The Dotted lines represent the Quantum Annealer and the solid lines represent Nvidia GPUs and Custom Hardware running  a simulated problem solving solution. in this graph lower is better. So as you can see, the conventional Hardware is actually beating the Quantum Annealer by quite a margin at lower difficulty.  However as difficulty increases exponentially the time taken by D Wave remains approximately the same while the time taken by Nvidia GPUs increases proportionally. Basically it means that a Quantum Annealer will fare well in problems of greater difficulty as opposed to problems with low difficulty or random difficulty. It also tells us that the chip of the D Wave System is in very primitive stages.

Though Google is very optimistic but it has figured out one or two defects that keep the Quantum Computer from realizing its true potential. Observe the diagram above. The qubits of the D Wave are connected in a Sparse Connectivity fashion. ie they are connected in a Branching fashion. They are not maximally entangled. ie Every Qubit is not connected with every other Qubit Directly. Also it has figured out that 3 Qubits are actually dead. Guess even Quantum Supercomputers aren't free from manufacturing defects eh.  So there you have it folks, the first benchmarks of D Wave.