Chip maker Qualcomm, whose products are used in some of the world's top smartphones, including the Samsung Galaxy S5, has announced two 64-bit additions to its line of SoCs manufactured. The Snapdragon 810 and 808 both feature ARM's A57 and A53 cores. The 810 has a 4 big + 4 Little configuration while the 808 has a 2 big + 2 Little configuration. Qualcomm explained the shift to the new configuration as a reaction to the changing demands of the market in the demand of the 64-bit models supported by ARM cores; a change possibly started by Apple's release in the iPhone 5S. 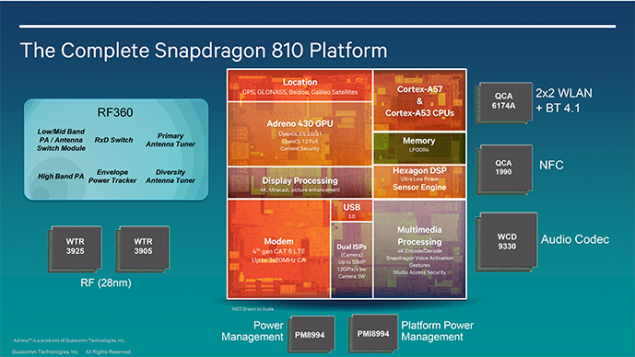 In addition to the adding of the A57 for high power tasks and the A53 for lower level ones, the 810 also has the modem integrated directly within the SoC die. In terms of connectivity, the Cat 6/7 on both the chips, has the capability for 20 Mhz exaggeration capability to achieve 300 Mhz down link speeds. In terms of GPU, in the 810 the GPU has been upgraded to the Adreno 430, which should bring significantly improved performance and lower power consumption when compared to the 805. It also shows Qualcomm's focus to the 4K display and an increase in 3D graphics capability. The 810 supports two 4K displays at 30 fps, while the 808 has support capability for 2560/4Mp primaries.

This level of pixel pushing requires significant memory capabilities as well. The 810 has two channels of the latest LPDDR4 with a bandwidth of 1600 Mhz. The LPDR4 will allow programs to run faster while cutting down power consumption. The 808 on the other hand has 933 Mhz of LPDR3 and both the two channels. In the ISP department, the 810 has been upgraded to support 14 bit dual ISPs, with the 808 possessing the same 12 bit capabilities as the 805. The two ISPs in the 810 run at 600 Mhz each, giving a cumulative speed of 1.2 Ghz. The 808 is believed to possess the same image quality enhancements of the 810. In addition, the 808 is the first Snapdragon to be manufactured using the 20nm manufacturing process. This is an upgrade from the 28nm used in the previous models.

With the Snapdragon 810 being the flagship model and the 808 a budget, low performance variant, we can expect manufactures to turn more towards the 810 for their flagship devices. Qualcomm itself seems to be focusing towards the 810 more. Both the Snapdragon 810 and 808 are expected to be available for sampling in the second half of this year and shipping in devices at the start of 2015.