AMD has delivered its APU to both the Xbox One and PS4 in the form of Bonaire and Pitcairn GPUs and Jaguar Cores. The PS4 according to last known reports had 1152 SPs and 8 Jaguar Cores, but guess what, information has surfaced that shows 128 SPs completely unaccounted for.

Well before everyone blows the gaskit, keep this in mind: Even though the logic of the source is undeniable it could very will be that the SPs are dead (Yield) and left over in the fab process. Meaning that they are as good as useless. However i will admit this that the probability of them merely inactive is far greater than permanently deactivated. Ok here it is. The leak source this time is Chipworks.com. They apparently took a tear down of the PS4 APU and noticed something peculiar.  There are 20 groups of 64 SPs. 20x64 = 1280. That is 128 more than the official record of 1152. 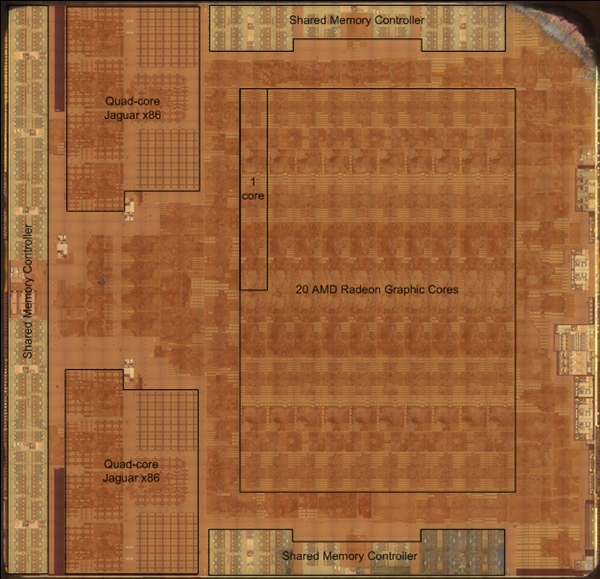 Notice how there are 20 AMD Radeon Graphic Cores. We know each core is a group of 64 Stream Processors/Shader Cores/ALUs(Whatever it is you want to call them) and 20x64 =/= 1152. Infact we previously thought there would be only 18 cores, but as you can see there are 20. So we basically have 2 Full Cores out of 20 unaccounted for. That is 10% of Pitcairn's power right there.

An Update by Sony  could Unlock the remaining 128 SPs or are they already working?

There are basically three possibilities. 1) The 128 SPs are 'dead' (Yield) and permanently deactivated. There are ways to do so. 2) Those SPs are active and are hidden to provide extra juice (unlikely). 3) Those SPs are inactive and can be reactivated by Sony. Now it is option 3 that takes our fancy. If the going gets tough later down the road, Sony can just release a 'miraculous'  patch that will boost the PS4's GPU 'Pitcairn's power by 10%. Which is quite a decent amount we might add. Although the fact remains that both of the deactivated CUs will not have a 100% success rate for every PS4 owner (Yield again).

#PS4 Appears to have 128 Stream Processors completely unaccounted for? Ace in the Hole #Sony? http://t.co/sTd6F6v6K1